US Presidential Election - The Washup 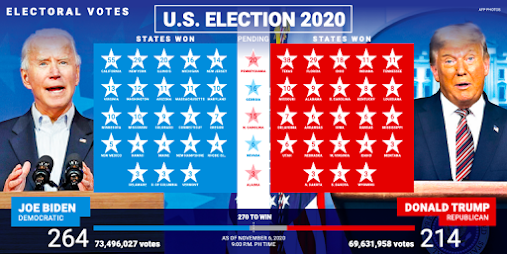 I've deliberately avoided commenting on the outcome until today because I was (naively perhaps) waiting for Trump to concede, something that every other previous defeated candidate has done once the results are clear.
Biden's electoral college votes are in, and they put him convincingly in front, at a level slightly higher than Trump's figures in 2016. He has been congratulated by leaders worldwide and all the media, even his megaphone (Fox) have called the vote for Biden.
The counter narrative (allegations of fraud) are characteristic of how he has always operated, and unsurprising. They are irrelevant, and will fade away as they are unsupported by evidence. His reaction, however, deepens the already broad chasm confronting the USA.
The figures are interesting. Biden has received more votes than any previous candidate in history, and his popular vote exceeds Trump's by around five million.
Trump's vote is also an improvement on his 2016 performance, and the turnout is the highest since 1900. It still doesn't match what routinely happens in Australia (72% USA Vs 91% Australia). Compulsory voting improves turnout of course, and enhances participation, one of the cornerstones of democracy. Lincoln did not refer to "some" of the people at Gettysburg -
and that government of the people, by the people, for the people, shall not perish from the earth.
The decentralised electoral system in the USA doesn't help, and is largely responsible for the ongoing chaos following this poll. Each state organises it's electoral college districts, and creates the rules applying to mail-in votes, counting arrangements and supervision. The problem with this arrangement is that whichever party controls the state administration also controls the electoral arrangements. Each party does its best to set up boundaries and arrangements that improve its chances. Hence the routine tolerated Gerrymandering.
The fact that the poll is always held on the first Tuesday in November doesn't help. So many of the conventions that continue to apply to the US process were set up over two hundred years ago. The Tuesday after the first Monday in November was chosen because the harvest would have just finished, and Sunday was for church. This left Monday to hitch up the dray and use the day for travel to the voting booth. These days, people who are on low incomes are often unable to get to vote because they can't afford to take time off work. The fact that in many parts of the USA, they have to queue for hours doesn't help. Contrast that with the ten minute pause (on Saturday) to lodge a vote in this country.
The bottom line, of course, is the gap between the popular vote and the electoral college. Australians find it hard to accept that a candidate who receives fewer votes than his or her rival is not the winner. This processes effectively disenfranchises millions, and to a degree, is responsible for a great deal of the divisions in US society. It infers that the votes of these people really don't count. The same process happens in Australia, but nowhere near to the same extent, and we have a mechanism (state and federal Electoral Commissions) that make a fair job, over time, of addressing it.
The Electoral College system was a compromise cobbled up over a period of months by delegates frustrated by a lack of progress at the 1787 Constitutional Convention. Given that 40% of the population of the Southern states were slaves, and the owners were reluctant to give them full franchise, they settled on this inelegant compromise which has, like the date of the poll, held ever since. The whole compromise thing fell in a heap in 1861, but that's another story.
So the USA is (excuse the pun) a slave to its history. The resulting chaos will continue, as it is almost impossible, given the divisions that exist, to reform out-of-date institutions and constitutional amendments.
The second amendment is probably the most stark example.
Comments closed.
Posted by 1735099 at 09:18

The evidence of fraud is coming in quickly.
Software glitches, dead people voting, massive voter dumps for Biden at 4am, just to mention the most obvious.
Remember, the Press doesn't officially call who is President - the EC does and they haven't met yet.
John Grey

Get your facts straight if you want to be seen to contribute to rational discourse.
Show me where I posted something non-factual on this topic.
You can't tell the difference between a fact and an observation.
Perhaps the blogger has forgotten the Australian systems of preferential voting
Not at all. It's a fairer system than the sudden death first past the post system that so bedevils the poor folk across the Pacific. It's one of the main reasons that we have a much more civil political discourse in this country, and less hyper partisanship.

1735099
Thanks for that post.
It's very interesting and explains a lot.
Maree

It appears the blogger's memory of 2000 is fuzzy.
Just to remind him, it was a tightly contested election so no-one conceded.
The final results were not clear until recounts had been done in Florida and the Supreme Court met to adjudicate. They ended the recounts. Bush won very narrowly.
So waiting for President Trump to concede is not unusual - precedent and the constitution tells us that he has the right to call for court adjudication.

PS The Democrats may have won in 2000 if they weren't carrying the baggage of Bill Clinton's sex scandal.
John Grey

There's that Witty girl Maree again, patting the blogger on the back. Has anybody seen the fat lady that sings when the end is here.

Funny caption at the top:
"US Presidential Election - The Washup"
Yet here we are with still no end in sight because of the emerging facts about voter fraud.
Looks like the blogger was wrong with his early call.
John Grey.

Yet here we are with still no end in sight because of the emerging facts about voter fraud.
There is an end in sight, as recognised by almost all world leaders, the American media, and the people of the USA, almost 5 million more of whom voted for Biden than Trump.
There are no "facts" about voter fraud - just allegations from Trump's administration.

Of course there are no facts about voter fraud.
Which is why Georgia Republican Secretary of State Brad Raffensperger ordered all of the state’s 159 counties to conduct a hand recount and audit of all votes cast in the presidential race, an extraordinary step in an election with unprecedented high turnout.
Which is why Supreme Court Justice Samuel Alito granted the Republican Party of Pennsylvania’s request temporarily ordering all counties to keep and count mail-in ballots that arrived after 8 p.m. on Election Day separate from those that were received before the deadline.
Which is why dead people are still on the ballot rolls and there is no guarantee that their votes were not counted.

Plenty of facts but that doesn't suit the anti-Trump narrative of the blogger. Therefore look the other way.
John Grey

I note the blogger's inner racist came to the fore in his anti-second amendment link.
Pointing to black-on-black gun violence is problematic in this day and age.
John Grey.

The concession speech is irrelevant to the official results. It's a tradition not a law.
For example, Gore conceded in 2000 and then recanted when he thought Florida might go his way and enable him to secure the Presidency.
More recounts were started and the Supreme Court was asked to rule.
The concession speech was just water under the bridge.
John Grey.

The blogger gets his facts wrong. Again.
"even his megaphone (Fox) have called the vote for Biden."
It is quite clear that Fox WAS the President's supporter, but that is now a speck of dust in the history bin.
The highly biased Chris Wallace from Fox proved that conclusively when he moderated the first Presidential debate from a hard-left position.
The majority of presenters are overtly anti-Trump, just like our ABC is overtly anti-conservative.
The great Tucker Carlson is one of the few Fox presenters with any semblance of virtue in the culture wars dividing America.
John Grey.

Another example of the blogger twisting the facts is his half hearted praise "Trump's vote is also an improvement on his 2016 performance."
No mate it wasn't just an improvement as you well know but left out.
With 72 MILLION votes, he received more votes than any sitting President in U.S. history.

Just a minor oversight of your I'm sure.
Just here to help.
John Grey.

The blogger won't admit that State Legislatures in the US and the Supreme Court are part of the "no end in sight" issue I referred to.
When he can't argue a point, he avoids it altogether.
Another example - he won't acknowledge the 2000 election result was delayed also. Counting and recounting the Florida votes, then time spent in the Florida Supreme Court and the US Supreme Court, are precedents for a drawn out battle this time.
So much for his "aftermath" thought bubble.
John Grey.

Another example - he won't acknowledge the 2000 election result was delayed also.
John Grey has never acknowledged that Friday follows Thursday.
It's obvious, therefore, that he believes it doesn't.

Resorting to childish comments, eh blogger?
Obviously you can't debate like a normal person.
For example, explain why you left out the lessons of Bush v Gore from your hilariously titled "Washup".
John Grey.

President Trump will win the race to the Presidency.
John Grey

More statistics for the blogger:
2.7 million votes for President Trump in Pennsylvania were deleted by the Dominion software.
That software is also used in many of the close battleground states. Make of that what you will, but certainly this election still has some way to go. A "wash-up" is quite premature.
MAGA.
John Grey

"John Grey has never acknowledged that Friday follows Thursday.
It's obvious, therefore, that he believes it doesn't."

OK, for a moment I'll pretend you have a functioning brain.
The Thursday/Friday argument is totally irrelevant to the election debate just as a trillion other facts are not germaine to understanding the election.
For example, when you erroneously wrote "That’s not counting Noddy Newman who resigned in February 1915.", you made a huge mistake but it's irrelevant to the US election.

However, your ignorance of Bush v Gore in 2000 leaves out a huge swathe of understanding about the 2020 election.
Not mentioning the Florida recount and court battles is either a deliberate lie by omission or total ignorance.
Being generous here, it probably wasn't written in the hard left journals you cut and paste from.
John Grey.

While the blogger promotes the hard left line that electoral fraud allegations "will fade away as they are unsupported by evidence", we see the opposite happening.
In Pennsylvania Commonwealth Court President Judge Mary Hannah Leavitt officially disqualified a number of mail-in ballots cast by state residents who failed to confirm their identities by Monday morning.