I’ve just come back from four days in Adelaide, promoting my book and visiting family.

Whilst there, I took the advice of a mate from 7RAR and visited the unit which is now based at Edinburgh on a site which was once occupied by the RAAF.

I’m glad I did – it was a fascinating visit.

A fair bit has changed since 1969. The first thing you notice is the level of security. In order to get into the base you need to phone at least 24 hours ahead, and the reason for your visit. Once there, you’re taken into a security building, your photo taken, and a special pass made up with your pic on it, which you wear for the duration.

No doubt this is a rational consequence of recent events.

When I arrived, I left my rental car (bright red Hyundai i30) outside the gate because I wasn’t sure where to park. I was met with a fairly alarmed-looking civvie in security uniform who ushered me and the car to a parking area to the left of the security building.

His alarmed expression was a consequence of the fact that an obviously rented vehicle was parked close to the boom gates – apparently a scenario that was in the training manual.

7RAR has changed a bit. There are women – not many, but they’re about. The NCO showing me around was of the opinion that the recent changes won’t increase their numbers.

I reckon he’s right – most women of my acquaintance have more sense than to opt for infantry.

There are computers everywhere, both functional and recreational. The base is mostly new, physically vast, and with the exception of the diggers accommodation, very impressive. There’s been a bit of controversy in the local rag about the dongas the single diggers inhabit. Frankly, they’re a bloody sight better than what I remember from forty years ago. All accommodation is air-conditioned.

7RAR is mechanised, and I was shown an APC which looked very familiar. They’re an upgraded version of the M113 we used in SVN. Apparently they didn’t use them in Afghanistan, opting for the safer Bushmaster. The weapons are different. A platoon now has four guns (FN Minimi built by Thales in Australia under licence). They still look a bit like an M60.

The mortars have gone high-tech. They use a kind of palm pilot, although I’m not sure exactly what the function is. Strangely, they resemble palm pilots used by teachers to record data for kids with disabilities. I was impressed by the people I met. They all reflect great pride in their unit – well deserved from what I saw. They’re struggling to set up a unit museum. There’s not a lot of time for this in a busy unit. 7RAR has forty years more history than it did when I was a member. Back then it was only five years old.

I was unable to hook up with any ex 7RAR blokes I knew, although I talked to a few on the phone. They all live in the boondocks. One ex 5 Platoon bloke is in Port Lincoln – an eight hour drive.


The book promo went well – a breakfast radio interview should help. In Adelaide it’s on sale in Dymocks in the city and Glenelg.

Blot in the Meida 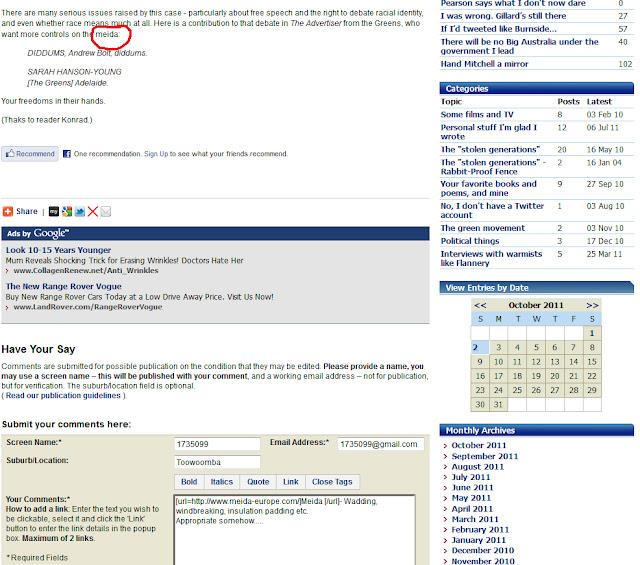 They'd have to be very effective to limit the wind that emanates from that quarter.

Click on the screen shot. I think I'll have to introduce a new post label. What do you think it should be called? Blot's Bloopers has a ring to it.... 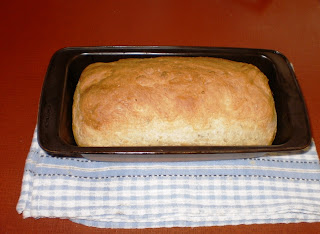 It's a pity you can't smell this.

Baking bread (like slow cooking) is excellent aroma therapy. Even if you don't believe in the benefits of pleasant smells (and I don't) walking into a home where bread is baking is always a treat for the senses.

Anyway, I've taken to baking one of these daily. Apart from the baking aroma, it also tastes good, and the people around our place who snack find the fresh loaf attractive.

They must, because it's usually gone by mid afternoon. Because I'm away from home working every second week during term time, it's a fortnightly phenomenon.

The recipe (which turns out crusty loaves with the characteristics of french baguettes) is very simple - twice as much strong baker's flour as warm water, a teaspoonful  of salt, and a tablespoon of yeast. Nothing else - KISS principle. You need to turn the oven up to its maximum and put a container of water inside.

I have a bread maker, but use it only for kneading and proofing. Once those processes are through, the mixture goes into a fan forced oven for thirty minutes.
at October 02, 2011 2 comments: