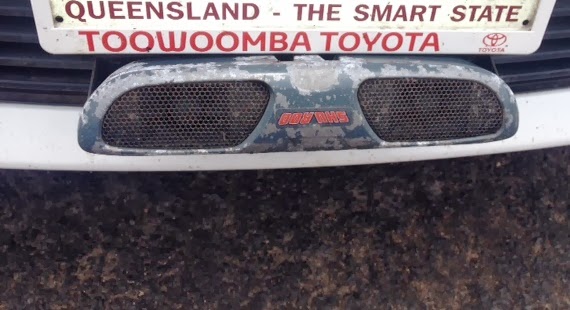 Because I'm back on the road, I thought I might take a look at the Shuroo.

There's a couple of reasons for this.

One is the prevalence of macropods of all shapes, sizes and colours on the road because of the drought, and the fact that she who must be obeyed (the fleet manager) allocated me a vehicle with a Shuroo fitted.

On close examination, after noting that the car (a late model Camry) actually had one, I also noted that it was mounted upside down. I have no idea whether that makes any difference. I don't think sound transmissions are effected by orientation.

The other thing I noticed was the sandblasted appearance of this thing. Apparently it has been fitted to three different vehicles over time, so somebody thinks it works.

A quick Google turned up an article which pretty much debunks their effectiveness. Here's the abstract  from -


Auditory deterrents such as the Roo-Guard® sound emitters (Shu-Roo Australia Pty Ltd) have been used to keep kangaroos off crops and airstrips. We tested the efficacy of the Roo-Guard® Mk II sound emitter in deterring tammar wallabies (Macropus eugenii) from a known source of food on Garden Island, Western Australia, where up to 400 tammars are killed yearly by vehicles. The device was not effective in deterring the tammars from the food even when an alternative source of food was available. It was concluded that the Roo-Guards in their present form are not suitable to keep tammars off the roads of Garden Island.

That sounds pretty cut and dried, but when you read how the research was carried out, it muddies the waters, as the things were tested in situ (stationary) - not on moving vehicles.

You would have to assume that conclusions from the stationary tests apply to the device when it is moving, and I'm not sure that is a valid assumption.

Anyway, anecdotally, no vehicle fitted with a Shuroo in our fleet has hit a roo or wallaby. I average one hit every three years, and I reckon I know where they congregate, and don't drive at dawn or dusk.

Also anecdotally, I have always fitted those cheap ($7) roo whistles to my private cars, and have never hit a roo although I do a fair bit of bush driving.

They don't repel taxis, but that's another story.