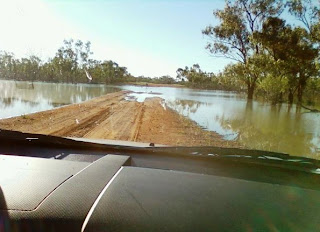 Last week I worked the westernmost loop of my area.
This takes me from Roma west to Quilpie, across to Thargomindah and back to base via Cunnamulla and St George. It's about a 1500km round trip, and in good conditions, a bit boring but straightforward.
This time it was neither straightforward nor boring.
The South-West has just been through a once in twenty year weather event that to me felt like a monsoon. Now I know it sounds bizarre to call weather in this part of the world monsoonal, but it reminded me of the wet season in Vietnam, characterised by daily rain lasting from the afternoon into the early hours of the morning.
Once the big flood rains stopped in the south west, this is what was happening, so any water lying about was being topped up daily.
Our team was using two light duty 4WDs (a Mitsubishi Outlander and a Nissan X-Trail) and for the first time in a long time the 4wd was necessary.
I assiduously checked the road advice from the various Shire councils and from the police daily, but unfortunately it was often contradictory. The on-line stuff isn't worth a cracker, always at least 24 hours out-of-date. We were told the Quilpie-Thargo road was open, so after a pretty strenuous day's work at Quilpie we set out late in the afternoon to travel the 195km across. The first 130km is good (if narrow) bitumen, the rest is a mixture of graded gravel and poor gravel with bulldust and corrugations. We had negotiated almost all of this, and were about 30km short of Thargo (with a plume of dust following) when we came across water across the road for about 100 metres.
Now I was brought up in the bush, and understand what can happen if you plunge into muddy water without knowing both depth and firmness of the road surface, so I removed the RMs and waded across. This may have revealed the nature of the track, but it did little for my soft feet.
There were a few soft patches, so I marked them with branches I broke of and planted upright in the mud. Then I explained to the driver of the Nissan (an enthusiastic newly graduated Occupational Therapist who grew up in the city) to make sure she dodged them to avoid getting bogged. I drove the Mitsubishi through in 4wd with the diff lock engaged with no dramas. The OT, on the other hand, went off the track a bit and got into the boggy stuff, and for a second or two it looked like she was stuck. She didn't lose her nerve, and managed to make the other side with me frantically gesturing to straighten the wheels as she was losing momentum through the amount of lock she was applying to the fronts to steer away from the edges.
We continued, but about a kilometer up the road there was another submerged stretch about the same depth, but a bit longer than the first one. The OT asked if I could drive her car through this time as she was still a bit shaken after the first one, so I ended up taking both vehicles across. Thiis necessitated wading the second hole twice. I haven't yet worked out how to drive two vehicles at once.
Comparisons were inevitable, and I discovered that the Nissan is also a very capable machine in 4WD so long as you keep your foot down and take advantage of the diesel torque.
We arrived in Thargo late, muddied and forlorn. The cars looked like they had been on a Paris-Dakar run, covered in both dust and mud. When we got home on Friday night it took an hour and much loose change in the DIY carwash to get the Outlander back to a state which wouldn't arouse the ire of the fleet manager.
The OT has had an excellent bush adventure and learned a bit about bush driving. She did well.
And I've got bloody sore feet.
at April 01, 2010 No comments:

This time last week my youngest daughter was the victim of a sexual assault. It was a Tuesday night at about 10pm.
It's taken me a week to get myself into a frame of mind that makes blogging about it possible. To make it worse, I was working 900kms west when it happened. She spent last weekend home and seems OK. I thought I knew her well, but she's surprised me by her toughness and pragmatism.
In one sense, she was lucky (and smart) to escape with little more than a manhandling, but she was briefly in fear of her life.
The offender chose an isolated corner of the railway station, and for a few long minutes and try as she might she couldn't get away from him. She is petite and this guy was big. Fortunately, the training she had at school kicked in, and when her train arrived she broke away, and went straight for people and light. He followed her into the train, and then she was petrified that he'd follow her off the train at its destination. She told one of the other passengers, a guy she didn't know, but who daily caught the same train, and he was generous enough to stay with her until she got from the station to her unit. The offender disappeared.
She then called the police and they came around pretty quickly.
They have a description, and he would have been seen on video surveillance, but as I write this, the police haven't found him. So he's still out there. It looks as if he was stalking her for a while, as he waited until she was away from other people to make his move. She works shifts in a coffee shop and always catches the same train to get home.
So now she is reviewing her security, and organising for friends to accompany her whenever possible at night. I'm looking for some kind of duress alarm.
What makes me angry beyond measure is that her confidence and self-assurance has been put in jeopardy by this creep. One good sign is that she seems angry and indignant rather than frightened. I share that anger, and so do her two big brothers.
It's to be hoped for his sake that we don't encounter him somewhere. Brisbane is a small town.

Update 09.04.10 -
Police phoned my daughter yesterday and told her they will be charging a bloke today. Let's hope he can't raise bail - he needs to be off the street.