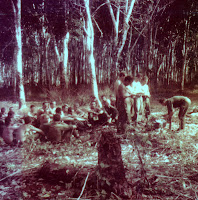 For only the second time in my sixty-one years, I'm embarrassed to call myself a Catholic.

The first time followed an incident in March 1970 in Fire Support Base Anne in Phuoc Tuy province in South Vietnam.

The second time is in the context of the dismissal of Fr Peter Kennedy from St Mary's Parish in South Brisbane.

Back in 1970, my platoon took a break from patrolling to rest up for a day or two in the fire support base, about halfway through operation Concrete 1.

The catholic padre (Keith Teefey – a great priest) was there, and let it be known that he would conduct a service – ecumenical of course – in which he would distribute communion. He also said that everyone – irrespective of denomination – was welcome to receive this communion, providing they did so respectfully.

There was an almost 100% roll-up at the mass, and many of my non-catholic mates took up his offer. In fact, I remember vividly the uncommon reverence most of them showed. This made perfect sense in the context of the situation. We were, after all, patrolling in a war zone, with the clear understanding that we were, to use the cliché, "in harm's way".

I was so impressed with this, that I penned a letter to my parents, describing in glowing terms what I'd seen. My dad, who was very much inspired by Vatican 2, told the parish priest in conversation next Sunday at mass in my home town, Texas. (Qld – not USA).

This priest, a conservative old Irishman, reported the conversation to the Bishop of the Diocese, after admonishing my father because he (my dad) was of the same supportive opinion as I was. Two things followed – the bishop had the good sense to ignore the complaint, and my father was shunned by the priest for the rest of his time in the parish.

Given that my dad was the principal of the local state school, and my two younger brothers attended the convent school, this created a very awkward situation in the small town.

I was amazed to hear the full story when I returned home. It surprised me to discover the level of bigotry and ignorance that lingered from the pre-Vatican 2 era.

Well, I'm surprised once more. For the life of me, I can't see what's "Catholic" about Archbishop Bathersby's action. The word "Catholic" means – " broad or wide-ranging in tastes, interests; having sympathies with all; broad-minded; liberal."

Somebody should explain this to Bathersby, or buy him a dictionary.

I was also gobsmacked to see Bathersby interviewed on TV describing the church as "Roman Catholic". No Catholic uses this term.

I hope this doesn't signify a hardening of the church's attitude towards liberation theology. Pope Benedict XVI has long been known as an opponent and has issued several condemnations when he was head of the Congregation for the Doctrine of the Faith. The Church's work with disadvantaged communities is one of the major factors that has kept it relevant in a rapidly-changing world.

Perhaps archbishops don't get out much.
I don't hold out hope for the future of the institutional church if this is indeed the case. The community of faith may be all that remains.

Yesterday we joined a convoy of Mazda MX5s on a run out to Jimbour station. It was a great day, combining the enjoyment of driving the MX5, exploring the fascinating heritage listed site, a great lunch, and some good company.
It was overcast, which made the driving very pleasant, as "top down" is de rigueur for these runs – only a wimp would drive under a roof, even if it is made of vinyl. 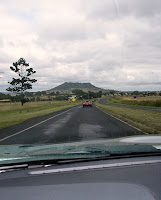 Jimbour House was built in 1877 for a cost of $30000 from materials sourced locally. The timber came from the Bunya Mountains, and the slate and stone from a quarry less than 10k away.

It is an astonishing building, with a grandeur which seems strangely out of place in the rural environment. I could see it in a big city, or more fittingly somewhere in Europe, but it must have been the centre of a dignified and lavish lifestyle in its heyday.
Money and power in the colony at the time was carried on the sheep's back, and the families who worked this beautiful country were the movers and shakers of their day.

The house itself would have been a haven from the elements with walls over a foot thick, and it was heated and lit by gas generated from a nearby coal seam.
The whole setup was self-supporting, with a "kitchen garden", extensive stables, and later a sealed airstrip. The airstrip was in use yesterday when a party of sightseers flew in from Archerfield in a beautiful Mooney M20J.

There is a church on site, still in use, and featuring a projection box in the rear near a belfry. As far as I know, it's the only chapel in the country which doubles as a cinema.

The Russell family, who still work the property, were pioneers in the use of aircraft to defeat the tyranny of time and distance presented by poor roads and the Blacksoil country.
There is a large hangar on the property housing at least one aircraft – a Beech Baron, from what I could see through the crack in the locked roller doors. (When I say "roller doors", I mean heavy doors sliding sideways on rollers – just like in the movies – not your woosy domestic variety). Lunch was great, and being able to eat it in the deep shade of some large Jacarandas was very pleasant. They also make their own wines, and their 2003 Shiraz is excellent. Unfortunately, I was unable to partake because I was driving. I was forced to buy a bottle or two to take home to remember the day by.