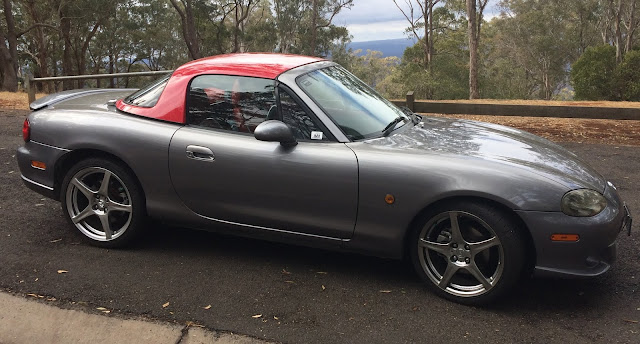 For years I've been intrigued by the various iterations of the Mazda MX5. Owning a couple of them has not resolved this fascination.

Back in the early part of this century, two turbocharged versions of the NB were produced.

The first (called SP) was a Mazda Australia project carried out under the supervision of Allan Horsley, but it was built by Prodrive in Melbourne, the company that builds FPV performance Fords in partnership with Ford.


The second (called SE) was an official Mazda factory version, called Mazdaspeed Miata in the US, and Roadster in Japan and other markets.

Both were relatively mild with low boost turbos, but the SP was a little more potent.


They were actually quite different cars. The SP is raw and comparatively rare, only 100 being produced. The SE is more thoroughly and conservatively engineered, but has up rated steering and suspension, which makes it a bit harsh around town, but a treat on the open road.


A couple of weeks ago I came across a 2004 SE advertised in . Coincidentally, I was planning a visit to an old army mate in , so combined that with an inspection of the SE.

The car was good, sporting a unique interior fitout. It pretty much sold itself.

I flew to from , and was met at the airport by the obliging owner. Incidentally, the last time I flew Brisbane-Newcastle was on my way to Nasho at Singleton in January 1969.


This trip had a much more enjoyable outcome.


I drove the SE to the same day, and drove Tamworth-Toowoomba the day after.


Whilst the boost is mild, it comes into its own overtaking on two lane roads. The Tamworth-Toowoomba stretch has plenty of stretches of great give and take roads.

So now I have two MX5s. Given that I haven’t mastered the art of driving them both at once, the original is on the market.