In a lively blog discussion the other day, Andrew Blot Bolt's name came up.

One of the posters (sadly - not I) described him as a "conflict entrepeneur".

To introduce a metaphor - Bolt (and others of his ilk) remind me of country shows when I was a kid …..of the spruiker who stood outside the boxing tent beating the drum.
Not much skill or intelligence required – just the capacity to maintain a steady relentless beat….

Anyway, without stretching the metaphor too far, it provides a context for some great music.

And whilst I'm talking about Bolt, below are a few examples of what your eyes are not allowed to see - examples of comment I've made on his blog which this exponent of free speech has censored.


It fascinates me that a conflict entrepreneur is afraid of a humble part time blogger.

Still, it provides a great excuse to post Paul Kelly.

The Doctors' dispute in Queensland is slowly coming to a head.

It's of interest in our family as I have a brother and a niece both medicos.

Lawrence Springborg has been going flat out to smear doctors refusing to sign contracts.

Hi friends. I am an Anaesthetic registrar at the Royal Brisbane & Women's hospital. Along with my colleagues I am trying to raise public awareness of the current dispute between the government and public SMO’s - we are now in a state of scary uncertainty regarding the future of Queensland’s public health system and I urge you to please take a few minutes to become better informed about what is happening.

Here are just a few facts regarding the statements the Newman government is saying:
Doctor’s earn $400 000 working 40 hours a week.
FACT: http://www.health.qld.gov.au/medical/docs/payrates_2012.pdf - this is what we get paid. We get paid allowances for overtime and fatigue (inadequate break between shifts) – this is to ensure patient safety so you don’t have tired doctors.
Doctors have rorted the state of $800 Million over the last 9 years
FACT: Queensland was forced to increase the pay of senior doctors after the Bundaberg/Patel scandal because the state could not attract properly qualified Australian doctors to the public hospitals. Why? Because Queensland paid 25% less than other states. Queensland increased the pay to catch up to the other states and it has worked, rebuilding the hospital system over the last decade.
The Auditor General reported doctors were double dipping in the public and private purse
FACT: The report stated 7 out of nearly 4000 may have, so 99.9% have not. Those who have should be held accountable. Those who have not are public doctors dedicated to your health, earning MUCH less than they could in the private sector.
Meanwhile, the other unpaid vital roles of senior doctors goes unnoticed.
• Teaching of Medical Students, Junior Doctors and other health professionals
• Assessing overseas trained doctors to maintain safety standards
• Research and Audit to ensure Queensland continues to provide world leading health care
This includes training ME. Without my consultants, I don’t have a training position. My registrar colleagues will not get trained – and there you’ve lost the next generation of specialists.
I completed a 3 year Ba. Medical science, 4 year Ba. Medicine/ Ba. Surgery - then completed 2 resident years, one year as an ICU Registrar at PAH and am now a 3rd year anaesthetic trainee and will not become fully qualified until I'm at least 33 years old. My position will no longer be accredited if I lose my supervisors. It takes 13+ years to become a consultant specialist - plus continued training throughout your career, not to mention further training to hone unique skills within a speciality. The thought that Newman / Springborg thinks our public specialists can be easily replaced is completely insulting.
The government now has an all-out smear campaign against doctors (with Courier Mail tightly wedged in its back pocket), taking out full page ads to slander SMO’s. Obviously we don’t have that luxury, so my aim is to raise awareness and present my views on the matter, backed by a few facts.
Just over 12 months ago, doctor representatives and the government agreed on the MOCA 3 – a detailed contract regarding conditions of medical officers until 2015. (http://www.qirc.qld.gov.au/resources/pdf/certified_agreements/cert_agreements/2012/ca546_2012.pdf) . Last year the government changed legislation to push through these individual contracts, which took away the right to industrial action and means for dispute resolution (including disputing unfair dismissal), and these contracts also can be changed at any time by hospital administration – they can alter hours and place of work – but worst, the politicians and administrators will dictate patient’s treatment options, NOT the doctors. Ever heard of the Staffordshire hospital enquiry? : http://www.telegraph.co.uk/health/healthnews/9851763/Mid-Staffordshire-Trust-inquiry-how-the-care-scandal-unfolded.html - read here what happens when bureaucrats, administrators and budgets drive healthcare, instead of its frontline medical staff. Closer to home – Dr. Jayant Patel – don’t be fooled thinking it was solely about a criminal surgeon looking to harm people with a scalpel – the government set bottom lines and unreasonable KPI targets and that’s how they got the Bundaberg disaster.
^^ THIS IS WHY OUR DOCTORS ARE REFUSING TO SIGN. It has nothing to do with paycuts or loopholes - it is the potential loss of a doctor's ability to protect and treat our public patients, which is you and your families, with the best care possible.
These SMO's have your back - please, if you agree with this post, show your support and consider signing this petition :
https://secure.avaaz.org/en/petition/Queensland_Premier_Cambell_Newman_and_Health_Minister_Lawerence_Springborg_Come_back_to_the_table_and_negotiate_properly/?dfEaihb&pv=9

Update - Some concessions from the government, but the prognosis isn't good.
at March 28, 2014 No comments: 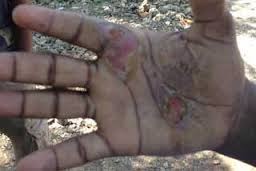 Unpalatable as it may be, if you go back far enough into the history of the ADF, there is precedent for abuse of prisoners.

I’m sure the majority of service personnel behave themselves in very difficult circumstances as they did when I was a member forty years ago, but to assume that nobody ever stuffs up is, put simply, the height of naivety.

After all, the ADF is made up of the full cross section of humanity, and there will always be a small presence of psychopaths and bigots in any group.

This incident has an eerie similarity to allegations made by asylum seekers recently.

There are always a few cowboys in any unit. The quality of the ADF these days isn’t leavened by conscripts (whose presence improved the average IQ of the army significantly) so it’s entirely possible that one or two personnel lost the plot, particularly if they were members of *TSE aboard the Parramatta.

1. A number of asylum seekers had burns on their hands after their boat was intercepted by Australian military personnel.
2. Australian authorities refuse to release any details of incidents on that boat, claiming operational security.
3. Pepper spray was used in this incident (confirmed by Scott Morrison).

1. How were these people burned? Are we expected to believe that the burns were accidental or self inflicted?
2. Why are details of the incident denied to the Australian public? Is there something to hide?
3. What other restraint was used? What training did the special squad have in the use of forcible restraint?

The media has a responsibility to report – the military to investigate. It is claimed that an investigation has taken place. If this is the case, and there is nothing to hide, why haven’t the results been released?

Why is the ABC being so trenchantly condemned? Is that a very effective and contrived smokescreen?
There is a very nasty stench about the incident. The truth will come out, even if it takes as long as it did for the truth of the water torture incident linked above.

*TSE – Transit Security Element – Drawn from Army, Navy and Air Force. You’d have to wonder what kind of macho adolescent would be attracted to a unit that routinely manhandles desperate and unarmed men women and children.
at March 27, 2014 No comments:

Ilyushin Il76 Using it All

Ilyushin Il76s are in the news a bit at the moment.

With that in mind, I thought I'd post this, taken by plane watcher Martial Voitier at Canberra airport.
The dry commentary is great, although it's a bit colourful.


How refreshing it is to drink from the cup of sanity most Sundays.

I'm not referring to the communion wine, but to a dialogue about asylum seekers not driven by fear and hate.

Take a look at the relevant page from today's parish newsletter.

The top segment refers to an appeal launched a few week's ago to help a number of recently arrived asylum seekers - arrived in Toowoomba, that is. The result was a flood of offers of time and kind. This is a generous community.

There is also a march and picnic on Palm Sunday organized by TRAMS (Toowoomba Refugee and Migrant Support) from the cathedral to the gardens.

There are weekly Friday prayers and reflections at the Social Justice Commission as part of the National Lament for Asylum Seekers.

A petition was circulating at mass today requesting the federal government to end inhumane treatment of asylum seekers. As far as I could see, the whole congregation signed it.

The image above (which appeared on the parish newsletter) provides pictorial evidence of the significance of boat arrivals in the Australian context. It is clear that we don't have a "problem" that warrants the hysteria promoted in the mainstream media. Recent publicity about the extent of passport forgery as used by unauthorized arrivals by air, also puts the issue in clearer perspective.

Sunday mass has become an oasis of sanity in a desert of hysteria.