Today the local media excels itself in the statement of the bleeding obvious.

Tanya Chilcott displays a blissful ignorance of human psychology in the opening statement of her vacuous piece about the tabling of information already available on the website of every Queensland school.

She points out that -

NOT one Brisbane school had all students above the national benchmark for every category in state-based numeracy and literacy tests for 2007.

The capital letters are hers.

Now when I studied child development at Kedron Park Teachers’ College in 1966, I learned about the curve of normal distribution. Unless basic human psychology has changed radically in the last fifty years, this curve still holds.

Put simply, the graph of distribution of Intelligence Quotient shows that there are very many average people, few very dull people, and few very bright people. The inverted U-shaped curve is the graphical representation of this mathematical truth. This is quite clearly reflected in the data distribution as displayed in the comparative tables in the Courier. It shows that in every Brisbane school, there are some students who fall on the left side of the continuum.

This simple phenomenon of human performance is obviously lost on Tanya. I doubt that it is lost on her readers, who for years have managed to make school choices without the assistance of the Courier Mail.

Without delving too deeply into these out-of-date statistics (they’re 2007 figures), it is clear that what they do show is the strong correlation between Socio-economic status and school performance.

If the Courier devoted more column space to the pressure applied to teachers by the politically-driven testing regime (NAPLAN) distracting them away from the business of teaching and helping kids to learn, they would indeed be providing a public service.

Not on the Test

Today Queensland teachers go on strike for the first time in more than ten years.

I remember the last one. I was a Principal at the time, and a member of the Queensland Teachers’ Union. After retirement, I’m no longer a principal, but am still a teacher and have maintained my union membership.

I don’t always agree with the QTU, but support this action. It has been taken as the result of a secret ballot, so the rank and file are behind it. It’s probably not going to be effective, as the money simply isn’t in the state treasury, but teachers in this state are being shafted.

I’m pretty sure that if you polled teachers in Queensland, they wouldn’t rate salaries as their major concern. They’d talk about the politicisation of education, the lack of support from parents and community, and the onslaught of the plaintiff lawyers. This trinity of factors has made the profession so much less attractive than it used to be.

The retention figures bear this out. We’re losing teachers (especially young ones) at a rapid rate. Industrial action gets the issue into the public eye, but that’s about it. If the Union and the government got together and started talking about the quality of the lives of teachers and the necessity to support them to do what they do best, more would be accomplished in terms of getting the best results for kids.

Improvements in training, resourcing, and critically, the mentoring of beginning teachers would make a difference. There also needs to be some serious tackling of the lack of gender balance in the profession. There is a role for affirmative action to improve both the quantity and quality of male teachers. Like it or not, there’s a strong link between the misbehaviour of young males in schools and the dearth of male teachers.

The introduction of standardised testing is not the answer. In fact it is one of the main factors increasing malaise in the profession. NAPLAN* (or Napalm as most teachers call it), has had the effect of creating lots of hype, bureaucracy and stress. Teachers are “teaching to the test” (surprise/surprise). No doubt the next set of results will show an improvement, simply because the kids are learning how to complete the test – but that’s all that will improve.

Little or nothing will change in terms of improving the literacy and numeracy of individuals. It will, however, keep the pollies (and some sections of the manic media) happy.

One of the aspects of the principalship that I don’t miss is the management of industrial action itself. Principals are usually monstered by the regional and district administration to keep the schools open and report on the number of teachers striking.

These same principals are members of the union, so are also bound through basic ethics to support the action of their teachers if the strike is supported by the majority. My action during the last strike was to refuse to cooperate with providing information of teacher intention to the District Director. I asked my teachers to send individual emails to District Office advising them of their intention. They all did so.

I turned up on the day itself, but donated the day’s pay to a charity, and wore a sticker staying “I am on strike”. It was necessary to be at the school physically in the interests of keeping everyone safe and helping parents who were in a jam. It didn’t make me popular with the District Director, but was the only way I could maintain personal and professional integrity.

Integrity and professionalism are slowly being squeezed out of teaching by our governments (both federal and state) following the worst aspects of the American system.

Hence the American video. (Just click the word "video" - thanks to my music teacher sister). 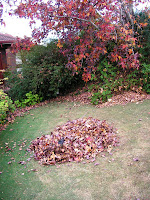 They’re aromatic, and smell good when dry and put into our wood fire, but you need to dry them well or lots of white smoke results and we don’t get a new Pope, no matter how much I wish we did.
at May 19, 2009 1 comment: