Last weekend the Mazda mob (of which we are now members) took a drive to Maclagan.

I'm sure, gentle reader, you know where Maclagan is, but in case you don't, take a look at the map (Click on it to get a decent sized pic). It's generally on the way to the Bunya Mountains, off the New England.

This is a very picturesque part of the Downs, and looks a lot better these days than it did when I used to work in nearby Bell. Back then (three years ago) the country was so dry that the trees were grey.

We've had plenty of rain since then, and the cattle are fat, the creeks brimming, and the grass green. 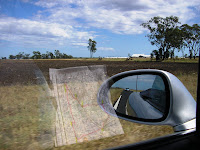 The goats look OK too.

Now being a far western bushie – goats to me are scrubby looking creatures on the scrawny side of hungry. This is not the case with the Rangemore goats. They're plump and generally Omo white. The contrast is the same as 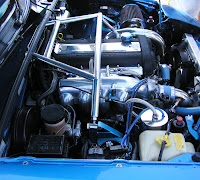 that between Kiwi and Aussie sheep.

I'd never eaten goat before – but the curried goat pie I had for lunch was delicious. It tasted like well-cooked lamb.

The driving was excellent, the company good, and the wines OK. Unfortunately, driving and wine-tasting are mutually exclusive, so I had to rely on my wife's verdict. 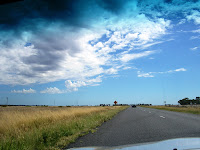 She was right about the Rose. 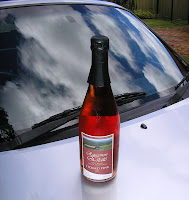 This is the first week since the beginning of the school term that I haven't worked out west. It's good to have uninterrupted quiet time.

What I've noticed about aging is that I still do all the things I've always done – it just takes longer to physically recover. This seems to hold true for the long-distance driving the work requires. These days I drive say 600kms in a day, and spend the next day or two recovering.

Combining the driving with the full-on work in the schools is challenging.

There's always a lot to do in term one. Every time a student with physical impairments enrolls at a bush school, there are heaps of issues to confront.

The problem of basic physical access is always present in bush schools. They're invariably (in Queensland) built on stumps, and the toilets are often inaccessible. Developing ways of ensuring access (as is the legal requirement) requires a great deal of lateral thinking in many cases.

I drive around Toowoomba when I'm home and look at the multi-million dollar infrastructure which comprises many of the wealthy private schools (Grammar, and my old alma mater – Downlands are two prime examples) and wonder about the ethics of governments that continue to throw money their way, whilst at the same time being stingy with dollars to provide basic physical access in state schools in the bush.

This is thrown into stark relief when you understand that these same wealthy schools refuse to enroll students with autism or intellectual impairments because they "don't cater for them".

No such choice operates in the bush.

Another interesting phenomenon involves the increasing incidence of students with severe and multiple impairments. It probably relates to the improvements in post natal care for these kids who now survive, whereas ten or fifteen years ago they didn't.

I continue to be inspired by the parents and teachers of these kids who go to extraordinary lengths to develop high quality programs around them. Supporting them keeps me motivated and enjoying the work.

It will be interesting to see whether I still have a contract if the LNP get in, as it appears they will. We will see their true colours in relation to support for bush kids.

The fascinating issue will be whether the LNP's traditional (and generally mythical) alignment to bush voters will be outweighed by their commitment to reduce government spending.

So this is how it works - (Today's Australian)


Alcopop firms behind $70k given to Libs

The liquor industry peak body that vocally opposed the Government's rejected alcopops tax donated almost $70,000 to the Liberal Party in 2007-08.

Information provided to the Australian Electoral Commission shows the Distilled Spirits Industry Council of Australia gave $69,670 to the Liberals in 2007-08, with $42,400 going to the federal Liberal Party and the rest being split among state branches, including a $20,000 donation to the Victorian division.

The Relevance of Language 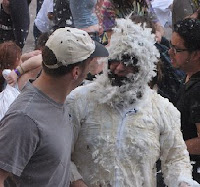 My father had a colourful turn of phrase. He was brought up in a time when the importance of conversation and the power of the spoken word were paramount. He was also a great English and History teacher and understood how the use of the spoken word has changed our history.

The world has changed a bit since dad's time.

Now image is everything – both literally and metaphorically. The swamping of the media by both the still and moving image has changed the way we look at the world.

The power of the picture has been brought home to us well and truly. Remember the napalm girl, the man standing before the tanks in China, and the destruction of Saddam's statue.

Each of these images has in its own way, changed how we saw the events surrounding the situation they grew to symbolize.

Something has been lost in this fairly rapid transition. Perhaps this loss of direct and colourful language is part of the reason for many of our current ills. There are many issues that images cannot communicate.

The phenomenon of CEOs and the like taking obscene bonuses is one of these situations.

When I was in the army, we had a word for those who personified selfishness. This word was "jackman".

A jackman was a person who operated on the simple and ruthless understanding that "I'm all right, Jack".

The corollary of this, of course, is that everyone else can go to buggery. A jackman was not a very popular individual in an infantry platoon, where interdependence was critical, to the point where your life occasionally depended on it.

Terms such as "mug lair" could be revived and applied to any number of professional footballers, and the word "spiv" recalled and put to good use when discussing the financial and real estate industries.

It strikes me as passing strange that the conservative bloggers are silent on this issue, despite their cries of rage on any issue of perceived waste of public money. It's obviously OK if this money goes to the worthies who have pursued the accumulation of money above all else. They have introduced a novel concept – that of the deserving rich – as opposed to the undeserving poor.

In the meantime, I'd like to invite any of these deserving (ex) Masters of the Universe to debate the issue in a public forum.

It won't happen of course; they'd be afraid of being tarred and feathered.