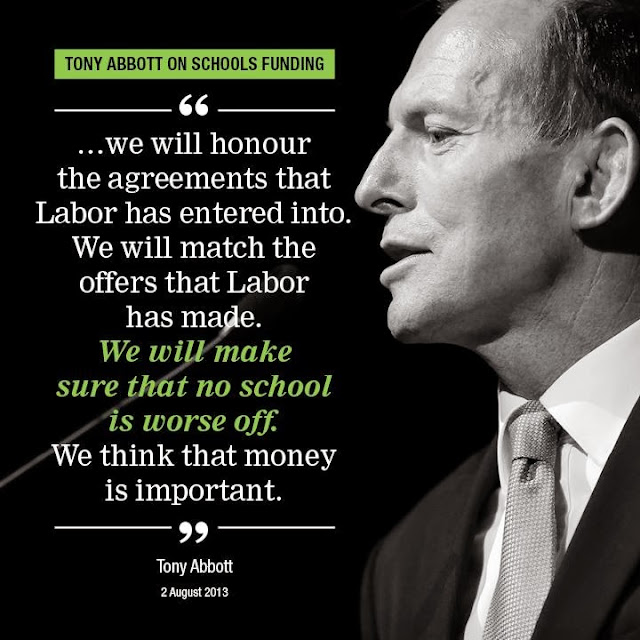 Because I'm a teacher (have been one now for forty-five years) - I felt heartened by the Coalition's promise before the election, that they would implement the Gonski recommendations.

There is so much in the Gonski concept which is of significant value to the target group of kids that I work with, namely students with disabilities in remote and rural settings.

Now, after yesterday's events, I regard the whole thing as being in jeopardy.

That's my problem, I guess, because I have skin in the game.

But the broken promise is probably a more fundamental issue. From here, it's glaringly obvious that nothing that the current government promises can be believed, and they have taken power on a scam.

Sure, the Gillard government broke a promise on the Carbon tax, but when the promise was made, there was no awareness that there was going to be a minority government.

No such excuse is available now.

Perhaps it's simply a feature of contemporary conservative governments.

Remember Newman's statement in Queensland - "Public servants have nothing to fear from an LNP government."

Update - The coalition have performed a double back somersault with pike which in the final analysis, is not the same scheme as promised by Labor, and leaves them plenty of wriggle room.