The One Day of the Year 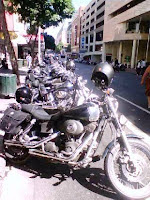 I dragged myself out of a warm bed this morning, and drove the 150km to Brisbane to march with my old unit association. There’s no-one else in this town from 7RAR, so if I want any form of reunion, this is necessary.

I’m glad I did. Apart from running into old mates and sparring partners, I met “Leafy” who was repatriated to Australia fairly early in our tour with Scrub Typhus. I hadn’t seen him for 38 years, but recognition was instant.

We marched, had a few beers, talked about old times, and enjoyed the atmosphere, which was like nothing I’ve seen before. I remember a sea of faces, people shouting “thank you!”, and an amazing mix of garb, ages and races.

The only difficulty was when I arrived in the city without any idea of where the march was forming up. I asked directions of a couple dressed in merchant navy blazers. They were Scots – with brogues so thick that I couldn’t understand a word. A young Asian woman was just as helpful, but her “Engrish” was more comprehensible.

One arresting sight was the row of motorcycles in front of the Irish Club. It was a bit like Saigon on steroids- the bikes were as prolific, but on a different scale.
at April 25, 2008 No comments: