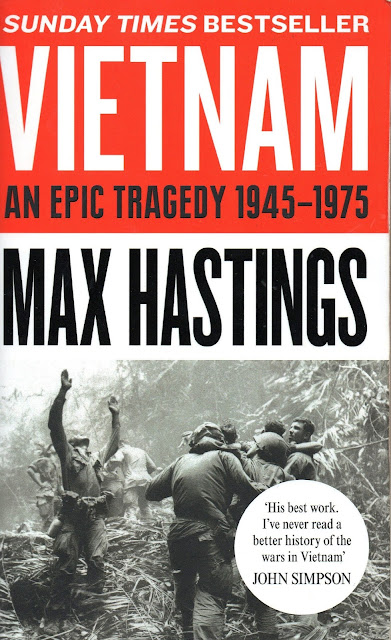 I haven’t covered a book review for some time, gentle reader, so will fix that right now.


It was a Christmas gift from one of my sons, who knows I’ve read just about everything published on the conflict, but successfully found something I hadn’t.


Most works on the war in Vietnam can be classified into one of three groupings – dry military histories, exploitative narratives, or political tomes. This book is none of these. It resembles a journey through events, incidents and personalities, and engages the reader through its use of vivid detail, unique perspective, and thoroughly researched context.


Hastings is aided by the fact that he is about the same age as I am, which means he lived through the events. I think this helps, as they were indeed exceptional times.


The author (an Englishman), has worked as a foreign correspondent for the BBC, editor-in-chief of The Daily Telegraph, and editor of the Evening Standard. He is also the author of numerous other works, chiefly on defence matters, which have won several major awards. He was knighted in 2002.


His approach is to present a series of narratives centred around specific episodes or incidents, starting with the siege of Dien Bien Phu in 1952 and ending with the fall of Saigon in 1975. His attention to detail is spectacular, and the contextualisation it provides brings the work to life. He has obviously researched the topic comprehensively, but the wonderful detail never slows the impact of the narrative.


If there is an underlying theme to this tragedy (and his summary of the title is apt) it is the contrast between the consistent cynicism of the great powers (the USA, the Soviets and the Chinese) and the consistent faith of the North Vietnamese Communists. The great powers never gave up using Vietnam as a plaything; the North Vietnamese never gave up seeking to unify the country under Communism.

In the end, faith trumped cynicism - but at a terrible cost.

The Americans saw the conduct of the war (once they had blundered into it) only in the setting of domestic politics, specifically the way in which it would affect Presidential elections. The Soviets and Chinese saw it as an opportunity to influence and manipulate the outcome of the cold war.
Neither the Americans nor the Communist bloc seemed to have any care or understanding of those directly involved – the combatants and the Vietnamese people. They were always collateral.


Hastings seems to divide the Vietnamese into two groups – those who supported the NVA, and those who simply wanted peace and survival. There was never, according to Hastings, a sufficient critical mass of Vietnamese in the south with anti-Communist sentiment strong enough to persevere. There were a few, but often they were sidelined by the Americans, a notable example being Ngo Din Diem, assassinated in 1963 with CIA approval partly because they were worried that he was showing signs of being beyond their control. The South Vietnamese had a dog in the fight, but the Americans wanted to keep it on the leash.
The NVA, inspired initially by Ho Chi Minh, and after his death by Vo Nguyen Giap, probably one of the twentieth century’s greatest military strategists, never gave up. When asked how long the North was prepared to fight, Giap is quoted as saying -  ''Another twenty years, even a hundred years, as long as it takes to win, regardless of cost." He meant it.


This war was a war of images. You will recall the images of the naked Vietnamese girl fleeing a napalm strike, the footage of a Viet Cong being shot by a South Vietnamese commander during Tet in Saigon, and many images of the siege of Hue. In my experience, the best metaphor contained in an image is presented below, a Zippo lighter that could be bought for a few greenbacks at roadside stalls all over Phuoc Tuy when I was there in 1970. 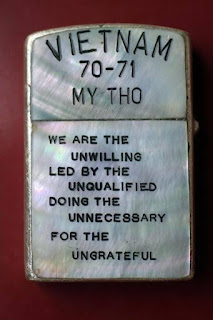 These things sold well because the inscription tells a symbolic truth as experienced by the GIs and the diggers, and on another level by the Vietnamese people, except that the references to the “unnecessary” and the “ungrateful” have a deeper meaning. The great powers obviously believed that the conflict was necessary. The political leaders were certainly ungrateful in terms of their attitude to their returning soldiers.


The other little piece of symbolism refers to the Zippo lighter itself. Here was a saleable object that provided street vendors with an income. Many pragmatic Southerners used any opportunity to make a living from the war. First they had to survive; then they had to make a living. 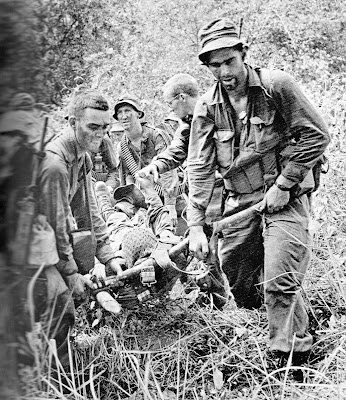 The book has a great collection of images, and one illustrated above resonates with me. The shot is in the AWM collection, and depicts an incident involving my rifle section in March 1970. The digger being carried to a dustoff clearing is Gil Green, who had collapsed and become very ill after he reacted badly to camouflage cream we used. Strangely, the shortest man in the section (Bernie Cox - left) is paired with the tallest (Russ Hollings - right) at the front of the litter. I remember the desperation and confusion, and this physical mismatch depicts it clearly - a great shot. I think the bush hat to the left of Bernie Cox is mine, by the way, but the rest of me is hidden by Bernie's pack - probably a good thing.

This juxtaposition of the suffering and privations of those directly involved in the conflict, and the cynicism of those directing it, is clear in Hasting's book. The same juxtaposition is a feature of Spielberg's The Post. The movie begins with footage of a VC ambush, and then switches immediately to Robert McNamara being interviewed after he had been briefed by a victim of the ambush. The reality of the war on the ground was well understood by McNamara, but he was unprepared to admit it. His eye was on the next presidential poll. Given the poetic licence used in the movie (it was actually the New York Times which first exposed the Watergate scandal), the point is valid.

Soldiers and civilians are collateral when politics is involved. Let's face it, the same applied in this country. Menzies commitment of Australian troops in Vietnam was political pragmatism. He needed to keep the DLP on side, to ensure their preferences. Fighting in a war against Communists, even if it was in peacetime on foreign soil, kept them on the leash.

It took until 1972 and cost 520 Australian casualties (200 of them conscripts) before it was over. Forty Vietnamese died for every American, and 4500 for every Australian. That is the real tragedy.

I can thoroughly recommend it, even if you're not, like me, a history tragic.