There is an interesting confluence of stories in today's Courier Mail, which on first glance don't seem to be connected.
On page 9, there's an account of John Mulcahy's departure as CEO of Suncorp. On page 10, an article about self-funded retirees appears. This second one, about government's abandonment of this group in the face of the current financial train wreck, isn't on their website, and I can't link to it, but this earlier story is relevant.

They're linked in my mind.

About six years ago whilst still in harness as a school principal, I was seconded for six months to work in a senior Human Resources position. Our District Director at the time was trying to get field personnel into her office in an attempt at culture change.

One of the less pleasant aspects of this otherwise fascinating job was the responsibility of recommending to the District Director, action to be taken with non-performing teachers. Every now and again, I had to recommend termination (after the completion of a process called Diminished Work Performance) to the DD. Sometimes, it fell to me to break the bad news to the teacher in question. It was really the principal's responsibility, but on occasion it was easier on all concerned, if someone disconnected with the school did this. Once, a teacher for whom I had recommended termination got hold of my home phone number and made life a bit difficult for myself and family for a while. Being phoned at weird hours to be asked "How can you sleep?" wasn't fun. My attempt at wit - "I was doing OK on the sleep issue until the phone rang" went over like a lead balloon.

This made be very familiar with both the consequences and fallout of under performance. The main victims, of course were the kids in these teachers' classses.

Compare this situation with the fate of Mulcahy, CEO of Suncorp, after the value of the company has fallen $12 billion from its peak of $19 billion. According too this report, he's left of his own accord, and has taken with him $20 million pocketed during a six year period. He also holds 1.3 million shares, worth $9.26 million on current share values, and has another 400000 incentive shares worth $2.8 million. His payout figure is $2.4 million.

Why is under-performance tolerated rewarded in this fashion in private industry? It's interesting to compare this situation to my experience. The cliché that does the rounds in Tory blogs is that the public service doesn't act to manage under-performance. I don't see anyone complaining about merchant bankers in a similar situation on blogs such as Bolt's or Blair's. How is this connected to the story on self-funded retirees?

Obviously, we (I'm one of them) are taking a beating in the current situation. I'm better off than most asset-wise, but it's not fun watching the accumulated rewards of forty-five years of work diminish rapidly (I left school at fifteen and started contributing to super in 1962). It effects my capacity to help my kids, as I'm not prepared to access any of my accounts, and won't until things start to turn. How long this will take is anyone's guess - we're in uncharted territory. I hope I'm still compos mentis enough to enjoy what's left. The job I do because I enjoy it has become useful about now.

It makes my blood boil to understand that smart-arse bankers are handsomely rewarded for making such a mess of their work in providing security for their investors and employees, whilst self-funded retirees are denied the same security through no fault of their own.

But it must be OK – the market rules, after all. 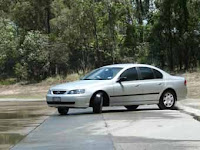 You can't teach an old dog new tricks - or so the cliche goes. Actually you can.

I learned some new tricks today at a driver training program. As I drive about 15000km per year for work, most of it at high speed on indifferent rural roads, I thought that it might be a good idea to update my skills knowledge and attitude, as there is a degree of physical risk involved.

So far the worst that's happened on the job are a number of encounters with wildlife. The hairiest encounter was with a wallaby that I hit dead centre at 100kph between Cunnamulla and Charleville, so in four years I've probably been a bit lucky. (The wallaby didn't survive - the car did - it had a roo bar which was moved sideways about 10cm).

The training started with a theory session which lasted about two hours. This covered situational awareness, vehicle preparation, driver attitude, commentary driving, positioning (the driver in the vehicle and the vehicle on the road), visual scanning, and dealing with emergencies. This was delivered in a manner which I found strangely familiar. Turned out the instructor was ex-army (Cavalry) and his well-organised no-nonsense delivery reflected that.

We then headed out of town, two students and one instructor per car, to participate in a two-hour practical session. This was very valuable. Initially the instructor sat beside the student driver and picked the eyes out of your driving habits. I got my licence in 1964, so have had plenty of time to develop some bad habits. One of them was to drive to close to the vehicle in front in suburban traffic (they stipulate one car length per 10kph which is very conservative). The gap you leave is invariably filled quickly, but you live with that.

On a gravel surface we practised panic braking which demonstrated the effectiveness of the ABR system. I've owned five vehicles with this feature over the years, and have never had to use it in anger, but it was great to understand how it helps in an emergency. Modern vehicles (this was a Commodore Omega) are very safe given ABR and electronic stability systems, although the instructor disabled the ESP for the purposes of the braking exercise.

It was interesting that the techniques about visual scanning that I was taught forty years ago in Infantry Corps training were repeated today.

The only downside to the exercise was being thrown around like a sack of spuds in the back seat of the Commodore whilst the other student went through his training. Carsickness was a real possibility.

By the way, the advice if you encounter hopping creatures is to brake, but not to swerve. If a collision is inevitable, you're advised to get off the brake at the last moment, so that the nose of the car rises making a roo through the windscreen less likely.

I'm not sure that this technique would spring to mind in the middle of a phenomenal avoidance. I hope I don't find out the hard way.
at February 02, 2009 1 comment: