Because I've been traveling again in the course of my work, I've had time to read. This might sound a bit Irish - but evenings in a motel in the bush allow time - given the quality of what's on television.
I've just finished "Vietnam - The Australian War" by Paul Ham, released about a week ago. I couldn't put it down, and it's inspired me to write a brief review. - so here goes -
Few authors on the subject are as comprehensive in their research. One of Ham’s strengths is that he interviewed an enormous range of people from all aspects of the conflict. He publishes their comments providing a brief context, and generally lets the reader draw his or her own conclusions.
He is even-handed, in the sense that he shows no unwarranted respect for any traditional sacred cows. What seems to outrage him above all else is hypocrisy. He shows no mercy to many of the American commanders, and some of the Australian brass. He shows great respect and compassion for the fighting soldiers.
He provides interesting contextual positioning. Ham takes the time to present an historical context. This is often neglected by other writers on the subject, and without it, particularly in reference to Vietnamese history; much of the narrative of the “American” war is meaningless.
The book displays great scope and span. There isn’t much he neglects. He covers the Australian, American and Vietnamese perspectives, compares reactions to the war and its aftermath by Nashos and regular soldiers, gets behind the scenes into the political machinations of the day, and pulls all of this material together in a way that is very punchy and readable.
Some extracts – On Nashos returning – “..a unique aspect of the Vietnam War is the collective cruelty of a nation that ordered, with the threat of a two-year jail term, a 20-year-old lad to go to war – then damned him for going”.
- On what some commanders thought of the war – “They saw Australia’s involvement for what it was: a diplomatic gesture rather than a military necessity.
In essence, the troops were being asked to risk their lives to fulfil a diplomatic
courtesy to America.”
- On Agent Orange – “After forty years, one might think a politician would feel, at the very least, a responsibility to acknowledge past mistakes in relation to the chemical poisoning of soldiers. None has done so in Australia”.
- On casualities - "The human cost of the war, in terms of personal grief and moral degradation, is immeasurable. In our helplessness, we surrender to statistics: 4 320 Australian soldiers dead and about 3,000 wounded; 42 58,193 Americans dead and about 300,000 wounded; 43 220,357 South Vietnamese troops dead or missing in action and 1.17 million wounded; 44 666,000 Viet Cong and North Vietnamese troops dead, 45 with the possibility that a third were civilians mistaken for enemy troops or deemed legitimate targets. Of South Vietnamese civilian casualties, about 325,000 were confirmed killed (rising to a million, depending on your source and definition of a 'civilian'), 30 per cent of whom were children younger than 13. In total, an estimated 65,000 North Vietnamese civilians died as a result of US bombing.46 The Viet Cong assassinated 36,725 civilians between 1957 and 1972;47 the North Vietnamese and/or Viet Cong assassinated 166,000 South Vietnamese civilians.48 About three million Vietnamese people are believed to have suffered herbicide poisoning. In total, 3.5 million people died in over fifteen years."

This book will probably offend past members of the ant-war movement, politicians of the time on both sides, the American military and some Australian commanders. It won’t offend the troops.

As far as I’m concerned, it’s the best work on the subject I’ve read. I’d classify it as a “must-read”. If you can’t afford the (steep) $55 hard back version, wait for it to come out in paperback, or to arrive in your local library.
at November 03, 2007 No comments: 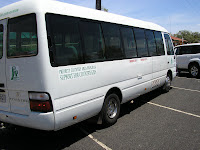 It’s interesting to read the nonsense on many of the redneck blogs about “unfair” support for minorities.

One minority often neglected are people who live in remote and rural communities. For years, the schools in these communities have been supported by PECAP (Priority Educational Country Area Program). Years ago in Mount Isa, I was responsible (in the Social Justice portfolio in the North West Region) for this program. School communities wrote submissions which were approved by local PECAP committees. I remember being amazed at the efficient and innovative ways in which the money was used to support bush kids.

The parents of these kids pay the same taxes as everyone else, but out here they rarely receive anywhere near the same services.

One common strategy is the leasing or purchase of small buses used to conquer the vast distances. These buses are often shared by a cluster of small schools. In this case, the bus illustrated was used to carry a whole school (15 kids) into a neighbouring larger centre to spend a week at a swimming camp. Because there’s nowhere to swim in their isolated township, these kids would otherwise miss out on the “Learn-to- Swim” program available to others.

This way they concentrate a semester’s swimming into one week. Given that temperatures are already into the 40s out here, it’s a pleasant way to spend a week. 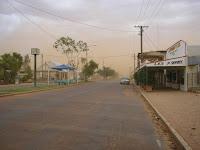 My work this week takes me as far West as Quilpie. If you continue from here you encounter Windorah, Betoota and Birdsville. After that, you run out of “civilisation” and Queensland more or less simultaneously.

There was a dust storm when I arrived, which soon became mud and then rain. The locals were very pleased to see this – I think about 10mls was the result. I told them I always bring rain, so they are demanding regular visits.

It’s a pleasant outpost, even if daytime temperatures are in the high 30s/low 40s. It reminds me of Mount Isa in that most of what is required is available – it just takes so long to get here.

By night the sky is gloriously clear after the rain – it was worth the trip just to look at the starscape. Tomorrow I head back East to election campaigns etc. It’s saner out here.
at November 01, 2007 No comments: