This is my other daughter's effort.

She is younger, so it's a bit more experimental.
We were cruising down the Perfume River (Hue) at dusk.
The soundtrack is provided by a Yanmar diesel.

I don't know why she turned the camera sideways at 0.53.

She doesn't either - seemed like a good idea at the time.

The Yanks bombed the bejesus out of Hue during the Tet offensive.The Battle for Hue lasted 25 days.
You're safe now, dear readers - this is the last one.
at March 12, 2011 2 comments:

A Drive in the Country

For reasons I don't understand, suddenly I am able to post videos longer than a few seconds.

You can therefore expect to see a few more. I have a backlog.

This one is a drive in the MX5 a few Sundays ago. The camera is stuck on the dashboard with blu-tak. It works. The road is between Withcott and Murphy's Creek, an area devasted by the 10th January flooding.

They're only just beginning to recover, although this particular sequence doesn't reflect that.

I was going through some old files today, and dug this up.

It was taken by one of my daughters in the old quarter of Hanoi when we were there a few years ago. She just pointed the camera at whatever took her fancy. Consequently, quality is poor.

It's great example of the wierdly organic flow of the traffic in this part of the world.

Watch the negotiation of the busy intersection at about 1.32.

I wonder how long my mate from my last post would last in this environment. Horns are used widely and to good purpose.
at March 11, 2011 3 comments: 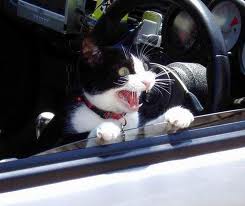 Last Wednesday I had to travel down to Brisbane to take some documents to No. 2 daughter.

Traffic was heavy all the way, and the M5 was a parking lot at about 8.30am. So I turned on the radio and resigned myself to a slow trip. There were no deadlines to meet (except catching up with daughter before she left for Uni at 10am), so I was relaxed and comfortable.

At one point, there was traffic merging from a slip lane on my left, so I held back and let two vehicles into the space I’d left. I make a practice of leaving at least one car length space when the traffic is stop-start. It’s easier on the ankles in a six-speed manual, as it leaves time for coasting.

Suddenly, a large black and blinged crew-cab came out of nowhere and began to cut across my path. When the gap closed to 10cm, I tapped the horn. It occurred to me that the driver hadn’t seen my relatively diminutive vehicle. This has happened before in the case of prime movers whose drivers are so far above the action, that there is a real possibility they’ll drive right over the top.

He kept coming, and I had to hit the stoppers pretty smartly to avoid contact. The driver behind me also had to brake hard – I heard the squeal.

Muttering to myself about the uncivil behaviour of my fellow road users, I was surprised to see the driver of the crew-cab gesticulating wildly – with the length of one arm out the driver’s window. He’s obviously taken violent exception to my use of the horn. I returned serve, but without my hand leaving the steering wheel. You know the gesture – more casual than aggressive.

Next thing I know, the traffic’s halted again, and he’s out of his vehicle sprinting towards me throwing his arms around and swearing profusely. I checked that both windows were up and doors locked. He looked intent on homicide. Fortunately this character (early twenties, sunglasses, slight build) had nothing in his hand, so I wasn’t too alarmed. The last time I felt threatened the person concerned was carrying an AK47. He wasn't. I thought about the fire extinguisher I keep in the cabin of the Mazda and how it might become useful.

He stood at the driver’s side of my car screaming at me. The only thing that was vaguely intelligible was “Get out of the fucking car!”

Given his agitated state, this didn’t seem advisable. Instead I sat in the car, eyes front, and pretended he wasn’t there. As a teacher, this strategy usually worked with out-of-control kids intent on homicide, so I figured it might help in this situation.

It seemed to infuriate him further, and he began to thump the window with his fist. The result of this was (I assume) a bruised hand, as he was hitting the window hard enough to have it moving in its frame.

The traffic began to move again, and whether it was this, or the bruised hand causing him to desist, he took off back to his ute and drove off.

I had my iPad on board and made a quick note of his rego and the rego of the vehicle behind (driven by a young woman) who would have seen the whole thing. I also used my hands free to phone the nearest police station and report the incident. I passed on the rego details of both vehicles (the perpetrator and the witness). The Junior Constable who took my call asked me to come into the station to make a statement.

Generally, I wouldn’t bother with this follow-up – I reckon I have better things to do with my time – but there was something about this bloke that was worrying. The thought that he might eventually do someone (or himself) a major mischief was a consideration.

The copper I spoke with was more senior – a Sergeant, and seemed to take the whole thing very seriously. I wondered why it was him, rather than the junior copper who took my statement. Turns out that this character was known to the police, and they were more than a bit interested.

I’m not surprised, after the exhibition a bit earlier.

Anyway, the update is that I received a courteous email from the Sergeant this morning –

The vehicle ****** is registered to a female person and I conversed with her. She stated that she was driving the vehicle at that time. I suspect that the driver was in fact her husband who has come to our attention before and I spoke to him also.
Both denied having any knowledge of the incident.
I have contacted the driver of ****** and they do not wish to get involved in the incident (not uncommon I’m afraid)

We are therefore at a bit of a stalemate. I have recorded this incident on our database and at least I have ‘put the wind up him’

I suppose the best outcome is that you were not injured and that's the main thing.
As I said, I have put an intelligence report on the system and it all adds up.
Sorry we couldnt be more of a help.

So according to this pair it wasn’t him – it wasn’t his car, it didn’t happen, and I must have dreamt the whole thing - or it was his wife in drag. The female witness, I suspect, decided after this exhibition that she wasn’t prepared to give evidence. I don’t blame her – she probably lives closer to him than I do and has to use that road daily.

What have I learned?

There are plenty of nutjobs out there. Some of them drive crew-cabs. Treat everyone else on the road as a homicidal maniac.

Coppers have a tough gig.

And next time, use the camera phone to record the incident. I could have done so, but didn’t think of it.

We're constantly being brainwashed by shock jocks about the alleged propensity of the "Left" for hate.

Take a look at this.

It was filmed by people attending the fundraising dinner of the Islamic Circle of North America (ICNA) in Orange County, CA. ICNA conducts charitable programs in the U.S., including disaster relief and family counseling.

Obviously disaster relief and family counselling are considered dangerous activity by some in Orange County.

Let's hope this nonsense stays on the other side of the Pacific, despite best efforts of B & B and Alan Jones to whip it up here.