For those who can't be bothered to read one of the many available Monash biographies, (as I am currently) here's a You-Tube of Monash - the Forgotten Anzac. It's really a bunch of snippets, but is worth a look if you have an hour to spare.
at January 02, 2015 No comments: 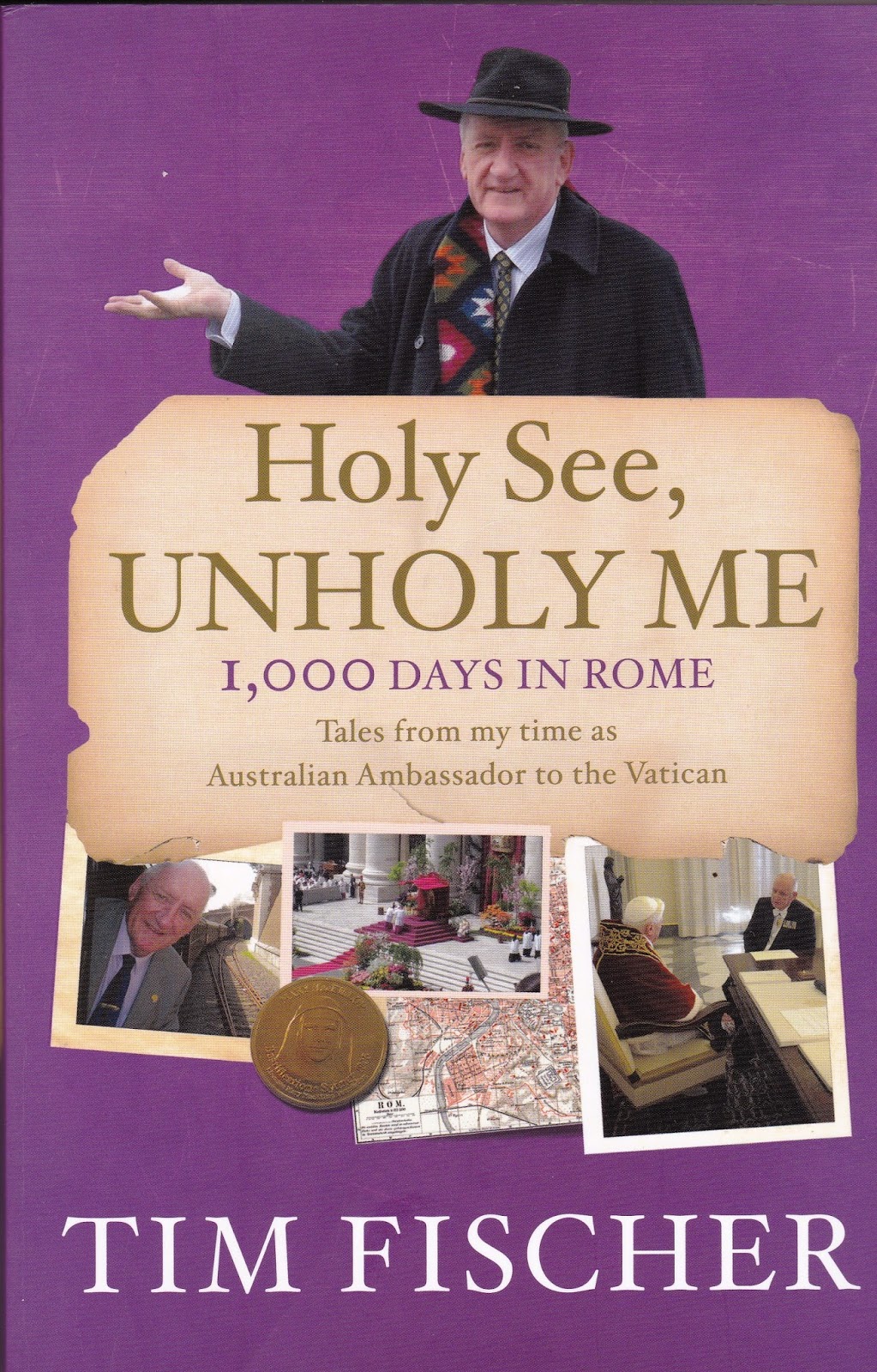 My Christmas stocking contained lots of books - so, gentle reader, be prepared for lots of reviews.

The first is a report on Tim Fischer's Holy See, Unholy Me.

I enjoyed this, but my fascination is derived more from the style than the content. Most are aware that Tim Fischer is an unusual bloke in many ways, and certainly atypical of ex-politicians in general and ex-politicians who become authors in particular.

I've taught plenty of kids on the Autism spectrum, and I reckon Tim is on that same spectrum somewhere, (on the brilliant end) and it comes across in his often convoluted, but always expressive prose. He acknowledges the editing role of a relative - who is very good at correcting my convoluted English - and he tends to write almost inside out.

By that I mean that he launches directly into a topic or issue with enormous enthusiasm, often at a velocity that leaves his readers (or this one at any rate) floundering. He also refers obliquely to one issue whilst in the middle of discussing another and this can be confusing.

Nevertheless, his insights into the inner functioning and culture of the Vatican are fascinating, and explain much, especially the sacking of our local Bishop, Bill Morris in May 2011.

He also provides a sharp perspective into the workings of DFAT, and the background of Australia's election on 18 October 2012 to the UN Security Council.

He also touches on the beatification of Mary MacKillop and the role of the Vatican during World War Two in reference to Jews in Rome in WW2. His observations on the Catholic Church's handing of sexual abuse are revealing.

It's worth looking at a few excerpts.

After four days of gripping but sober scientific assessments, delivered by several expert key speakers  in  a  down-to-earth way with no hint of hyperbole, the  conference  adjourned but with the promise of  a  post-conference  summary  statement. This ended up taking weeks, not days, but it was worth the wait. Although there are aspects of the statement that I do not agree with, it is a powerful wake-up call.
The  statement  is  entitled  'Fate  of  Mountain  Glaciers  in the Anthropocene', and is available on  the  Internet.  It argues that there is a ninety per cent chance that global warming is a result of the observed increase in anthropogenic (man-made) greenhouse gas emissions. Essentially it urges caution in relation to the high levels of carbon dioxide being pumped into the atmosphere, and it emphasises that it is fact that glaciers are vanishing around the world.
Whatever might yet be determined as the real cause of climate change, and whatever might yet be determined as to whether recent prolonged drought periods in parts of the world were merely pendulum swings or signs of long-term irreversible change; there are some hard-edged impacts that cannot be denied.
(p120)

On the war in Iraq –


Life and death remain  cheap  in places like Egypt,  Iraq and Syria as battles continue, including within Islam itself, such as Sunnis versus Shia;  more  bombings  of markets  and  public places such as Baghdad  occurred  in  2013.  The  call  of  George W Bush in mounting the  Iraq  War  leaves  a  bitter  legacy;  The work of the Vatican against  that  war  was  consistent  and  strong led by John  Paul  II.
(p207)

On the 2009 encyclical Caritas in Veritate (in reference to the Global Financial Crisis).

And the media launch plan for the encyclical was, as usual, essentially nonexistent. There were no controlled strategic leaks, no phalanx of cardinals briefed and ready to step up in each of their locations to endorse and explain the encyclical. There was no special one-off interview by the Pope with, say, CNN or the BBC. It was as if Caritas in Veritate should stand alone, drawing attention purely on merit.
If it had come out in time for GS leaders to properly consider it, it would have been a pointed reminder of the pillars of integrity that a businessman ought to pursue - in his own interest as well as for the sake of the world. It would have prompted the leaders to make the stand necessary to allow regulators to go after the bankers who had broken the law and ruined lives. To quote page 107 in part: 'Finance therefore - through the renewed structures and operating methods that have to be designed after its misuse, which wreaked such havoc on the real economy - now needs to get back to being an instrument directed towards improved wealth creation and development. Financiers must rediscover the genuinely ethical foundation of their activity, so as not to abuse the sophisticated instruments which can serve to betray the interests of savers.'
(p 154)

On the American Jewish Lobby –

The media skills of the American Israel Public Affairs Committee and others pushing the cause of Israel far outweigh the best the Vatican has to offer. Take brilliant Israeli spokesman Mark Regev, partly educated in Melbourne. He can spin with great effectiveness on any issue. In 2010 he made a plausible case for the Israeli military's killing of Turkish civilians on the high seas: no mean achievement.
I suspect, but have no proof, that these tactics are about representing a cause and maintaining influence and power rather than promoting a balanced and accurate portrayal of this dark chapter of World War II.  The American Jewish lobby is run by hardliners who get their daily feed from Jerusalem and Tel Aviv, and will cut no slack in terms of Israel’s policies in the West Bank, not allowing a debate as to whether that is actually in Israel's worst interests long-term. (In my own view, Israel, with its aggressive settlement expansion through the West Bank to the River Jordan, has become a ticking time bomb of its own making. Amid all this, Christian minorities will continue to flee the birthplace of their religion.)
I am happy to state that I am alive today due to the actions in Vietnam years ago of a Jewish national service soldier, Richard Edelman. At another level, the democracy of Australia is alive and well due to the brilliant leadership of Jewish World War I General Sir John Monash. I state this to head off the inevitable attacks on any review and praise of the work of Pope Pius XII.
(p 188-189)

One small (nit-picking) observation - Fischer’s reference to Richard Edelman is in error. The Nasho who saved his life in 1RAR when he was a platoon commander was Robert, not Richard Edelman.

I'd thoroughly recommend this book, and my respect and admiration for this unique Australian has been reinforced by his musings.