By the time the year is over, I’ll have spent about 60 nights in motels through my itinerant work.

As a result, I’ve built up a pretty fair list of irritants that go with this nomadic lifestyle.

Sometimes I wonder who designs motel rooms - and whether the people who do ever stay overnight in one of their creations.

In the first place, generally people who stay in motels have luggage. Why is it then, that many motel rooms don’t have anywhere to put suitcases (or in my case folding clothes hangers)? Often, the floor is the only space available.

Why are important bits of kit like mini-refrigerators and microwaves often hidden in cupboards? Why is it that one establishment I’m forced to inhabit has the clothes hanging space taken up with a fridge large enough for a family of six?

Why is there little or no bench space for a laptop, a box of files, or breakfast?

Why do some air-conditioners make as much noise as an F-105 on a strafing run? Why does the wall vibrate when the guest next door turns his shower on?

Speaking of showers – why don’t hot and cold taps conform to any standard pattern? I don’t as a rule wear my specs in the shower, so have learned the habit of checking the shower out first with glasses on to make sure I don’t end up with serious scalding. There are some places I stay where the shower feeds directly from an artesian bore, and comes out at very high temperature that needs to be cooled by the cold tap before you can safely shower in it.

On the subject of changing eyesight – why do those dinky little packs of toiletries all look the same and have labels such as shampoo, conditioner and body wash printed in 8 point font or smaller?

Why am I always given a room next to a squad of people working for Santos or somesuch who get noisily on the booze until the wee hours and then start their diesels up and idle them for ten minutes at 5am? I too drive a diesel, but it has no desperate need for lengthy 5am warmups.

These days I travel with chargers for iPad and iPhone, as well as the Bluetooth attachment for the car. Rare indeed are the rooms that have sufficient power points to charge all at once.

Then there’s the Wi-Fi. Most motels advertise it, but it usually works only ten metres from the transmitter. It almost never works after all guests are in. I’ve noticed a phenomenon whereby I’ll be writing reports on my work website, only to have the Wi-Fi metaphorically shrug its shoulders and boot me off after additional guests log on.

Most of next week I’ll be in motels. Maybe I should buy a swag and set up under the stars. It’s warm enough these days and I’d save a dollar or two.

Mind you – the grey nomads are an occupational hazard for campers out where I travel. I’d probably end up getting an ear-bashing from some Vietnam Vet from 2RAR in a Jayco Discovery towed by a Falcon ute….. 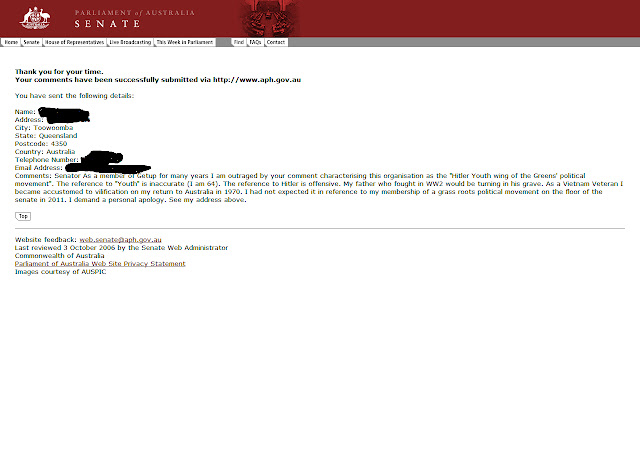 Macdonald's been on the turps again.

It will be interesting to see if I get a response. 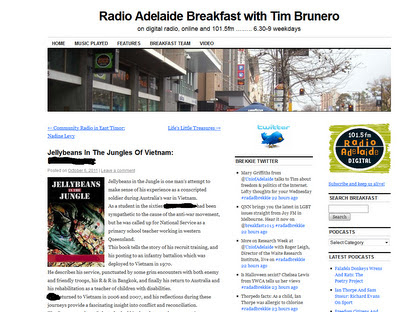 Writing was fun, but marketing is equally enjoyable. My book is selling steadily (1/4 of the 1000 copies print run so far).

This is better than break even point, so from here it’s all profit – not that I wrote it to make a quid.

It’s sold on consignment, although a few outlets are happy to buy say ten copies outright and give me the cheque straight up. One problem is shipping costs. Books are heavy. I’m currently looking at a quote from Toll-Ipec to get copies to centres like Adelaide and Sydney. I’ve sold plenty on-line.

The deal that works best is for me to send a consignment and to phone back in a month to see how they’re going. I’ve had to set up an invoicing system and a data base, tasks I hadn’t considered in my planning.

It’s necessary to maintain a momentum. People have to know the book’s out there. One way of doing this is radio gigs, and I’m doing one tomorrow on Radio National. This will make three so far (Local ABC and Radio101.5 FM Adelaide). There was discernible surge in sales after the last one.

Today I have a speaking gig here in Toowoomba. I’m never too sure what people want to hear. I’d be happy to say “Buy the bloody thing and read it”, but I doubt that would go down well. Apparently there are about 150 rolling up today, so it could be interesting. I’ll take a boxful and hope for some sales. Talk about singing for your supper….

I was surprised at the variability in the way the bookstores do business. The ABC shop requires that you go through their Sydney head office. Dymocks are happy to buy books if you walk in off the street and they like what they see, and Mary Ryan’s (a Queensland crew) have been great, even setting up a dedicated display in their local shop.

They also shout me free coffee, so I go there a bit.

The book trade is in a sorry state at the moment with bookstores closing all over the place. Gen Ys and Millennials as a rule don’t buy books. They get most of their entertainment on-line and via hand held devices.

Maybe I should look at getting Jellybeans on an e-book. It’s a fairly straightforward process.
Posted by 1735099 at 07:04 2 comments

So the Leprechaun’s spat the dummy and grounded Qantas.

This reminds me of the Australian pilot’s strike which began in August 1989.

This earlier dispute was about the Pilots and their wages. AFAP pilots decided to fly only between 9am and 5pm which effectively grounded the fleets of the airlines involved. Those affected were Ansett Australia East-West Airlines, Ipec and Australian Airlines.

Bob Hawke (PM at the time) brought in the RAAF, and they flew some routes to keep the traffic flowing. At the time, I was principal of a special school in Townsville, and was booked to fly to Brisbane for a conference.

On the day of the flight, I arrived at the airport with half a dozen other Townsville principals, after we were told the RAAF was doing the honours. Sitting on the tarmac like a beached whale was a RAAF C-130E.

It occurred to me at the time that I may have flown on this aircraft before, during training on the way to Shoalwater Bay and back, but then I remembered that in 1969, the aircraft were C-130As.

Nevertheless, I remembered enough about travelling on a Herc to prepare myself for a noisy and uncomfortable trip. I also remembered that it was not a good idea to choose a seat above the empennage for the undercarriage, as things got a bit cosy in that part of the fuselage where it narrowed to make space for the wheels. In this area it was necessary to interlock your knees with the person opposite because of the limited space.

I therefore gave up my place in the queue to move back just far enough to avoid this positioning, thoroughly confusing my colleagues, some of whom did likewise, and some who did not.

When we got to Brisbane members of the second group gave me an ear bashing because I didn’t warn them about the peculiarities of the C-130.

As to the current histrionics, the best understanding of what is really going on comes from Senator Nick Xenophon’s speech to the senate (under parliamentary privilege) on 23rd August 2011.

Qantas has systematically built up the low-cost carrier at the expense of the parent company. I have been provided with a significant number of examples where costs which should have been billed back to Jetstar have in fact been paid for by Qantas. These are practices that I believe Qantas and Jetstar management need to explain. For example, when Jetstar took over the Cairns-Darwin-Singapore route, replacing Qantas flights, a deal was struck that required Qantas to provide Jetstar with $6 million a year in revenue. Why? Why would one part of the business give up a profitable route like that and then be asked to pay for the privilege? Then there are other subsidies when it comes to freight. On every sector Jetstar operates an A330, Qantas pays $6,200 to $6,400 for freight space regardless of actual uplift. When you do the calculations, this turns out to be a small fortune. Based on 82 departures a week, that is nearly half-a-million dollars a week or $25½ million a year.

My question for Qantas management is simple: are these arrangements replicated right around Australia and why is Qantas paying Jetstar's bills? Why does Qantas lease five check-in counters at Sydney Terminal 2, only to let Jetstar use one for free? It has been reported to me that there are other areas where Jetstar's costs magically become Qantas's costs. For example, Jetstar does not have a treasury department and has only one person in government affairs. I am told Qantas's legal department also does free work for Jetstar.
(Hansard 23rd August 5259 19.37)

Given what Xenophon has revealed, there should be a judicial enquiry into the actions of Qantas management in flensing Qantas to stabilise Jetstar.
Posted by 1735099 at 13:14 2 comments