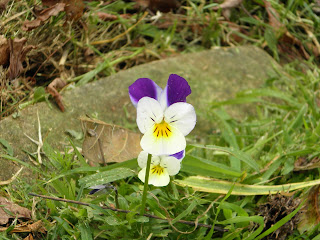 My bride calls these things “Johnny Jump-ups”.
Their botanical name is Viola Tricolor, and according to Wikipedia, they’re also known as Heartsease. They’re a common European wild flower, growing as an annual or short-lived perennial. They’ve been introduced into North America, where they’ve spread widely.
I’m glad they’ve decided to live at our place. Spring is on the way, and the garden is slowly coming to life.
at August 25, 2011 No comments:

Truckies have been in the news recently with the quaintly-named “Convoy of no Confidence” attracting media.
Here in Toowoomba (where it passed through about 8am on Saturday morning) it was scarcely noticed.
The normal gridlock that is James St looked like it always did at 8am – a bloody mess. It’s an area ideally avoided at the best of times, but occasionally it is simply plain dangerous.
James St is (in theory) four lanes in both directions, but it is narrow, and lined by very large trees. In Toowoomba, there are riots and disorder if trees are removed, so they’re left in place, and pruned so that they look like bonsai gone mad, and the larger trucks have to hug the centre lane to avoid them.
This compounds the gridlock, as sections of James St (which goes right through the centre of the city) are pretty steep.
Routinely, trucks catch fire or break down in James St, and you need a cut lunch to get from one side of town to the other if you use it. There was a major emergency a few years ago when a fuel tanker came to grief – police, firies, the whole deal. If one of these things did go up in the middle of the CBD, the scenario of ignited fuel running down the steep street doesn’t bear thinking about.
I am very familiar with truckies as I share the Warrego Highway with them, and each year the “sharing” involves 20000km of driving.
On the whole, the driving standard of your average Truckie has improved in the last couple of decades, mainly as a result of the cowboys being squeezed out of the industry because of escalating costs. The exceptions are the drivers of the cattle crates. They are always in a helluva hurry, their vehicles often look like they’re not maintained and they trail a mist of cattle piss which harbours Q Fever. It doesn’t do much for the amenity of James St. The pong remains long after the trucks have gone.
What is ironic about trucks on the Warrego, is the fact that it is paralleled much of the way to Roma by a perfectly good rail line. This rail line is almost always free of traffic, except for coal trucks from Felton. Nobody makes a quick quid out of rail in this country, so the trucks use the Warrego which is rapidly being wrecked by the grain trucks, the cattle crates and the mining infrastructure being carted west on the backs of the trucks.
The miners don’t give a stuff about the road, even to the extent where they casually wreck public infrastructure in the process.
Decades of corrupt policies have allowed this nonsense to persist, so it is now embedded in national infrastructure. The subsidies paid to road transport are amazing, and whilst they continue, nothing will change. (See p55 in the linked report).
Given the billions paid in subsidies to this industry, the slogan “Truckies carry this country” should read “This country carries truckies”.
at August 23, 2011 1 comment:

We’ve heard plenty about the triumph of democracy in Iraq.
It’s interesting to compare the lot of Christians in Iraq before the invasion of the Coalition of the Willing.
This quote from an article by Archbishop Cranmer sums it up fairy neatly.
Saddam was too preoccupied with persecuting the Kurds and Shi’as to bother much with the Christians, some of whom, like Tariq Aziz, rose to the highest offices of state under his regime. By the time of the 1991 Gulf War, they numbered about one million. By the time of 2003 invasion of Iraq, they had fallen to about 800,000. Now there are about 500,000 remaining. And they live each day as if it were their last, having seen their churches bombed, their congregations sprayed with bullets, and their priests brutally beheaded and dismembered. Christian boys are being crucified and girls are being raped.
I can’t vouch for his account, but the numbers, at least, are accurate.
The Catholic Leader has also been reporting on the conditions for Iraqi Catholics.
It’s interesting that we hear so little about this in the MSM.
I guess it doesn’t fit the narrative.
at August 21, 2011 1 comment: