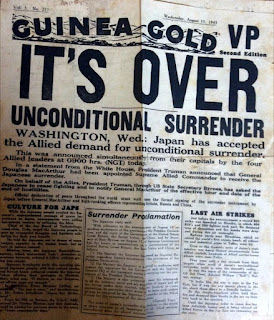 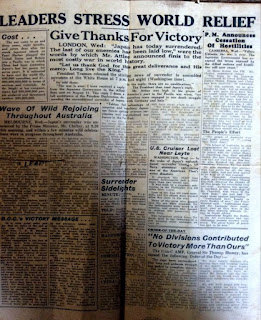 I’m going through some documents collected from my mother’s personal effects.
The pace of life has slowed a bit, gentle reader and I have time now for this kind of thing.
Mum died in 2001, and this material has been stored away for years.
I’m only now getting around to going through it, and have turned up something very interesting.


My dad served in New Guinea in World War Two. Stashed away in a folder I found the documents above.
They are scans of a newspaper issued to Australians and Americans serving in Papua New Guinea between 1942 and 1945.

Dad was obviously aware of the significance of this particular issue of Guinea Gold, and brought it home with him, and my mum preserved it.

Click on the images to make them (almost) readable.


I should probably send them to the AWM. 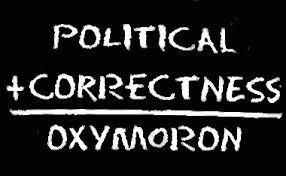 This term gets a great deal of use.

It’s usually directed at individuals making statements about controversial issues, and these statements are more often than not directed at aspects of human behaviour driven by fear, apathy, or plain ignorance.

It’s very easy to apply the “politically correct” label to any opinion that is inconvenient, or that doesn’t accord with the values and beliefs of the person using the term as abuse.

I’ll give you an example, dear reader.

I’m a member of a closed group on Facebook inhabited by past or serving members of a military unit. Generally, opinions expressed are remarkably consistent, but they are often different from mine.

The same goes with a number of well-patronised blogs whose themes relate to conservative politics.

Should I venture an opinion which differs from the mainstream, two things invariably occur.

First, my bona fides are questioned, usually asserting that I am using someone else’s regimental number. After all, how could I dare to express such opinions unless I was some kind of agent provocateur?

The fact that my identity is very easily checked seems to cut no ice at all.
The other frequent result is that I am accused of being brainwashed at university.

This is pretty bizarre, given that I spent ten years of my life all up at various universities. Obviously the brainwashing must have been very effective, because the other fifty-nine years I’ve been around seem to count for nothing.

It’s boringly predictable, but I continue to be entertained by this same predictability.