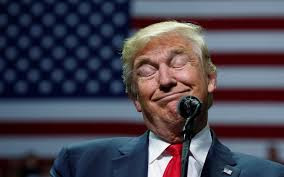 It has occurred to me that rather than ridiculing Fatty 5D*, it might make more sense to examine exactly what he says, and subject it to some basic fact checking.

At a rally in Melbourne, Florida, a few days ago, Trump said in reference to Sweden - "they took in large numbers - they're having problems they never thought possible" (about 40 seconds in). He was referring to refugees (although he dehumanizes them by using the word "numbers".

The first part of the statement is correct (more than 150000 in 2016), but let's look at the second part - "problems they never though possible".

Trump and his supporters claim that terrorism is an issue in Sweden, and that refugees are committing rape at an unprecedented rate. Let’s fact check those two propositions.

Let’s look at terrorism first. Indeed there was an incident. That was over six years ago - back in 2010 – https://en.wikipedia.org/wiki/2010_Stockholm_bombings

Looking at the second proposition – Politifact is generally reliable – http://www.politifact.com/truth-o-meter/article/2017/feb/20/what-statistics-say-about-immigration-and-sweden/

If you don’t accept Politifacts findings, you can always read the Daily Telegraph, not noted for being a journal sympathetic to refugee causes – http://www.telegraph.co.uk/news/2017/02/22/data-analysis-true-scale-immigration-crime-sweden-five-charts/

An extract – “Sweden’s crime rates are typically low compared with other nations and – contrary to Trump’s belief – there hasn’t been a refugee-driven crime wave in recent years. In fact, the latest figures show that the rate of crimes against life and health have actually decreased in recent years.”

In case you don’t trust either Politifact or the Telegraph, you can always go to the Swedish statistics – http://www.brottsrummet.se/sv/sexualbrott

It’s in Swedish, of course (relatively unsurprising), but Google translate is your friend. Try to find evidence of an outbreak of rape committed by refugees in these figures. I couldn't. But then, my Swedish is not good.

You have a go.

It’s interesting, of course, to compare Swedish and US crime stats – https://www.numbeo.com/crime/rankings_by_country.jsp

Sweden is safer. Maybe Fatty 5D* needs to sort his own backyard before he smears the Swedes.

*Trump was deferred 5 times when drafted for service in Vietnam.
at February 24, 2017 No comments: