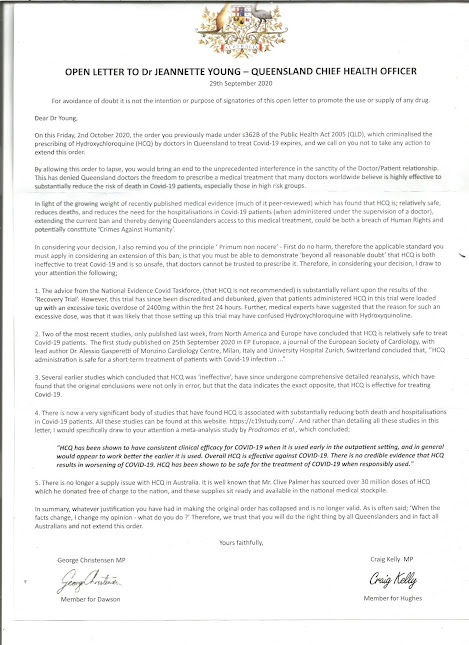 This missive was dropped into our letterbox the other day.

It is over the signatures of George Christensen (Federal LNP Member for Dawson) and Craig Kelly (Federal Liberal Member for Hughes). This is passing strange, given that I am a constituent in the Federal electorate of Groom.

What is stranger is that this is an open letter addressed to a Queensland state public servant, a couple of weeks before a state election.

Under the Westminster system, federal members (especially those from interstate) have no business writing to state public servants. If either Kelly or Christensen were senators for Queensland, there may have been some justification for the letter, but the process is actually a reversal of Westminster protocols, in that public servants are expected to advise politicians, rather than the other way around.

But it gets stranger. I emailed both Christensen and Kelly. The latter replied to my email (Christensen was prepared only to acknowledge it) and Kelly claimed to have no knowledge of the letter, despite that it was over his signature.

The staffer in Christensen's office in Mackay said much the same thing when I phoned to ask why there was no acknowledgement to my email. She claimed to have reported it to the electoral commission.

This begs a couple of questions. The first is the origin of the letter. It did not stem from the office of either of the signatories, so has to be a forgery. Where did it come from, and who disseminated it? It was a glossy pamphlet, offset printed, and had the Commonwealth coat of arms on both sides. Getting it circulated (setup and distribution) would not have been cheap.

As election material produced in a lead-up to a poll, it did not carry the required political party authorisation, which is a breach of the act.

There is one very wealthy and fairly large Queensland businessman prone to disruptive stunts. Perhaps I am cynical, but I can see his grubby hands all over this one. The content is classic snake-oil material, typical of this individual who is reported to have bought large quantities of the chemical referred to in the letter, only to find that no doctors anywhere in the country will use it.

Remember how he was going to build a Titanic replica, and how that sunk without trace?

By the way, if you're in Queensland, and tired of getting unsolicited SMS messages from Mineralogy about the state election, here's a remedy - email admin@unitedaustraliaparty.org.au and request that they remove your personal details from their database. Send a copy to ecq@ecq.qld.gov.au (Queensland Electoral Commission).

Alternatively, you can phone 08 9324 2227 (Mineralogy Perth - the only number that is answered) and make the same request.