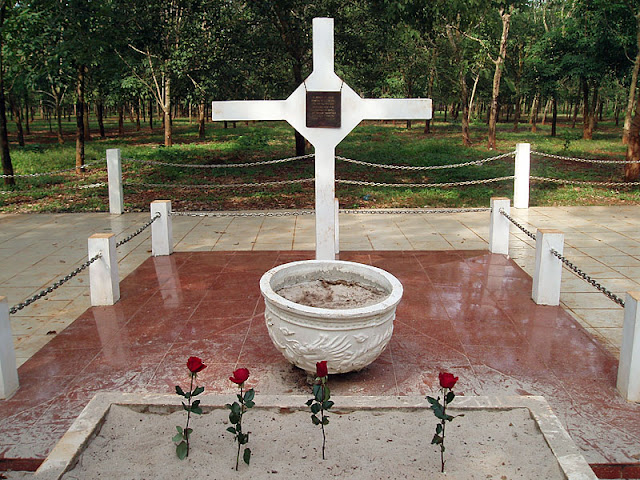 Here is a link to a piece on reconciliation.

It's written from the heart, and without regret or apology.

Email ThisBlogThis!Share to TwitterShare to FacebookShare to Pinterest
Labels: Vietnam

There are some issues in Australian politics that invite disaster unless there is a bi-partisan approach.

Amongst these, I would list national policy on disabilities, climate change and asylum seekers. There are others, but a quick glance at our history will reveal the absolute tragedy that follows the taking of adversarial positions on these three.

The best example of what follows when this principle is ignored comes from recent history, specifically our involvement in Vietnam.

The consequences of the fear, hate and bitterness generated during that conflict continue to be visited on Vietnam veterans, and often on their families. If you doubt this, check the statistics.

Pandering to fear and loathing in the electorate works, but it creates victims. For the purpose of this exercise, let's use the military term "collateral". In the case of Vietnam, returning soldiers became the collateral. Considering refugee policy, "collateral" are the asylum seekers.

Most recently, we have the spectacle of the unfortunates turning up after the legislation went through this week, being exiled (like colonies of Robinson Crusoes) in godforsaken outposts in the Pacific.

When John Howard let the genie out of the bottle back in 2001, I doubt he understood the monster he was creating. That genie, fed on xenophobia, racism, and gut fear, has overwhelmed rational discourse, and risks poisoning our value system for generations.

Again, paralleling the adversarial tone set up around Vietnam, we saw fear (the Communist hordes from the North), used effectively to wedge the opposition. This worked for a while, but inevitably, when it ceased to work, the community turned on the diggers.

Victims were created - generally all diggers, but particularly the conscripts who had no choice. These days the victims are the asylum seekers, whose choices are also limited. At least conscripts not found to be conscientious objectors knew how long they’d be behind bars. Refugees will be denied this certainty.

We see absurdity used to justify extremity – back then random twenty year olds conscripted to kill and be killed – these days children locked up behind razor wire.

The saddest aspect of all is the hypocrisy shown on all sides of politics. The most recent legislation is justified by the Coalition as a method of saving lives. The under song has nothing to do with saving lives, and everything to do with harnessing the latent xenophobia which has been part of our national psyche since the anti-Chinese riots at Lambing Flats.

They make cynical use of this national ugliness, at the same time dressing it up as compassion. A quick reading of the blogosphere reveals this undercurrent.

Labor has capitulated because they have been wedged. Humanitarian Principles have vanished overnight. Expediency is dressed up as compassion. The expert committee was a device to outsource moral responsibility. It worked a treat.

There is and always has been a “solution” - although using this word brings us into the company of the notables who espoused the “Jewish solution”. John Howard had no qualms about reintroducing the term into our national vocabulary. This puts him in interesting company.

The successful template I refer to was written during the time of the resettlement of hundreds of thousands of Vietnamese boat people. It would take a decade or more – would cost a great deal – would involve some heart searching in terms of our relationships with our neighbours to our North, but it is possible.

It worked back then, because the approach in this country was bi-partisan. The xenophobia was always there, but it was never harnessed. Back then, we had leaders with backbone.

It won’t happen in 2012, because we are governed by cowards and opportunists on both sides of politics.

Howard's monster will endure. The collateral damage will last for decades.

Email ThisBlogThis!Share to TwitterShare to FacebookShare to Pinterest
Labels: Refugees

Question - How do you know when Campbell Newman's lying?
Answer - When his lips are moving.

Thanks to my sister whose public servant hubby was asked to take a forced redundancy last Friday. 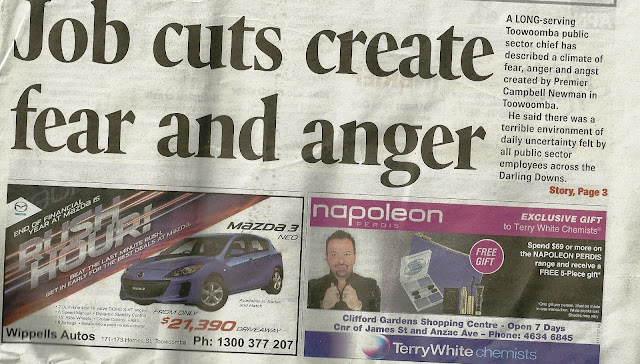 As blogged earlier, I’ve spend six of the last ten days in Melbourne.

Long enough, I reckon, to form an opinion of the metropolis on the Yarra, at the arse end of the country. (If you take exception to the last sentence, take a look at a map).

First of all, let’s deal with the clichés. They’re all true.

The Yarra flows upside down.

Melbournians will attend any and all sporting events in droves irrespective of weather.

I have photographic evidence of each of these.

For some reason, my father hated Melbourne with a passion. He trained there during WW2 as a RAAF radio fitter, before he went to New Guinea.

He maintained that there were more anti-Catholic bigots per square mile in Melbourne than anywhere else in the country. There must have been an incident that generated this opinion, as my dad never spoke about any other place with such vehemence.

He also didn’t like the weather. I saw no evidence of bigotry, but he was right about the weather.

Another cliché is that the weather changes every few minutes. Based on last week’s experience, I can vouch for that. Problem was, it only ever changed for the worse.

The contact we had with Melbournians indicated to me that they are as a bunch, remarkably tolerant. They didn’t turn a hair at some of the outlandish behaviour exhibited by a group of veterans on the town, trying to recapture some of their lost youthful mojo, generally smiling fondly on us.

At least I thought the smiles were fond. I may have been wrong.

The exception to this tolerance was the taxi drivers or at least one in particular. Now I’m used to Indian taxi drivers – there’s plenty in Brisbane. But in Brisbane, they generally understand English, and know where the major landmarks are.

We found one who claimed he’d never heard of the Prahran RSL (one of the oldest in the city), and when one of my comrades said (and I quote) – “That’s bloody ridiculous”; he kicked us out of his cab for swearing. I kid you not.

In hindsight, there were four of us, and we were outside a hotel with over 500 veterans present, so we probably should have refused to budge. We could have held a sit-in. We did lots of things I hadn't done for over forty years. A sit-in would have taken me back.......

Later on, we found another driver who claimed to be ignorant of the existence of the Crown Casino. We found it for him on his GPS.

In summary then, Melbourne has some great restaurants, it’s well laid out with wide streets, the trams are great, and its cenotaph is a magnificent building.

But live there? Never in a month of Sundays. It is however, a great place for a reunion so long as you avoid taxis.
at August 12, 2012 2 comments: 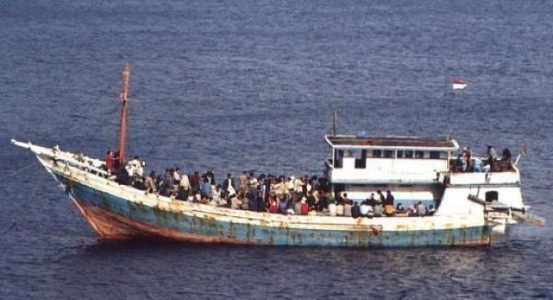 It's refreshing to find another Vietnam Veteran who shares my opinions on asylum seekers.

There are plenty, but they don't make as much noise as the bigots and xenophobes.

His take on the issue is well thought out and reasonable - also refreshing.
at August 12, 2012 17 comments: