Given the current once-in-a-century floods occurring in the country where I work, I've done heaps of wet-weather driving this week.
Some of the driving behaviour I've observed makes me wonder about my fellow motorists' skill level and common sense.
On Tuesday I did a round trip of about 550km in conditions which could only be described as diabolical. The rain was torrential, and it simply didn't stop. 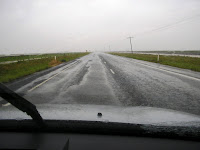 As a consequence, the surface water wasn't draining and there seemed always to be a centimetre or two on the road. If you look at the pic, you'll notice that the road surface has been damaged (principally by grain trucks) leaving depressions in the wheel tracks on both lanes where water pools.


The trick is to keep out of these depressions to avoid aquaplaning, which is easy when there's no other traffic, but is not always possible when there is.
It also helps to slow down (the road illustrated is 110km/hr limited) and to disengage the cruise control. Even taking these precautions, you could feel the grab at the wheel caused by the tyres shedding litres of water every second, and occasionally the unsettling twitch through the steering characteristic of aquaplaning.
You learn to avoid shiny road. That's a sure sign of a layer of water.
Years ago, whilst driving in the rain near Emerald, I was overtaken by a couple of young blokes in a Falcon wagon, which aquaplaned and fishtailed as they were getting back on the correct side of the road. I had a grandstand view of the consequences, and they weren't pretty. The car left the road and flipped three times, shedding bits and pieces as it went. The battery flew out, and missed my car (a Renault R12) by centimetres and the wreck finished right way up fifty metres off the road.
I had to provide first aid, and flag down a car which was on the way back to Emerald to alert the ambulance which arrived twenty minutes later. I had twenty minutes to consider the consequences of aquaplaning whilst looking after these two. Fortunately, they weren't badly hurt as their seat belts kept them in the car.
Maybe this experience effects how I drive in the rain.
On Tuesday's trip the car I was driving had power assisted rack and pinion steering, which is almost universal these days, and steering sensitivity is of high quality. Understanding how much grip is available is a no-brainer with this setup.
It also has a selectable four-wheel-drive transmission which helps, although engaging 4WD in these conditions seemed to have a marginal effect.
What horrified me was the number of drivers who were acting as if the sun was shining and the road was dry. By this I mean that they were travelling at high speed, and apparently paying no attention to the water on the road. They were also inclined to drive two metres from my rear bumper - not preparing to overtake - just sitting there for reasons beyond my understanding.
It's no wonder that the towies park their trucks at strategic locations on the highway at the first sign of rain.
Sometimes I wonder if the design of the modern car is part of the problem. Motorists are so insulated from the environment these days that they forget (or never learn if they're young drivers) that conditions are a factor. Many drive their cars as if they were involved in a simulation. Unfortunately, the consequences of a mistake or a bad decision in real life differ from what happens in a simulation.

That's one of the advantages of my MX5. Driving it brings you into immediate and total physical involvement with the environment.
at March 05, 2010 4 comments:

I've been doing this for four years now, and this is the first time that I may have to defer/postpone work because of the weather.
It's a personal inconvenience, but I doubt that the people where I'm heading will be upset.
Some of the falls are already records, and there's a low brewing up off Fraser Island.
Let it rip, Hughie!
Update
02.03.10
I got as far as Miles. When I tried to head North along the Leichhardt Highway, a fairly large gentleman wearing a fetching shade of blue, explained politely that this was not a good idea, and I should go back in the direction from which I had come.

He also suggested that I do this as soon as I could, as a "metre of water" was coming down the creek. I wasn't sure exactly what this meant, but I did as I was told.

This wasn't surprising, given the conditions. I haven't seen so much rain out this way since 1974. 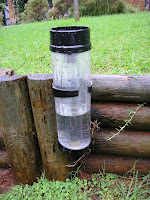 The rain gauge looked interesting when I got home.
Tomorrow is another day.....
at March 01, 2010 No comments: