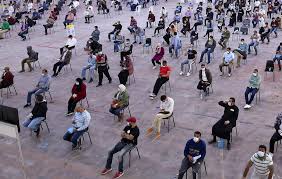 The media is having a field day with its coverage of the pandemic.

Nothing sells newspapers or encourages clicks so much as fear, especially when the threat is invisible, unpredictable and ubiquitous.

Initially, in this country at least, the reporting and debate was generally apolitical. That has begun to change, and we have fallen in line with our neighbours across the Pacific who saw it from the get-go as both a threat and political opportunity.

Reference the Chinese character for "crisis"(危机).

More recently, the arguments have drilled down to balancing the damage done by the shutdowns against the risk to life by lifting them. This is somewhat of a false dichotomy, however, as there is often a difference between regulation and behaviour.

Breakouts in New South Wales (the Ruby Princess) and Victoria (the quarantine failure) have made that abundantly clear.

If indeed, there is a real connection between economic performance and the level of regulation attempting to control the spread, it should be detectable in the statistics.

For the purposes of this exercise, I'll compare pandemic deaths per million with economic performance in the following countries - Japan, Germany, UK, Canada, France, Italy and the USA.

The sources (Worldometer and BBC) are generally respected, and their statistics are based on IMF data.

Tracking these figures does not seem to provide any correlation between death rate and unemployment. In fact, the reverse could be seen to apply, given countries such as Japan and Germany combine lower death rates with lower increases in unemployment.

One country that has made a virtue out of avoiding lockdowns is Sweden. Examining the economic outcome of that strategy, however, does not seem to bear out the hypothesis above.

The Swedish unemployment rate of 9% remains the highest of all the Nordic countries, up from 7.1% in March, although it is not yet officially in recession. Its death rate is high at 577 per million.

The Swedish economy has performed better than other European economies, but remains close to average for the Nordics. It is reasonable to conclude that there are so many other factors involved in any country (state of the health system, geography, demography) that a simple cause/effect relationship simple cannot be determined.

Some facts are indisputable. The USA has suffered the highest worldwide total death rate (running at 1000 + daily) as this is written, and Australia, despite recent deaths in Victoria, one of the lowest at a total of 678.

Is it worth taking the risk to open up? Nothing statistically available right now offers a guide.

Most countries are adopting a cautious approach. The fact is, we won't know the full story for years.