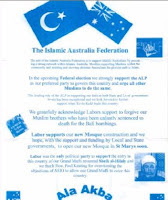 The rich vein of racism that lurks below the skin of Australian politics has been tapped again - this time in a "boys own" stunt in Lindsay (Western Sydney). I'm less outraged than saddened that it's obviously still out there ripe for the picking. This country won't have come of age as a fully developed democracy until it's gone. I doubt I'll see it in my lifetime.
Posted by 1735099 at 16:28 0 comments

Some Mothers Do Have Em 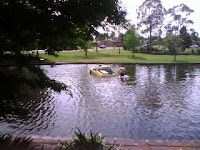 A short time ago, I was driving my daughter to work at about 8am. As we passed a nearby park which has a lake in it, she said "Dad, why is that car in the Lake?"
Sure enough, a grotty looking Falcon ute was parked well towards the middle of the lake, a good thirty metres from the bank. The water wasn't deep, (about 750mm) but the shirtless driver was frantically trying to rescue a tool kit stored in the tray. What I couldn't understand at first glance was where it came from, as the direction it was facing didn't make any sense in terms of the surrounding roads. I also noticed a Toyota Camry parked near a service station with a disgruntled looking driver examining the front bumper which was partly detached.
I pulled up, and called out to the bloke in the lake "Are you OK?"
He completely ignored me, and continued to try to remove the tool kit from the tray. This was presenting him with a problem, as the bottom of the lake was muddy and slippery.
Another passer-by had seen the incident, and explained to me that this fellow had accelerated out of a nearby service station at high speed, straight into the Camry which was driving by at the time. It then took off in reverse, hit a 60km sign and continued into the lake. It narrowly missed a couple of kids walking along the footpath.
He didn't know why.
The police and emergency services arrived, and we went on our way.
The report in the local paper the next day explained the "why".
He had filled up at the service station and drove off without paying. He then ran into the Camry, and attempted to leave the scene at speed - backwards. He lost control and went lakewards. The police threw the book at him.
I snapped the shot with my mobile.
I don't know what he was smoking.............
Posted by 1735099 at 08:15 0 comments

Some of the more senior of us have long memories. We remember John Howard’s performance as Treasurer. .

The example of Whitlam’s economic woes as an argument against trusting Labor with the economy has become a feature on many conservative blogs – so it is valid to talk about Howard’s history.

It was commissioned by Bob Hawke the day after he took power in 1983, and authored by John Stone, Treasury Undersecretary. Inter Alia; it reported unemployment of 11%, inflation at 11%, interest rates of 22% and a deficit of $9.6 Billion in 1983 dollars. This $9.6 billion deficit is more than $40 billion in today's terms.

John Howard was Treasurer at the time. Stone characterised his record as the "worst economic performance since the end of WW2" with the Budget deficit "unprecedented in peace time at 6% of GDP".

During Howard's tenure as Treasurer, the 90-day cash rate peaked at 21% on 8 April 1982 while home loan mortgage rates were capped at 13.5%, and inflation peaked at 12.5% in September 1982. Peter Costello commented, in 2007, that "The Howard treasurership was not a success in terms of interest rates and inflation... he had not been a great reformer."

This little piece of history shows that Howard's line that the Liberals are always better economic managers is nonsense. Much of the strength of the Australian economy today is because Labor under Hawke and Keating had the courage to reform, something that the Liberals lacked...

The judgment of every economist and international financial institution is that the restructuring reforms undertaken by the Hawke government with the full co-operation of the trade union movement created the strength of the Australian economy today.