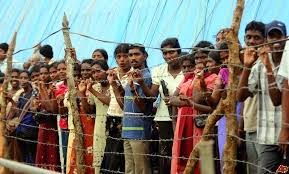 Below is an article on ethics in reference to asylum seekers which was included in this week's parish newsletter. Plenty of food for thought here -

When governments and other authorities treat people harshly, as is now happening to asylum seekers on Nauru and Manus Island, someone will normally ask whether what they are doing is right. This is the ethical question, and it will receive one of three responses.

Many will say that government policy making has nothing to do with ethical reflection. What a duly elected government does with majority support is by definition right. The strong do what they wish. and the weak suffer what they must. This position should be respected for its honesty even though it will corrupt a society.

Many will engage with the questions of right and wrong and draw conclusions. Some will argue that the harm inflicted by government policy is ethically defensible. Others will deny it.

Finally, some people will withhold judgment, arguing that the question is ethically complex and even confusing. Asylum seeker policy. for example. must take into account many issues, such as the protection of borders. the number of refugees Australia can take, the deaths at sea, the behaviour of people smugglers, the attitude of the community to refugees and the cost of receiving asylum seekers. An ethical judgment on the any part of the policy must await consideration of all these factors.

In other words we must offer an acceptable alternative policy before judging elements of an existing policy to be unethical.

I would argue that this position is mistaken. When we are considering the harm inflicted on people by governments the ethical questions are quite simple. The complexities and confusions arise properly only after we have answered them. They concern how to shape a policy that is both effective and ethically defensible, and how we are to handle living in a society whose government we believe to act unethically.

If we are asked whether it is right to inflict harm on others, we would normally say it is not. The exceptions are when people consent to the harm because it is for their own good, as it might be in medical procedures. or when the harm they suffer is in response to wrongdoing on their part, as it might be in gaol sentences, or when they personally represent a danger to society, as they might in the isolation of plague carriers. But when the disrespect for people's human dignity is inflicted to secure goals that have nothing to do with their needs or wrongdoing. It is clearly and simply ethically unjustifiable and it should be said to be such.

For the same reasons it is ethically unjustifiable for the Australian Government to imprison in dangerous and uncontrolled situations one group of asylum seekers in order that their hardship will deter others from claiming protection , and so from the risk of drowning  From the ethical point of view the ill treatment of asylum seekers is neither complex nor confusing. In fact in a just society ethical judgment simplifies the making of policy. It eliminates unacceptable options and so encourages good policy making.

Complex questions do arise after the ethical questions are answered. The first question is how to deal in an ethically principled way with the many factors that need to be addressed in good policy. We ought to engage with these complexities, and should expect from time to time to be confused by them. But our confusion at this complexity does not extend to the judgment of what is right and wrong in the way people are treated.


The second complex set of questions is psychological or spiritual in character. When we have come to a conclusion that people are being treated wrongly, how do we relate to people who argue that their treatment is right, or that governments should not be concerned with what is right or wrong? And if our judgment is shared only by a small minority in our society,

Should we keep our opinions to ourselves for fear of seeming self-righteous? Such questions can lead us to back off our judgment about right and wrong.


As we wrestle with these questions our proper stance is one of courage , simplicity and humility in holding to what we believe to be true we have Luther's words to guide us, 'Here I stand , I can do no other'.


And if we need ecumenical support, we have Ignatius' account of what is necessary for salvation: 'to obey the law of God in all things so that not even if I were made lord of all creation. or to save my life here on earth, would I consent to violate a commandment that binds me under pain of mortal sin'.


But especially if we are in the majority on any issue, the challenge is to recognize our fallibility, and to engage without shouting, or demeaning those who hold different views.


And finally, we can face complex questions about how we are to act.


Generally if we come to the judgment that our government is treating people wrongly, our judgment should flow into action, whether it be through prayer, conversation, writing to our local member, or attending a vigil for the afflicted.


I came across this short You-tube video the other day and it brought back some interesting memories.

My bride and I traveled on one of these strange contraptions back in the eighties when we were doing the obligatory young Australian exploring the UK and Europe thing.

I remember the unholy noise it made, the clouds of spray, and the thumping as the rubber skirts hit the swell.

We went from Dover to Calais in early August, and back again in late November.

Strangely, the sea state on the trip eastward was much worse than on the return journey, and took much longer than normal because we had to travel more slowly than the usual 40 to 60 knots.

This meant that the journey took an hour, rather than the 25 or 30 minutes that it should have.

We were driving a Bedford Dormobile at the time which we parked in the car hold, and then wandered into the cabin which was kitted out like a cross between an aircraft interior and a ship's seating deck.

You couldn't see much from the cabin, as the spray obliterated any view.

Still, it was fast, and from memory, relatively cheap.