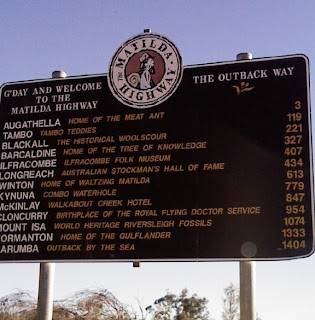 Last week I worked West of Mitchell - Morven, Augathella, Charleville etc.
The year has turned, and whilst the days are usually pleasant, out here there's an early morning crispness that often comes as a shock to coastal dwellers. I routinely feel restless at this time of the year, and start looking for something new to do or see. The Matilda Highway sign on the outskirts of Augathella didn't help. I'll go Northwest in June!
As I drove the air waves were full of wailing and gnashing of teeth about the Super Profits Mining Tax. I'm not so sure that a little closer to the coast (in the black soil country around Felton, for example), it won't be welcomed. It might also be seen by the residents of the Surat basin (where the mining and gas exploration industry has gone completely feral) as a Godsend   For many who already live there, it's not all good.
Local infrastructure is simply not up to the task. In one very small way, it's an embuggerance for me. Once upon a time, I could book accommodation one week ahead in places like Roma, Miles, etc. Not any more. If I don't get my bookings in about a month ahead, I'll be sleeping in my swag. This is because mining contractors bulk book accommodation as they set up drilling operations. They're not the hardy no-nonsense miners I remember from my time in the Isa. These blokes wouldn't be seen dead in your humble bush pub. They look down their noses on the locals and prefer to scoot back to the big cities on the coast at every opportunity. They even fly-in fly out to Roma, and it's hardly remote. As you drive into Roma airport you're confronted by the sight of hundreds of hired 4WDs with cute little orange flags indicating they're used for exploration. They store them at the airport because they're left there when the drillers head home to Brissie or the Gold Coast on the weekend.
Any local employment around the industry derives from servicing it - very few are actually employed in the drilling operation itself. And they bugger up the bitumen, as well as providing the most amazing mobile chicanes if you're unfortnate enough to have to share the roads when they're on the move. The combined damage caused by the mining industry and the floods this year has turned the Warrego Highway into a death trap.
The benefits to the local communities are at best hedged by the damage caused. The money goes east, piped out with the gas and trucked out with the coal.
When you hear the locals talking about "locusts", it's the drilling contractors and miners they're referring to, not the insects.
at May 22, 2010 No comments: