I've been "swanning" this week.

This was the term used when I was in 7RAR to describe hitch-hiking around Phuoc Tuy in various RAAF aircraft. It was not officially condoned, but when I was a POGO (Personnel on Garrison Operations) a blind eye was turned providing you finished up back at Nui Dat when the jaunt was over in time for your next duty. It usually cost a fixed quantity of the preferred tipple, although donations from the Q Store were gratefully accepted.

Most of my swanning was in Land Rovers (usually semi-official as an armed escort) but I very occasionally managed to get on aircraft. Some of my colleagues had seen most of Phuoc Tuy and the neighbouring provinces by the time they were RTAd*.

I was reminded of this experience this week when I hitch-hiked on another agency's aircraft in order to get to one of the more far-flung schools on my list. Between 7am and 6pm, I was able to visit two schools 700km from base, and 200km apart. If I had gone by road, I would have used three days by the time I'd covered the same territory, and the bulk of the time would have been spent in non-productive activity, viz driving down the Warrego.

This swanning is all highly formal and above board, involving reams of paperwork, approvals at all levels, and intricate Health & Safety briefings. It actually makes a great deal of sense, as the aircraft are already chartered for one agency, and another agency can tag along to share costs and improve efficiencies. In the end, the taxpayer shells out a lot less by this simple act of interagency cooperation. 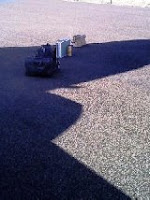 The day held a few surprises. One of them was the level of security at these very small airstrips. Since 9/11, every bush strip that operates scheduled services of any kind has to have pin code access to the flight line, and any aircraft on the strip must be properly secured. This leads to the unlikely spectacle of bush strips surrounded by three metre security fencing. At least it keeps the wildlife out. I can understand the reasoning. Any aspiring terrorist could hijack a light aircraft and use it to fly to a larger airport and in this fashion access a secure area, and use it as a jumping off point for an attack.

One downside of this is that the aircraft left on the strip are completely locked down, and by the time they've sat on the tarmac in 40 plus temperatures for three hours (as our aircraft had) they're not good places to be for the first half hour or so. I can report on good authority that it takes a Piper Cheyenne thirty-five minutes to cool down, even at 18000 feet.

The pilot was an interesting bloke, who looked about ten years younger than the aircraft. He was, however very safety conscious, following his pre-flight checklists to the letter prior to every departure. It surprised me to note that the controllers he conversed with were all in Brisbane, and their gender balance was about 50/50.

Incidentally, one of the schools I visited had a sign on the door of a small room entitled "Room for Improvement". I'm not sure what was inside, and didn't have time to check, but the next time I'm there I'll go inside for half an hour or so.

Maybe time in that special place will be helpful - assuming it's not too late for someone of my vintage, even if I have to travel 700km to get there. 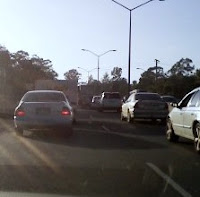 Because I have three sprogs studying in Brisbane, I spend a bit of time travelling in Lemming Land.

Lemming Land is the name I give to conurbations such as the one that stretches from the Sunshine Coast to the Gold Coast, and takes in all of metropolitan Brisbane. I have no choice but to approach it from the Ipswich bypass, well-known as one of the most congested (and dangerous) roads in the state.

Why "Lemming Land"? – Well because when I get caught in the bumper-to-bumper chaos that is a daily occurrence, I can't help but think of Lemmings. Generally, I avoid peak hour like the plague, but I had to get my number one daughter to an interview on the far north side at 8.30am, so didn't really have a choice.

I have, in the past, crashed in my son's digs overnight to get an early start, but that's not always a good idea. Twenty something males aren't always keen on overnight stays from sixty plus rellies – it cramps their style somewhat.

I left Toowoomba at 5.30am to give myself plenty of time. I was still on the road at 8.15. I got her there barely on time (she lives in the inner city) after a journey that was anything but stress-free. On two occasions (on the Ipswich bypass and the Centenary Highway), it would have been quicker to leg it.

Driving a car into the city is not smart, but invariably I have some item or another to deliver to one of the three. Ever tried travelling on a city bus or train with a stick-on mirror? It reminded me a bit of the crew from "Top Gear" travelling the length of Vietnam with paraphernalia tied on their scooters. (Hilarious stuff – I don't know if you watched it).

Can-do Campbell (Lord Mayor of Brisbane) might be advised to set up an infrastructure of large parking stations and a light rail network, if he wants to keep cars out of the city. They're dropping the limit to 40kph in the CBD, which might improve safety, but will do nothing at all to remove congestion. I couldn't live in Brisbane. The farther west you travel, the saner the world becomes.
at February 24, 2009 1 comment: