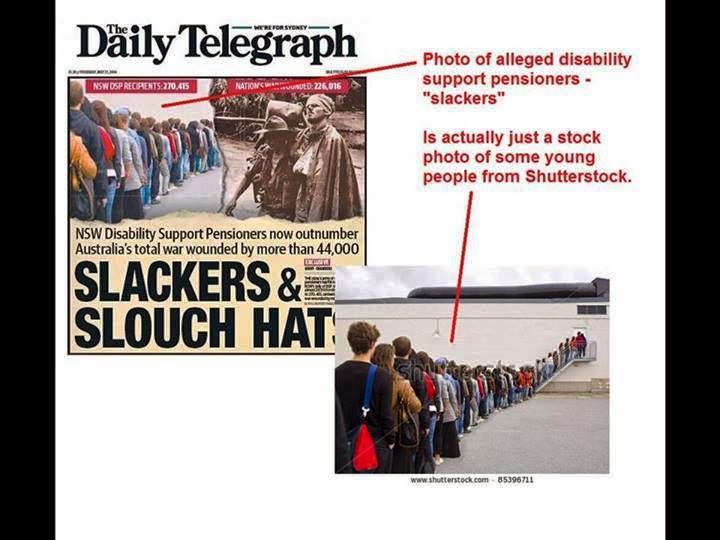 I've been reading newspapers since I was about ten years old, and have seen some gutter journalism in that fifty plus years, but this takes the cake.

It's despicable on so many levels.

In the first place it stereotypes people on the Disability Support Pension as "slackers".

It does this without any evidence except the rising numbers of people on the DSP.

What kind of "journalism" is that? Geoff Chambers (the person who wrote this bilge) must have been living under a rock for the last ten years. He obviously missed the news that mental illness has become a major community problem in that time, and that improved workplace safety practices has had an effect on injury rates.

Chambers obviously lacks the wit to consider that these trends have something to do with population statistics. His blaming the victim panders to bigotry and ignorance.

It probably sells more newspapers, much in the same way as salacious stories involving sex and violence sell well. Basically, this "journalism" is a form of pornography.

He obviously has no idea of the stringent and lengthy process involved in getting classified as incapacitated. He obviously knows nobody in this predicament, and forgets that it takes usually about three years to see the process through.

It's a similar process to that required for returned service personnel to be classified as Totally or Permanently Incapacitated, but at least the diggers have advocates assisting them. I doubt Mr Chambers would have the hide to stereotype TPI pensioners as "slackers".

Which brings me to the disgraceful comparison Chambers has employed, using returned Diggers in his quest to demonize DSP recipients.

He has used an iconic photograph (one of Damien Parer's series of historic Kokoda Track images) and set it besides a photo shopped picture of a queue of young people.

To use this photograph, and the wealth pf symbolism it generates, in this generalized smear, is about as low as you can get in print.

My father, who fought in New Guinea in World War two, would regard this as sacrilege. I'm sure Parer is turning in his grave. My twelve months on operational service in an infantry battalion in Vietnam in 1970 was ostensibly about defending the maintenance of Australian values of freedom, fairness, and tolerance. There is precious little of those values displayed in Chamber's piece.

My forty plus years of experience working with people with disabilities has taught me that this particular group of people should be lauded, not demonized, given the challenges they daily surmount to seek a reasonable quality of life. The Telegraph's attack on this vulnerable group is pure cowardice.

Mr Chambers, his editor, and the rag he works for have hit rock bottom - they can't descend from here.

Apologies to DSP recipients, TPI pensioners, and the veteran community at large would be a good start.

A complaint to the Press Council would also be appropriate.

One of the major barriers to emplyment of people with disabilities is public attitude.

Image what this type of report does to that.