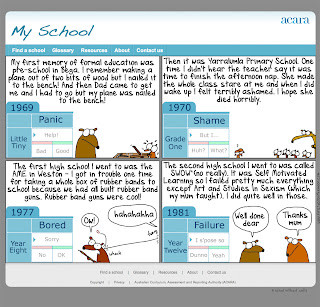 (Pic courtesy Crikey).
Recent additions to the Myschool website have provided new data which restates the bleeding obvious.
For example – the fact that there is no clear connection between the amount of money a school spends per student and learning outcomes.
It also shows that subsidised* schools spend a lot more on buildings and infrastructure than state schools. After working across both sectors for years, I didn’t need a website to tell me this.
This phenomenon (keeping up appearances) is not so obvious in many of the small Catholic (Parish) schools I’m familiar with, but once a school has (for example) the term “grammar” in its title, it is consistent.
I’d like a dollar for every conversation I’ve had with support teachers in top-end subsidised schools (when they employ them – STs that is) about spending a few dollars on staff training or recruitment to develop programmes for kids with special needs. No matter how often I make a formal recommendation about this, spending any money on these initiatives remains at the bottom of the priority list.
They’d much rather put up a new (and expensive) administration block, in order to make a good impression on parents of prospective enrolees.
Turn up at one of these schools as a prospective enrolee with a child with disabilities, and they’re less interested in impressing you. You’ll get short shrift usually couched in the words – “Sorry, we don’t cater for”-  (insert the appropriate label from the following - intellectual impairment, autism, Down Syndrome…..etc).
How about a new data point on Myschool – the percentage of students with disabilities enrolled in the specific school compared with national disability incidence rates?
Now that would be interesting…………….
* I won't use the term "private". These schools are heavily taxpayer subsidised.
at March 05, 2011 1 comment: 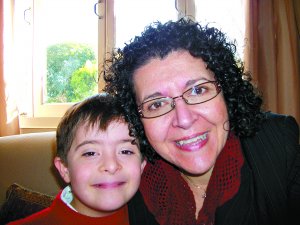