Those of you not living in Queensland may not have heard of the LNP government's push for asset sales.

A very expensive PR campaign seems not to have convinced Queensland voters that it is the way to go.

Like many other locals, I completed the "Strong Choices" survey, and despite its architecture, which was designed to produce asset sales as the best outcome, I had little trouble in fixing the deficit without resorting to the favoured strategy.

Unfortunately for the government, the survey did not produce the required result.

Which brings me to the images posted here.

The first one compares energy tariffs in the states on the basis of privatised and state owned utilities.

The second one examines consumer complaints related to when the privatisation occurred.

These pictures tell a thousand words.

For me, bottom line is, along with millions of other Queenslanders, I take a dim view of someone selling my property, and then allowing the new owners to rip me off in favour of their shareholders.

And for those of you interested in data rather than anecdote, here is an abstract from a British study* into costs and benefits of privitisation -

We report a social cost-benefit analysis of the privatisation and restructuring of the Central Electricity Generating Board which generated and transmitted all public electricity in England and Wales until 1990. The main benefits came from generator efficiency gains, switching from nuclear power, and lower emissions. The main costs came from higher prices for imported French electricity, the cost of restructuring and premature investment in the gas-fired generating plant. Our central estimate is a permanent cost reduction of 5% per year, equivalent to an extra 40% return on assets. Consumers and government lose, and producers gain more than the cost reduction.

* The Journal of Industrial Economics

From the Other Side

Oliver is a comedian, so the show is tongue-in-cheek. 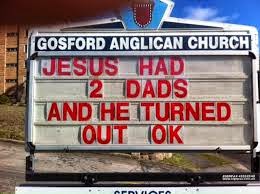 The Priest at Gosford Anglican Church has a dab hand with signage.

Here are a few examples. 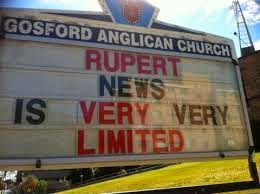 More power to his elbow. 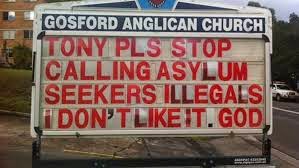 There aren't too many real Christians about, and none in federal politics. 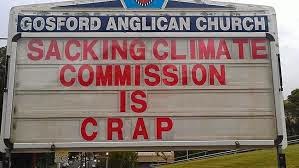 These signs make that state of affairs abundantly clear. 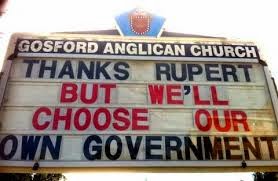