I’ve been banned from Andrew Bolt’s website more often than I’ve had hot dinners, but either “banning” is temporary or he doesn’t have the resources to actually keep a record of those banned.
Given the drivel he posts, it would be a very long list.
Every now and again I get posted, and am usually abused roundly by his acolytes who obviously inhabit the feral end of the political spectrum. For these lost souls, Andrew says “jump” and you know the rest. Other references to the pre-ordering of excremental colour will be well understood by ex-soldiers.
It is amusing, and helps to pass the time.
Sometimes, some brave soul has a go at him, and occasionally – just occasionally, he responds. These responses are always shouty (bold) and often border on the apoplectic.
He doesn’t take well to disagreement – does our Andrew. His appearances on “Insiders” are characterized by the curling of the lip, aggressive body language, and frequent put-downs of the other panel members.
For your amusement see below. This is a sequential extract from a response by a brave soul called Naomi on one of Bolt’s (or is it Blot’s) rants about the stolen generation.
I’ve also included my post – which of course was snipped – but there’s a screen shot. Click on the image to enlarge.
The funniest part is how his spelling and grammar degenerates in the face of debate or disagreement. Or maybe the timing was significant. It was Saturday, and the typos could have had post-prandial origins.
Anyway – here it is. You won’t see it anywhere else.

Noami’s post –
The suggestion that no child was taken from a family who loved and wanted to protect him or her is an absolute denial of reality.
The only fraud I can see is that fact that you are called a journalist. I looked through a few of your previous columns where you have focused on Manne’s refusal to name ten names off the bat as an indication that ten children were not taken primarily because they were Aboriginal.
That he returned to you with some 250 names apparently was not considered. Instead, you appealed for help establishing that 12 of those cases were cases of neglect. Manne did not “fail” to answer you. He gave you a considered response which you basically ignored.
This is only one instance of your inability to engage in a discussion about the Stolen Generation in an informed and considered way. Your refusal to engage with the evidence before you on a meaningful level is not only blinding you to the fact of what occurred, but is patronising to your readers.
Just another thing - the idea that the “myth” of the Stolen Generation has left Child Protection workers reluctant to take away Aboriginal children away for legitimate reasons does not sit well with the fact that Aboriginal children in Victoria at 13.5 times as likely to be in out-of-home care if they come to the attention of Child Protection [Australian Institute of Health and Welfare, January 2010, p 46]
If I had the slightest inkling that you would actually like to engage in this debate, without childish arguments or a desire to actually debate, it would be worthwhile to systematically demonstrate every point at which you can be contradicted with evidence.
Naomi (Reply)
Sat 30 Jan 10 (01:54pm)

Bolt’s shouty reply – (Note the spelling/typos) -
Your first sentence is completely false. I say and suggest no such thing. Your second is just silly abuse. Your fourth is false - I’ve dealt with that several times, pointing out the list comprises children deemed by a court to have been neglected, children who’d been found sexually abused or suffering from sexually trams,itted diseases, and children who’d actually been evacuated (often with their parents) from the Northern Territory during the World War Two air attacks by Japan and had been later returned. Your fifth and sixth sentences are false, as are mopst of the rest. (In fact, I’ve quoted instances where children were left in dangerous - and somethings lethal - danger specifically because of fears of repeating the “stolen generation. The cases include the notorious one of a raped girl at Aurukun removed from her white foster parents by social workers citing the “stolen generations” and returned to her town, where she was pack-raped again.)
Please do me the courtesty, and truth the respect, of checking my claims before immediately assuming they are false.
If you really think Manne has provided as many as 250 of the names of children stolen just because they were black, please just give me just 10 of the names you think best contradict me. Just 10.
If you cannot, will you return and apologise?
Andrew Bolt
Sat 30 Jan 10 (03:34pm)

Naomi
Not only does Bolt demonstrate an inability to engage in debate on this issue - he censors anyone who disagrees with him, with a few exceptions (such as yours), which provide him with an opportunity to vilify.
The "Show me 10" argument is a complete red herring, as he knows that publicly naming anyone removed is legally perilous.
The scary part is that given the fact that he often loses it (in terms of spelling or keyboarding)
- trams,itted
do me the courtesty
somethings dangerous
these responses are obviously the product of indignant anger.
How dare anyone disagree with Andrew?
Cour-testy indeed!

I posted another comment - see screen shot (censored of course). Naomi may enjoy it if she reads it. Meanwhile my post has attracted a vaguely piratical comment from someone called whitlam (lower case). Not censored - of course.

If you can't be bothered enlarging the screen shot, my comment reads -
Naomi
This won't of course be posted, but I can capture the screen shot for my blog - where it will be. I admire your courage, just as I deplore Bolt's cowardice and reluctance to engage on this issue. This person wouldn't recognise journalism if it jumped up and bit him on the bum.
And he still hasn't fixed his typos.
It must have been a long lunch.....
at January 30, 2010 6 comments: 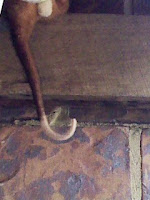 If any Brisbane readers are interested or know anyone who might be, email me on 1735099@gmail.com and I’ll relay details to son.
at January 30, 2010 No comments:

wonder when we will be mature enough to have our own national flag – a flag that doesn’t symbolically kowtow to another country?

We are, after all, one of very few counties in the world that appropriates someone else’s flag as part of its own.

In the case of the Commonwealth, a voluntary association of 54 independent sovereign states, besides Australia, only New Zealand and Fiji are still attached to the symbolic apron strings.

Fiji has the Union jack on its flag – but then Fiji was suspended from the Commonwealth on September 1st 2009, so maybe it doesn’t count.

The question needs to be asked. Why is the Union Jack on our flag? Sure, we were settled/colonised (use whichever term causes least offence) by the British. But that was over 220 years ago, and the world has changed a bit since then.

I doubt that the majority of Australians see the symbolism of the national flag as a high order issue. The only time it’s flown by Joe average is on Australia day, and often the way it’s done (wrapped around a boozy Bogan or stuck in the door frame of a ten year old Commodore on a Made in China marketing exercise) does no-one any credit.

My ancestors are Irish. They came over in the 1860s, driven from their native land by a combination of famine and British indifference. I feel no loyalty to anything or anyone from blighty.

I feel more affinity with the traditional Irish song Foggy Dew, about the Easter Rising of 1916. An extract –

“Oh the night fell black and the rifles' crack Made perfidious Albion reel".

Not much loyalty expressed there.

The English, after all, reneged on the Treaty of Limerick of 1691, which ended the war between the Catholic Jacobite forces and the English loyal to William of Orange. The terms of this treaty were relatively favorable to the Irish. Catholics were given freedom to worship, own property and carry arms.

The English went back on their word in the Penal Laws of 1695, and the Irish were treated as second class citizens for centuries.

Why would I feel any loyalty to them?


My preferred flag is on the title page of this blog. The Eureka flag represents an authentic proud and courageous response to tyranny.

It's good to see Ray Martin agreeing with me. Thanks Ray.

I’d rather resist than kowtow.
An

d then there’s the current dreary national anthem…… “Song of Australia” (tune of “Waltzing Matilda”) beats it hands down.