I took a run out to Esk the other day. At 77ks and an hour on the road, it's a neat distance that doesn't render the rest of the day unusable. The round trip back to Toowoomba is about 150km.
The road drops down the escarpment East of Hampton through some interesting and varied country via Ravensbourne National Park, and you can loop back via Gatton so that you don't have to traverse the same piece of road twice.
In Esk itself there's a fair choice of coffee outlets, and the township is interesting and usually busy, although not congested.
The sun was in and out all morning, but I elected to leave the top down, which was OK until the return journey when it started to rain. I discovered that provided you stayed above 80kph, the rain generally blows over the cabin. There wasn't much traffic, but there were a few trucks between Esk and the Gatton turnoff, mostly carrying gear associated with the pipeline from Wivenhoe Dam to Toowoomba. The Mazda is an absolute treat to drive on these roads. Best of all, you don't have to drive it fast to have a good time. With the top down, and after recent rain, the scrub was fragrant, and you could have closed your eyes and your nose would know what sort of country you were in. (I didn't of course – close my eyes that is – not a good idea at 100kph). 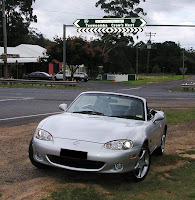 This country has some personal significance. My dad was head teacher at Hampton in 1942 when he enlisted in the RAAF. When he went off to New Guinea as an LAC fitting radios to Kittyhawks, my mum took over the school until his return in 1946. I was conceived there and arrived in 1947. You can still see the pine trees dad planted, but the school is long gone.

On the outskirts of town was a school house. I lived in three or four different versions of this house as my dad moved around as a country principal, so for reasons of nostalgia I had to photograph this particular example. In Esk itself there is a lot of activity around the pipeline project. There's a fair-sized cluster of demountables to the West of the township, and you can see the pipes stockpiled not far away. According to the local rag, the first 1000m of pipeline has been laid.
I don't know when it will be finished, but until it is, Toowoomba languishes on level five restrictions. It's been raining on and off since the beginning of Autumn, but all of it has dodged the dams feeding Toowoomba's supply. It's probably karma after the "no" vote in the recycling referendum a few years ago.
(Click on the pics to see a larger version).

I spent most of last week in Brisbane at a disabilities conference. Given that I've been working in this field since 1971, I guess there's always the risk that I'm getting jaded. If this was the case, this particular conference was a cure.
It also left me feeling both hopeful and nostalgic.
A very large proportion of the delegates were people with disabilities, and as a consequence, the venue, programme and content were developed with the principles of "Universal Design" well and truly in mind. This meant that accessing every aspect of the conference, from the presentations to the catering, rooms, toilets, documentation and speakers was simple and hassle-free.

This, in itself, was a revelation.
I was able, for example, to listen to the keynote speakers whilst at the same time watching a real-time text presentation, word-by-word, of the content of their addresses. This was achieved by a combination of software and human editing. The editors were shorthand users, who (almost instantaneously) edited any errors in the software-generated text as it appeared on the screen. This was done so quickly and seamlessly that it was almost undetectable. (See pic). The people involved needed to have shorthand ability as through this they had the skills necessary to edit a stream of text in real time. What this meant to someone like me, not a person with a disability, but with failing hearing as a consequence of damage (caused both by age and spending two months in 1970 cheek-by-jowl with Yank mobile artillery which fired regularly and routinely), was in a better position to accurately listen and respond to the material presented.

Given that the speakers included people like Bernard Salt, Kevin Cocks, Bill Shorten and Vinny Lauwers, this was worthwhile.
Bernard Salt is a demographer, Kevin Cocks an advocate, Bill Shorten the Parliamentary Secretary for Disabilities in the federal parliament, and Vinny Lauwers the first person with a disability to sail around the world, solo and unassisted.
Both Cocks and Lauwers have significant physical disabilities.
I was particularly impressed by Vinny Lauwers (his sense of humour, sheer guts and total honesty) and Bill Shorten (his obvious determination, and his no-nonsense and almost politics- free delivery). They are both, in different ways, inspiring speakers, and it was worth being there just to hear them.
The other interesting (if nostalgic) aspect for me was to encounter people with cerebral palsy I had taught at the State School for Spastic Children (New Farm) in 1971 – straight out of my RTA after Vietnam. Two of them are now doing great work as leaders in disability advocacy in Queensland.
The scary bit is that they are both in their early forties.
One other novel aspect of the conference was the roving cartoonist, who drew non-stop. His cartoons were posted daily. I've featured one which describes the work of the Make-a-Wish foundation, which sets out to make the most of the moment for kids with terminal illness. It shows a diver attaching fish to the line of such a kid so that he is guaranteed success in his wish – that is to catch fish off a boat at sea. It seems to me that lots of people working with kids with disabilities do this often. It's probably not a bad metaphor for their work. This is particularly the case for the hundreds of thousands of aging carers out there.

Perhaps Shorten's concept of a national disability insurance scheme holds out hope for these people and those they care for.
at April 07, 2009 2 comments: