Staying with the vintage/veteran motoring theme, I’m posting some shots that I took at Glenmorgan last week.

Click on the images to get a good look.

Glenmorgan isn’t really on the way to anywhere in particular, but it can be an interesting destination in itself. A local bloke with the time and resources necessary has set up a museum to things automotive on the road through the township.

It features vehicles from the forties (mostly military) through to the early sixties. What makes it unique is that they are presented as if they’re on sale in a used car lot. 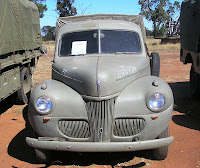 The Ford V8 Ute shown was one of a batch that was requisitioned. They were sedans when taken over by the military, but were smartly converted to Utes. The one displayed was used in and . I remember my dad who served in the RAAF in talking about these Utes. He was mightily impressed.

rs or so when you look at the display. It’s also completely surprising, as there is nothing to suggest that it’s there until you turn the corner into the township.

There never seems to be anyone about – it reminds me of in that sense.

I’m usually on my way to , itself an interesting spot.

Cars and Planes and Stuff

This is always a good day, but this year was amazing, despite GFC, AGW and SFP*.

I took the Mazda along to display it. It’s not vintage, but in my book is a classic. Any machine that’s depreciating more slowly than my Super, is by my definition, a classic.

Besides, you get in for less if you display, and it’s not a bad excuse to sit in the sun, read the papers and talk cars and aeroplanes.

I was surprised at the interest shown in the MX5, although not a lot of it was well-informed. One Gen Y character asked me if it handled well because of the “front wheel drive”, and was more than a little surprised when I pointed out that front engine – rear drive was the configuration.

The variety of machinery displayed was the best I’ve seen anywhere with the possible exception of Birdwood (SA), but there weren’t any aircraft at Birdwood.

Aircraft on display were a range of warbirds including Trojans, a Winjeel, and a number (don’t know the collective noun) of Yaks. Here was a wooden DH Dragon Rapide and there some Tiger Moths. The Aerotec hangar had its usual fantastic display including Guido Zuccoli's Fiat G-59-4B.

The dapper-looking chappie who flew the Winjeel up from Point Cook wasn’t persuaded that this breed of aircraft was used in the artillery spotting role until 1975.

I know it was. This is because the skipper (platoon commander) flew in one doing exactly that when we were training for tropical warfare in the sleet and mist in the Putty area in 1969. As I recall, the aircraft at that time was based at Williamtown. It’s not wonderful in that role, despite being very robust. The low wing and lack of agility don’t help.

I didn’t bother arguing. He came across as a bit like a number of bloggers (usually sharply inclined to the right) who derive their understanding of recent history from doubtful written sources, and place more trust in them than a primary source who has actually lived the real experience. 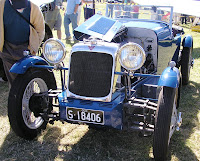 There was a contingent of Alvis owners, some from the UK, who had flown their cars across. Beautifully crafted cars – and their owners can’t be short of a quid. Maybe the UK isn’t in such a mess after all. The one in the photo has front wheel drive – a rarity in those days, although they didn’t persist with it.

A light tank was displayed that I can't identify. Any ideas? 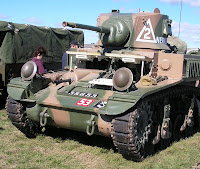 I also found a 1967 HR Holden. Unremarkable? Perhaps, but I owned one exactly the same colour from 1971 until 1973.
I bought it from my Dad when I got back from Vietnam, and drove it everywhere (including one epic journey from Brisbane to Darwin and Alice Springs in 1972). It never missed a beat.

You could also buy a decent coffee if you were prepared to queue, and the loos were clean. Catering at events like these has come a long way in the last ten years.

Next year I’ll try to talk the MX5 club into a group display. Maybe we can conjure up some sponsorship from the local Mazda distributor.
at May 10, 2009 5 comments: