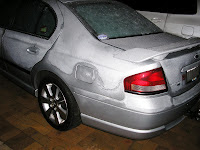 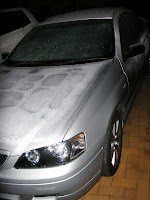 Our leg today was from Dubbo to Balranald, not as far as yesterday’s journey, but full of variety.

It started with ice in Dubbo. Our host told me that this was the biggest frost so far this year, so as usual my timing was impeccable. There was a layer over much of the car, and a good covering on all the grass. Unlocking the trailer and hitching up in these conditions was not much fun.

Whilst I was checking out, a deputation of middle-aged women in their dressing gowns descended on the office, explaining in direct and specific terms that there was no hot water in the ablutions block. The proprietor was a wise man, and remained behind the counter whilst explaining that there was a backup set of showers in an adjacent building.

They were not happy campers, and set out to find the substitute showers with steam emanating from their ears. I left before they returned, unwilling to be a witness to a possible homicide.

Once on the road, I noticed that the real time read-out on the fuel consumption was delivering some alarming figures. I stopped to investigate, and discovered that in my haste to get back into the warm (car), I had allowed the park lock on the trailer to fall into the “on” position. The trailer brakes were dragging, and as well as increasing the fuel consumption, were heating up the hubs and axle more than somewhat. Once the lock was returned to the correct position, things settled back to normal.

The availability of lpg continues to be good (on the Newell, Midwestern and Sturt highways), and prices consistently remained half that of unleaded. The roads are great, and traffic generally light. The only hassle was a lack of EFTPOS at Hay and Balranald. Apparently there is a line out somewhere.

I’ve not ventured through this part of the world before, and enjoyed the beauty of the landscape particularly between Dubbo and Parkes. As we headed south and west, the characteristic colours and shapes of marginal saltbush country appeared, reminding me of the country between Longreach and

Tomorrow is the last leg to . It will be good to do something else other than driving for a change. I’d like to do this trip in a more leisurely fashion. 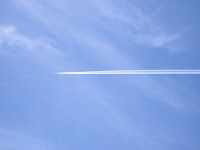 Today we drove from Toowoomba to Dubbo. This was the longest section (over 700km), but it took a comfortable nine and a half hours including breaks every two hours, and a decent pause for lunch (at Narrabri).

The rig performed well, although fuel consumption was a bit high (17lit/100km). Having said this, running on lpg meant that virtual fuel consumption was half that, as unleaded was consistently twice the price. The most expensive lpg was 87.9 (Narrabri) and the cheapest 78.9 (Goondiwindi). A consumption of 8.5lit/100km whilst towing over a tonne is not to be sneezed at. We used no unleaded at all, with gas available all along the route.

The car pulled well and time in the passing lane was easily kept to a minimum. There was no sign of vehicular stress with coolant temperatures exactly the same as when not towing. There’s no doubt that the big Aussie sedan is a very suitable vehicle for this type of journey, with a great capacity to eat distance quietly and comfortably.

The country improved the farther south we traveled, and looks particularly attractive at the moment between Gilgandra and Dubbo. It was not so good to the north of this area, with a characteristic dead grey appearance.

It’s cold in the morning and evening, but very pleasant in the car with the sun shining. The fine weather looks like continuing for a few days at least. The ABC coverage is great – we could listen to Triple J all the way. This is a concession to my son – it’s not my usual fare.

To me this sound track was more than a little incongruous for this part of the world. There was lots of Rap – good music for the war in apparently.

Tomorrow morning at first light I set out to drive from Toowoomba to with my no. 2 son. The reason for undertaking this relative marathon is to help him get settled at Flinders, a much easier proposition with a car (and trailer) than with a pushbike – his sole means of transport.

Both of us have seen Vietnamese people carry all manner of appliances around on pushbikes when we visited there year before last, but this method of conveyance loses in the translation south.

I bought a new (locally-built) tradies trailer, which can be locked, and is large enough to take his worldly possessions – mostly books and CDs – without pulling the proverbial out of the vehicle, a BA Falcon with LPG conversion. This afternoon I spent $92 ($75 unleaded plus $17 LPG) topping up on fuel. This gives a theoretical range of 1100km, which is more than we need in the unlikely event that LPG supplies aren’t available en route. In theory they are, but it will be interesting to see what the prices are. Hopefully, we can avoid unleaded altogether, given the astronomical costs in more remote locations.

Not that we’ll be anywhere too remote – day one is Dubbo, day two Balranald, and we should arrive at the city of on Sunday evening. The whole idea of travelling south-west at this time of the year is counter-intuitive, but my kids have never been all that conventional. Total distance is 1900km, and temperatures along the way are between zero and fifteen. Thankfully, the recent westerly seems to be on the wane.

When this marathon is over, the trailer will be useful in (over time) disposing of twenty years of accumulated gear that gathers around children at their various stages of development. As they’ve left one at a time, they’ve left their gear behind, and apparently lost all interest in it. There will be garage sales!

The intention is to submit a report at the end of each day using my Telstra blue tick country phone linked to my laptop. If no report appears – blame Telstra.

It's apparent that the Americans made a request to Australian authorities to test sarin gas in North Queensland in 1962. They wanted to test the results on "jungle foliage" and "personnel traversing". This jungle was in an area near Lockhart River, and the "personnel" were to be diggers, not GIs.

Harold Holt had the backbone to say "no". His reaction to getting the request must have been interesting.

The testing was vetoed by then prime minister Harold Holt in 1966. Holt's former staffer Peter Bailey told Channel Nine the nerve gas plan had been considered by the Australian government and ministers were concerned that scuttling it could damage Canberra's relationship with the US. He said the ministers felt "if they weren't pretty good and pretty faithful to the Americans we would be dumped," he said.

With allies like these, it's a wonder we survived the last fifty years - although there are plenty of Vietnam Vets living the consequences of indiscriminate spraying of chemicals.

This historical thread of Australian service personnel being considered expendable by foreign regimes is woven through our national narrative. It can be seen as far back as the Boer war, and was at its height during the first world war.

Then there was Churchill's tendency to see Aussies as cannon fodder to protect British interests in Burma, rather than allowing them to return home to protect their homeland in the face of an invasion threat from the Japanese.

John Curtin and Harold Holt have something in common.