Tomorrow I head back to , but today (in between visits to Flinders Uni bookstore and an Electronic shop in Brighton to pick up enough patch cord to connect one side of to the other) I was able to wander along Walkerville Terrace and take some photos.

(The stonework characterising houses is not wireless internet friendly. We don’t have these hassles in wooden old Queenslanders – the preferred habitat of Uni students in ).

I could learn to love this city. Last time I was here was in temperatures over forty degrees. The light and heat reminded me of where I lived in the nineties. This trip, the skies are soft, there is a low pressure system delivering light showers interspersed with bursts of sunshine. The contrast is amazing.

The people are well rugged-up. They actually dress for winter – something that doesn’t happen in because the season doesn’t last long enough to warrant a winter wardrobe. People smile as you pass them in the street – a young woman on a bike on Walkerville Terrace gave me a grin worth the 1800km drive. Maybe I look quaint enough to generate these reactions. A grey-haired sunburnt Queenslander probably looks out of place.

We visited Flinders yesterday and today. Each time it poured rain whilst we were on campus. I think it generates its own unique weather different from the rest of . 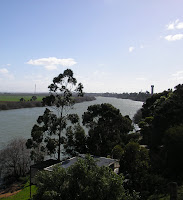 We’ve arrived in , and son no. 2 is already installed in his new digs.

Tomorrow is about getting oriented and Uni booklists. The rest of today is about recovery from three days of driving.

Driving distances like these reminds me of the reality of time and distance in this country. I’m also inclined to believe that journeys such as these will become relatively rare in the future. The cost of fuel is a factor, but the willingness of the Millennials to drive these distances is not as commonplace it is for my generation. They generally find driving through the countryside pretty boring. I find it engaging – but I’m a baby boomer brought up in a family culture of epic journeys.

On this final day, we found the roads quiet, and mostly well-engineered. I’m very impressed by the freeway leading into from the East. It has to be one of the most spectacular roads in the country.

I’m also impressed by the performance of the car, which lugged about a tonne of gear halfway
across the country in a very fuss-free manner. It used lots of lpg, but still was much cheaper to drive such distances than a conventional vehicle. I’m not sure if the ready availability of this fuel is a feature of roads further west, but there were no problems on the route we followed.

The other interesting feature of this journey was the capacity of my bush phone to act as a modem allowing me to blog from anywhere I had reception. It is, however, pretty expensive.