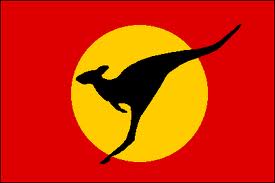 Australia Day always brings with it the annual debate about the flag and the republic.
Quite frankly I don't understand why there is any need for a debate.
Adopting a new flag and moving to a republic are simply inevitable milestones along the road of our growth as a nation. Change, after all, is a fact of life.
Any study of either the science of biology or social anthropology makes this abundantly clear. A central organizing concept in biology is that life changes and develops through evolution. The only organism that doesn't change is dead.
So even if you ignore the fact that these two symbols of national life are inappropriate, they will change as a matter of national development in any case.
Putting this inevitability aside for a moment, there are other very good reasons for change.
Let's look at the flag. It has, of course, the flag of the colonial power superimposed. This is simply an anachronism.
If it were not so, the flag of the , and would still have the Union flag in the corner. I'd wager you'd find very few Yanks, Canucks or Indians who would tolerate this. Yet we continue to do so. Are we less proud and independent than these other nations?
As for the need to have a non-Catholic English man or woman as our "sovereign" - that is so bizarre that it beggars description. Imagine trying to explain the rationale for this to an extra-terrestrial.
My ancestors came to this country in the 1860s as displaced people through English colonial policy in . The English have no place of honour in my heritage - just the opposite.
Yet we continue to have to put up with the nostalgic bleatings of the conservatives who fear the future instead of working towards building it.
This will change - I hope I live to see it.