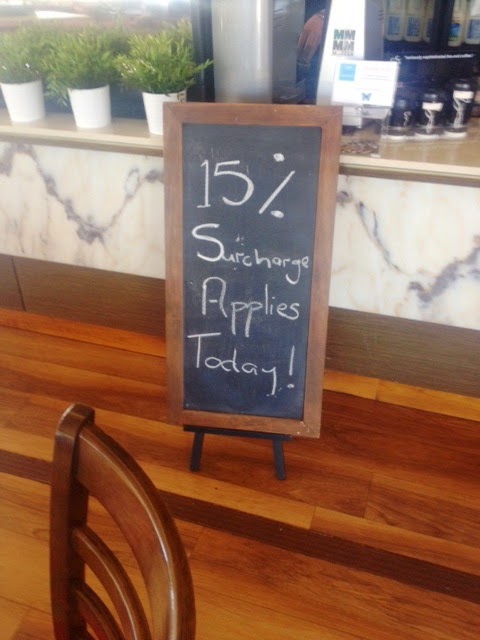 We have an Aromas franchise just up the road.

Occasionally we wander in for breakfast.

They do a great omelette with all the trimmings for about $17.

Today, of course, was a public holiday, which would attract penalty rates for staff. That was the reason for the 15% surcharge.

The place was buzzing - very few tables available. Most customers were of our vintage, but there were a few Gen Ys present.

Obviously the surcharge hadn't scared them off. It added about $2.50 to our bill. Like everybody else there, we were happy to pay it.

The staff were gainfully employed, the business is doing well. and the customers were voting with their feet.

It puts the lie to the current ideological push for the abolition of penalty rates.

Watch the roo commit hari-kari at about 5 seconds in. You'll probably have to go full screen to see it properly.

We were about 20 kms West of Charleville on the Diamantina Development Road Eastbound.

The driver (not me at the time) didn't have a chance to avoid - not even time to brake.
We've had it drummed into us not to swerve.


The damage to the car was cosmetic - a crack in the plastic bumper, and ironically, the Shu-Ru was damaged, as it hit the roo before the bumper. As you can see, it finished up folded under the number plate.

The Shu-Ru is almost invisible in the pic.

Dunno if it still worked after the roo strike, but given it apparently failed to do what it was supposed to do in the first place, it probably made no difference.

Unfortunately, the damage to the roo wasn't enough to kill it. I had to dispatch it with a piece of hardwood I found by the side of the road.

That makes four macropods I've cleaned up since 2007.