Masters of the Universe

Back in the late nineties, when my two sons were still at school, I took them on a road trip south to Sydney. There were a couple of reasons for this. I had taken some long service leave, recently purchased a funny French car (Peugeot 505 wagon) which I wanted to drive. I also hoped to connect, after many decades, with some of my rifle platoon mates.

It was a great trip, and we had many adventures of the fairly humdrum kind. I think the boys enjoyed it, as it still comes up for mention from time to time. I met up with a couple of old mates, and had a drink and told a lie or two.

We spent about a week in Sydney, staying at a basic holiday park and commuting daily into the city. We were fascinated (and generally impressed) by the diversity of the populace. This diversity is not a feature of Toowoomba, although since USQ started aggressively selling its wares overseas, it has begun to change.

One of the areas of Sydney we found interesting was the financial district. We kept going back to gawk at the strange specimens of both genders, on display at some of the swank coffee houses in this area. The most interesting activity was simply listening to the conversations. It was worth paying the exorbitant prices simply to buy a coffee to sit and listen.

I hadn't heard such a vacuous lot of prattle in a long time, nor seen such a collection of up-themselves ponces. My old man would have used the term "mug lairs". (It's a pity it's gone from common usage). If we hadn't seen it, we wouldn't have believed it.

I was reminded of Banjo Paterson's "Man from Ironbark" -

It was the man from Ironbark, who struck the Sydney town,
He wandered over street and park, he wandered up and down.
He loitered here; he loitered there, till he was like to drop,
Until at last in sheer despair he sought a barber's shop.

There were some gilded youths that sat along the barber's wall.
Their eyes were dull, their heads were flat, and they had no brains at all;

I remember sharing the thought with my sons that if these people had their hands on the financial pulse of the country we were in deep trouble. Given what's gone down in the last twelve months, I was probably right. I guess this holds for Wall Street. They're all the same breed.

Given the kafuffle about Citicorp's planned purchase of a corporate jet using bailout funds, it would seem likely. And these idiots are regarded as "Masters of the Universe"?

I'd like to drag one or two of them to Quilpie or Cunnamulla, give them a cut lunch and a bottle of water, and suggest they walk to Sydney thinking about their net worth to the nation on the way.
at January 31, 2009 2 comments:

Pork or Beef with Onions Cucumbers and Tomatoes

On my last trip to Vietnam I bought this (very basic) recipe book in Danang. I'll post recipes now and again - not necessarily from this book - more often those that work and are simple. They'll all be Vietnamese. I would never consider anything else.

I always cook Vietnamese on Saturday.

This one is simple, and good tucker -

The National day has started well.

One of my daughters is dropping advertising material (you're not allowed to call it "Junk Mail") in letterboxes, and I volunteered to do a block or two as it synchronized well with my morning walk.

This meant that I was able to amble along in the pleasant morning, enjoying the freshness after last night's storms, and listening to the music from festivities at Picnic Point.

There's no way in the world I'd ever participate willingly in these carryings-on, as it's not my generation's style, and is something that's developed, along with a fair whack of commercialism of the theme, in the last decade.

Other less attractive behaviours (in sport - exulting when a goal is scored; socially - getting drunk and waving the flag; and in some parts of our fair land, beating up minorities) have also marred the day recently. A new faux patriotism has developed which I find pretty disgraceful, and very boring.

The cliché "Patriotism is the last refuge of the scoundrel" has never been as relevant as it is in 2009.

The theme is also being commercially exploited to the absolute limit – not necessarily a new development, but one that is being managed with increased sophistication by the corporations. The nifty little flags being hocked everywhere, and ending up on the cars of every second bogan are a good example. 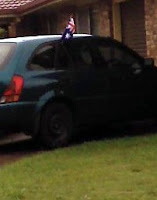 On the topic of flags – I've never been particularly enamored of our national symbol, although many years ago I fought under it and I always display the flag as a badge when traveling overseas, manly so I won't be mistaken for a Yank or Pom.

A flag which has the national symbol of another country in its top left corner is, to my mind, a statement of a cultural cringe that we outgrew a long time ago. How can we claim to be proud of our country when we display another's flag on our own? Besides, my ancestors were driven from their native land by this same empire.

Here are some alternatives, although neither is aesthetically pleasing. They are however, representative to a greater degree of my idea of our national identity. Maybe it's time for a flag competition – or maybe it could be combined with another referendum on the republic question – hopefully with bi-partisan support.


To me, the extent to which we are a nation of individuals, even eccentrics, the extent to which we can disagree and remain cohesive, the level of compassion shown to those aging and with disabilities, and the time we give to our children are far better measures of our nation than the amount of flag waving and boozing that occurs on this important day.

I've always favoured the Eureka flag. It symbolises action taken by a group of free men in an attempt to subvert the petty tyranny imposed on them. Futile - maybe, but so was Gallipoli, and Vietnam.

That's why it's on my blog.