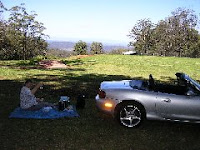 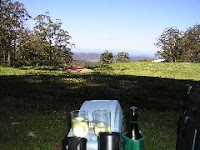 It's Christmas, and time for all sorts of simple pleasures. Our kids are all at home. I know this because the internet is slow, (the result of competition for bandwith), the fridge is chockas, and the dog barks at night from the garage because she thinks that she should inside like everyone else.

They're growing up. One clear sign is that the elder two (both male) have developed a preference for specific alcoholic beverages. (Guinness and Lager respectively - would you believe). My suggestion that they mix them to make Black and Tans was not greeted with any enthusiasm. Eldest daughter scorns alcohol, so put in an order for Lemon, Lime and Bitters. I got it wrong because I bought the diet variety. When I was her age, life was simpler and there was no possible confusion about diet varieties because they didn't exist. Youngest daughter is on a health kick (thinking about it, she's always on a health kick) and drinks water only. H likes anything that fizzes – that's how she finished up with me. I've used the Christmas excuse to stock up on a selection of Shiraz (plural?).

When it all got a bit crowded the other day (32 squares doesn't seem enough when they're all home) H and I went on a picnic. We drove the MX5 to a spot near Hampton, of special significance to me because it's near a grove of pine trees planted by my Dad before he went off to New Guinea in 1943.

It was cool shady, and quiet, and it was great to simply sit on the soft grass and enjoy the view. One glass of plonk (I was driving) helped with the ambience. I guess we could have walked 200 metres from home and found a spot equally as pleasant, but it wouldn't have been near my old man's trees. That's my excuse, anyway.
at December 24, 2008 2 comments:

A boy, 13, allegedly told police he wanted to kill a police officer after he was arrested for menacing staff with knives at a Queensland high school. Police say that on December 8, the boy took two knives to the school, where he acted in a "threatening manner" towards staff.

One of the staff is said to have disarmed the boy, who is more than 180cm tall and called police.
No one was injured in the incident. Police charged the boy with going armed in public to cause fear and assault. Two days later, detectives interviewed the teen as part of a threat assessment and to investigate what had triggered the alleged incident. Police sources said the boy revealed he had taken the knives to school to lure a local police officer he had targeted, into a confrontation. The teen also allegedly told police he wanted to stab the officer in the neck.

The boy, who cannot be identified under Queensland juvenile laws, will face a children's court on January 28.
He has not been charged with threatening the officer and it was unclear as to why the boy wanted to kill him.
Police sources said the teen, who is in the care of his mother, had expressed delusions of being fictional criminals from television shows such as Underbelly. The police interview with the boy prompted them to contact mental health authorities to assess the teenager. This assessment concluded that the boy had an intellectual impairment and was not mentally ill.

Sources said the boy previously had been cautioned by police for street fighting and behavioural issues. An Education Queensland spokesman would not reveal further details of the boy's case, the name of the school and whether the boy was a student there. Queensland Police Union president Cameron Pope said it was important at-risk children didn't fall through the cracks of society. He said that when people, regardless of age, were identified as having extremely violent and irrational tendencies, society as a whole needed to ensure that they received the help they needed. Mr Pope's warning came after Victorian police shot dead 15-year-old Tyler Cassidy who threatened to kill three police officers.

A couple of things make it interesting –

One of the staff is said to have disarmed the boy, who is more than 180cm tall and called police.

This makes me wonder. One staff member (presumably a teacher) disarms a 180cm tall male carrying a knife.

Compare this action and its outcome with the Tyler Cassidy situation. Obviously, comparisons on the basis of a media report (particularly from a Sunday tabloid) are dodgy, but it does remind me that kids coming to school with knives and being disarmed by their teachers is unfortunately not unusual. I've been guilty of the disarming bit in my teaching days, but usually the knife (or other offensive piece of kit) was removed from what we call the school "port" in Queensland before break time. Apparently it's technically illegal to go through a student's kit without his/her consent, and I'm afraid I've been technically guilty of this.

This assessment concluded that the boy had an intellectual impairment and was not mentally ill.

This student had an intellectual impairment which suggests he was enrolled at a special education unit in whatever high school it was. It probably also goes some distance in explaining why he was disarmed without injury. Teachers in these situations are generally both patient and resourceful, and they have much more flexibility that those in regular classes.

How long will it be before we have scanners at the gates of high schools? The lead time on this will probably be about the same as it was for our police to start carrying firearms, following the US practice. It's interesting that beat cops in New Zealand and the UK still don't carry, preferring to have ready reaction squads with firearms available should the need arise.

I wonder what would have been the result had the police sent to apprehend Tyler Cassidy been unarmed.
at December 23, 2008 3 comments: