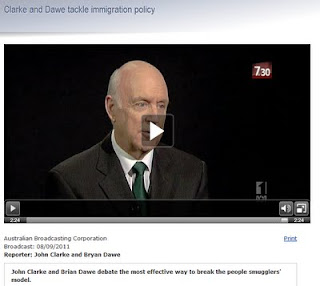 This send-up of the politics around asylum seekers is brilliant.

Apart from the fact that it's funny, it actually offers a tongue-in-cheek suggestion to solve the "problem" that in the cold light of day makes more sense than the wedging crap that both sides of politics have indulged in since wee Johnny used the refugees on the Tampa to help him retain power in 2001.

My ancestors arrived here in 1862 aboard the Erin-go-Bragh.
That was one of the boats referred to in the clip when Bryan Dawe is talking about the Irish poor.

We've gone backwards since then in our attitude towards refugees.

The video won't play on this page - you'll have to click on the link. Do yourself a favour and watch it. 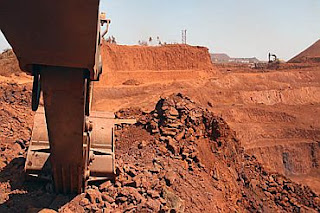 Driving back from Thargomindah via St George and Roma this week, I couldn’t help being reminded of the mining activity exploding in this part of the world.
Whether you notice the clapboard signs on most byroads or the state of the road which is slowly being destroyed by the oversize loads of mining infrastructure being moved from the coast, the marks are everywhere.
You can’t help but be reminded by some salient facts – one of them being that if you don’t book accommodation at least a month ahead, you’ll be squeezed out by the exploration companies and their block bookings.
Listening to a radio report of a study released by the Australia Institute piqued my curiosity, so I Googled it when I arrived home after a 2500km round trip.
It makes very interesting reading.
There are a range of assumptions held about the resources boom. Let’s have a look at the reality.
Assumption 1 - Many mines are owned by Australians and return profits to their Australian owners. Not so. In 2009 -10 mining profits amounted to $54 billion, of which 83% or $42 billion went overseas.
Assumption 2 – Mining is a strong employer of Australians. It depends what you mean by “strong”. In May 2011, 217,100 people were employed in the mining industry from a workforce of over 11 million. That makes mining one of the smallest employment sectors in the country, behind (for example) the Arts and Recreation Services sector.
Assumption 3 – Mining companies contribute large amounts of money to the wealth of the nation through taxes. Wrong. The average rate of corporate tax paid by the mining industry in 2008 – 2009 was 13.9%, well below the theoretical 30% tax rate, and a bloody site less than yours truly pays. One of the reasons for this is the generous tax deductions available to the mining industry. I’m not sure if the diesel fuel subsidy payable to miners is factored in to this calculation.
Assumption 4 – Mining provides positive spinoffs to other local industries. Not really. Mining drives up the exchange rate, and the costs of skilled labour for other sectors. It drives up the prices of raw materials used in construction as well as the services associated with the construction industry. Talk to those involved in trying to get the thousands of kilometres of flood damaged roads in Queensland repaired about the cost and availability of equipment and manpower hire in the middle of the mining boom. The supreme irony in this is that these same roads have been buggered by the miners using them in a flood damaged state.
Another fascinating aspect of this report is what it reveals about public perceptions of the mining industry. Take a look at the graph on page 8 of this report. It clearly shows that the community has swallowed a number of myths about the mining industry. Obviously, the propaganda (a great deal of which we are seeing on billboards up and down the Warrego) paid for by the big miners is working.
Quoting from the report –
“To sum up, Australians believe that the mining sector:
Employs nine times more workers than it actually does
Accounts for three times as much economic activity as it actually does
Is 30 per cent more Australian-owned than it actually is.”
There is also this neat summary of winners and losers –
“So who benefits and who loses?
Mining workers have of course experienced the direct effect of the mining boom as have some of the firms and their workers that have experienced the ripple effects of the mining boom.
Ordinary wage and salary earners have seen no boom in the rate of growth in their real wages.
Pensioners receive indexed pensions and, by definition, indexed payments do not increase in real terms so there is no extra benefit for pensioners. (The exception was the $30 a week increase in the 2009-10 budget as part of the government‘s response to the global financial crisis.)
Homeowners are forced to pay higher interest rates across the board as the Reserve Bank seeks to control overheating which is actually concentrated largely in the resource-intensive regions of Australia.
Superannuants with the median balance of those approaching retirement would be better off by around $2 a week, or 0.6 per cent of the age pension, as a result of the mining boom.
Workers in others sectors of the economy that are trade exposed, such as those working in manufacturing, tourism and education, are experiencing reductions in employment and less job security.
Foreign owners of resource stocks have seen their profits rise enormously and the capital value of their Australian investments increase as the exchange rate has risen.”
Identify which of these groups you belong to and figure out how much good the mining boom is doing you. It's not doing much for me, my family and my community. Roll on a Resource Super Profits Tax.
at September 09, 2011 1 comment: