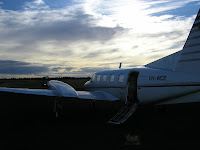 My recent charter flights have been a reminder of the role that air travel had in opening up western Queensland.

The country I’ve been frequenting is not so far from the birthplace of Qantas, and there is a museum at Quilpie airport dedicated to Amy Johnson who got lost and landed there when she was trying to find Charleville.

Those were the days when the homestead roofs had the property names painted large to assist wayward aviators. I think Amy turned right instead of left when she encountered the railway line – or was it the other way around?

These days, the navigational aids are a little more high-tech, but the basic romance of bush aviation remains. 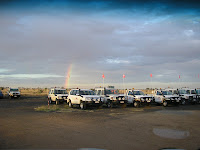 You always start early, as daylight is a finite resource, and the sunrises are always spectacular. On one of our flights we were treated to a rainbow on departure at Roma. I remembered the old rhyme “Rainbow at morning – shepherd’s warning” and worried about it all day.

Sure enough, on the flight back from Quilpie we hit a squally thunderstorm, and bounced all over the sky with the rain drumming on the fuselage. Unfortunately, it was on finals into Roma, so we couldn’t fly above it. This coupled with the fact that the sun had well and truly gone down as we approached the airport, made me a bit anxious. When you are looking through the same windscreen as the bloke with his hands and feet on the controls, and you realise how little he can actually see, it’s a little sobering.

The aircraft (a Piper Cheyenne Turbo) is pressurised and quite fast, but inside it’s poky and smells like a swamp. 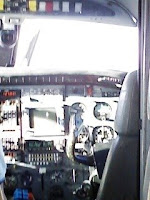 In fact the smell reminded me of a Thai Air Force C-123 Provider that flew me and a bunch of fifteenth intake Nashos from Nui Dat to Tan Son Nhut on 10th December 1970 to jump on the freedom bird for the flight back to Oz. The olfactory sense is the most impactful when it comes to memory.

I wonder whether the charter pilot would be mortally offended if I bring a can of freshener next trip?

Thinking of odours and aircraft reminds me of flying back from Shoalwater bay to Rockhampton in 1969 on board a Caribou after a fortnight spent chasing around playing warries in the tropical heat. We wore the same set of greens (no underwear) for the whole exercise during which there was no opportunity to bathe. The dapper-looking RAAF pilot took exception to the collective stink of thirty filthy grunts and opened the rear cargo hatch once airborne to improve the ventilation. It also improved the view…..

The Piper doesn’t have a cargo hatch – there’s only one entry door on the port side, and the driver has to clamber over the seated passengers once he’s shut this same hatch ensuring it’s properly locked.

Getting to the cockpit between the opulent front seats (the plane is an ex-executive aircraft) provides a particular challenge for anyone bulky of build. I’m skinny – so it’s not a hassle.

The advent of 9/11 has meant a surge in security at these bush airports. 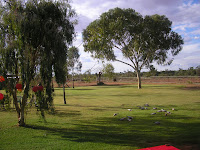 Access to the flightline is through coded gates, and the whole airport area is secured by 3 metre fencing topped by barbed wire. I guess they’re guarding against a hijacking of a small aircraft which in turn could be used to get to a secure area at a major airport.

By the way, if you examine the photo above you'll see a fine example of a balloon tree, found only west of Quilpie..... 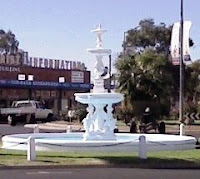 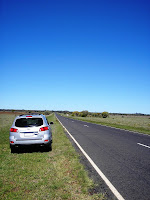 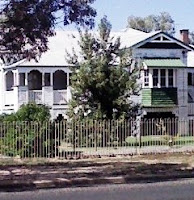