Blowin in the Wind 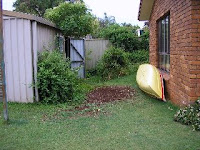 This was where my canoe was stored. 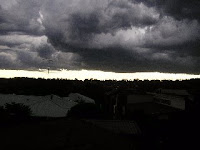 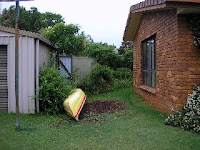 This is where it ended up.


I didn't discover it until this morning. Nature can be neat and tidy, but we've probably been a bit lucky. It could have taken a window pane or two, or redesigned a fence panel.
I used to store it inside hanging from the roof of the shed (left of picture) but MX5 and Qewpie (tradies trailer) live there now.
I'll have to get it out of the wind, given the storm season we're continuing to endure. In the meantime, anybody out there prepared to make an offer on a five metre Canadian complete with paddles and life jackets?
Posted by 1735099 at 16:05 0 comments 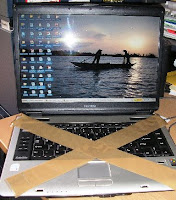 I've been having a good time during the last 24 hours commenting on Tim Blair's blog. You know the one – it's best known for a fairly narrow set of themes based loosely around lampooning the Labor government, anyone who isn't a climate change skeptic, and anyone that is grabbing sufficient attention to threaten Blair's (apparently fragile) ego.

I don't usually have the time for this, but it fitted in well with seeing the New Year in and waiting up for my kids as they returned, one-by-one, from various festivities. (I'll not miss this when we become empty-nesters in February).

In the course of a response to a Blair post lampooning an anti-Israel demonstration in New York, I've incurred the wrath of an individual called Nkomo, one of the moderators, and been censored.
My crime? I was told "hypocrisy", but I asked for more precision, it wasn't given. This means I'm not entirely sure, but it must have been one of the following –

Calling Blair a disgrace for lampooning an earnest (if dyslexic) demonstrator whilst ignoring the fact that hundreds of civilians (both Israeli and Palestinian) are being killed.

Leaving a blank space at the bottom of my comment for gratuitous abuse, but not actually writing anything there. (I'd been called everything from "moral midget", to "small, shrivelled soul").

After two years in the army, and forty years as a teacher, name-calling is a bit wasted on me.

Some people become very upset when you disagree with them.

Anyway, it will be interesting to see if the ban is permanent. It may not be a bad thing if it was - I'm wasting far too much time on this activity. 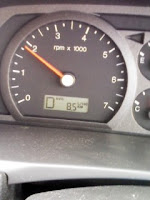 There's been lots of media attention recently about the Rudd government's announcements on the Australian motor industry.

Most of the heat generated has been about politics, rather than motoring.

As a petrol-head from way back I have a stake in the issue, and take a view as a driver, rather than a voter, although, of course, I'm both.

Most of my driving is long-distance, generally up and down the . I try, where possible, to avoid driving in the city and suburbs, because it's not fun, it's frustrating, and I'm highly suspicious of those I share the road with in Toowoomba, especially those who wear hats#.

I also need to drive a vehicle that can tow a reasonably sized trailer.

Consequently, my choice of vehicle is narrowed down to something that covers long distances comfortably and safely, can tow, and is cheap to run and reliable.

The government initiatives will result in smaller (medium-sized) cars, and towing with these vehicles is best avoided. I'd assume that cars of this size will be geared lower than large vehicles (by this I mean that the motor would be ticking over at 2500rpm at a 100kmh cruise, rather than the 1800 that my current (large) car uses. This relatively small difference has major implications for fuel economy when cruising.

In terms of long-distance cruising (remember, most of my driving) the traditional large Australian car is the logical option. My 2005 Falcon gets down to 8.5 l/100km in these conditions (see photo)*. Admittedly, I drive it with a gentle touch, but it has the power necessary to get me out of trouble, even when fully loaded (or towing, for that matter).

Coupled with the fact that it has a Sequential Vapour Injection LPG installation, providing greater efficiency than the Ford factory system in E-Gas versions of the Falcon, I enjoy very cheap long-distance motoring. Given that LPG costs slightly more than half unleaded, the virtual fuel consumption in these conditions approaches 5l/100km which is hybrid territory.

Admittedly, LPG is not much cleaner emissions-wise than unleaded, but there is a slight advantage.

This is a big country. Over the years, the local industry has developed a uniquely Australian genre of large vehicles which are a very good fit to purpose. Generally, they are safe, comfortable, and eat up long distance travel with ease. They also continue to perform well when fully-laden, something lacking in medium or small vehicles.

I'd like to see one of the manufacturers (Ford, perhaps) be provided with the financial support to develop a large car powered by alternative fuels such as CNG or LPG. There would also need to be an injection of funds to support the development of fuel distribution infrastructure for these alternatives. (One of the few disadvantages of LPG is that the price escalates rapidly as you head away from "civilisation").

I'd be surprised if there wasn't a market for this kind of vehicle, and the technology developed would have a wide application.

I have no idea whether Mao could drive, but I'm sure he would agree with me We need a variety of solutions.

*The photo was taken by my passenger – I don't get involved in any activity other than driving when I'm in the seat on the right hand side.

I was driving to the newsagent yesterday to get the paper – I usually walk, but it was Sunday.
There's got to be a day off.
As I turned into the carpark at the front of the shopping centre, I followed a twenty-year old BMW 5 series, with a flat rear tyre. The car looked like it came from the bush, with a well-crafted aluminium roo-bar. The driver emerged – a tall elderly bloke who had the appearance of an ex-grazier. (I can pick them a mile off, and there are many retired cockies living in our part of Toowoomba. I think they feel at home on the edge of the escarpment.)

I pointed out the tyre, which he hadn't noticed. He looked at a loss, and mumbled something about getting his son. It was apparent he wasn't up to changing the tyre himself. He also looked embarrassed – probably not a bloke who enjoyed needing help. I asked him if he had a spare, and offered to help when he said he did. Between us we began to change the tyre. He was able to help, but I don't know if he would have been able to do the job independently.

The BMW was well-equipped with a fold-down tool tray, and a very sophisticated jack. The car was obviously treasured, as all the kit was as original despite the fact that it was at least twenty years old. He told me that he was seventy years older than the car, which meant he was ninety. He said "I've slowed down a bit since I've turned ninety". I hope I'm as fit as he is at that age.

We chatted a bit as I changed the tyre. It turned out that he was a veteran of the Bougainville campaign in WW2, and that his son was in 5RAR on its first tour of Vietnam in 1967. He's also lost a brother in New Guinea, who had also served in the Middle East. He'd owned a property near Goondiwindi, so I was right about him being a cockie. I explained that I was a Vietnam veteran, and that my dad had also served in New Guinea. I'd also started teaching in Goondiwindi and been called up from there.

In fact, there were a lot of connections between us – mostly related to life experience and geography.

The BMW reminded me of the two Volkswagens I'd owned, in that the road wheels were attached using studs rather than bolts, and the detail engineering was top quality. In five minutes the job was done. We shook hands and drove away. It occurred to me that it took a sixty-year old to help a ninety year-old whilst heaps of younger bods walked on by.

They don't make them like that anymore – and the same applies to the old digger. I hope he enjoys many more days of happy motoring.