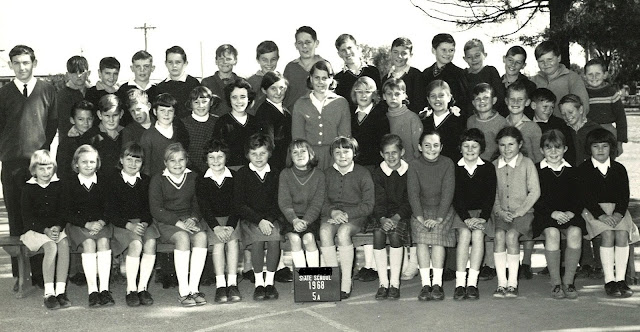 I had the interesting experience this week of working as a visiting consultant at the same school where I began my teaching career in 1968.

I didn't last very long in that posting - being shanghaied into the army in 1969 and eventually in 1970 - courtesy of the National Service Act.

Back then I had a class of 45 Year Fives (called Grade Five in those days) and despite the large class, I remember it fondly.

Last week I sat in on a school assembly at that same school. Some things were the same, compared to my recollections of the same activity in 1968, and some were different.

The Anthem was sung. In 1968 it was God Save the Queen. Now it's Advance Australia Fair. The Lord's Prayer was said. That was also part of the deal in 1968.

There were birthdays. A cohort of kids and one teacher who went up on stage and had their birthdays acknowledged. The teacher replied, when asked her age by the MC (the Deputy Principal) "Twenty-One". That hasn't changed - women lying about their age, I mean. We had similar birthday calls in 1968.

There was a "Thought for today" - an acknowledgement of the work done by the school cleaners and grounds people. In 1968 there was only one Groundsman. Now there are two, and the title is Janitor/Groundsperson.

Some things were different. There is now a school motto. There wasn't in 1968. It was recited with fervour - so much fervour in fact that I didn't understand the actual words. Maybe my lack of comprehension has more to do with encroaching deafness caused by the passage of time. It has been, after all, forty-seven years.

Another difference was the venue. Back in 1968, during assembly we stood out in the open, in summer in the blazing western sun; in winter, in the westerlies.

These days there is a beautifully built, completely accessible assembly hall and rows of comfy chairs. It was built with Labor's BER money, and will remain as a tribute to that much maligned policy, the political furore conveniently forgotten as generations of kids and communities benefit from the initiative.

Another glaring difference is the marked change in the gender balance of the staff. These days the principal is female, as are almost all the rest of the staff. The deputy is male, as is the PE teacher and one other class teacher, in a staff of about forty.

In 1968, half the staff was male, including the principal, who smoked a pipe at school. As a beginning teacher in 1968 I was on probation, and the principal would come into my classroom to observe my lessons, puffing on his pipe.

Eventually the pipe would go out and he'd put it on the window ledge, and forget it when he returned to his office. I would then have to designate one student to return the pipe. The kids hated its smell, and I quickly learnt to use the returning of the pipe as what can euphemistically be called a behaviour management strategy. It worked....

These days, nobody smokes.

The classes were about three times the size they are now, and there weren't any Teacher Aides. As a consequence, the slower kids fell behind, but it mattered little, as back then, there were plenty of jobs for kids who left school at fifteen.

The Curriculum content was much more limited, and we used work books which were absolutely explicit in what was taught and when. There was a major disconnect between teaching and learning. The first activity went on somewhat detached from the second - a little weird, looking back on it.

The kids are younger in this primary school with the absence of years seven and eight who are now in secondary.

And best of all, as a teacher of kids with disabilities, almost all of the school is wheelchair accessible.

There is even a ramp to the stage in the assembly hall!

Everything built with BER money had to comply with ABCB accessibility standards.

What hasn't changed is the wonderful atmosphere of the place - the "tone" - that illusive quality that marks a great school and is immediately obvious to a visitor.

There is no way this quality can be measured of course, so it escapes the ravages of NAPLAN.