Now that the dust has settled since last Saturday, commentators are busy drawing conclusions about the state of the national psyche, as revealed by the strong swing away from the Coalition.

Many read much more into the result than it merits – I guess it sells newspapers, but some conclusions can be made. Obviously, my take is based on my view of the world, but I’m also influenced by what I read, what I remember, and my work.

For the first time I can remember in Toowoomba, I had to queue to vote. The message from this is that whichever way people voted, they did it early, and with feeling. The only other time I have seen this phenomenon was in 1972 when I was voting in . Linked to the fact that this electorate (Groom – safe Liberal) showed a 10% swing, this meant that change was in the air.

Three of my children are old enough to vote. Of the two that live at home, one voted Green and the other Labor. The son who lives in Adelaide didn't tell me how he voted, but he lives in Kate Ellis' electorate and she was by far the best looking candidate, so I'm making a safe assumption. Whilst not very interested in politics, they all told me that climate change and HECs fees were important issues. In their situations – part time workers and students, it makes sense. Workchoices was also mentioned.

The teachers I work with seemed vehemently opposed to Coalition policy on education – particularly performance pay for teachers. Again, this makes sense. Whilst I don’t generally discuss politics with the parents of the disabled children I support, I’ve listened to enough conversations to know that federal policy on disability is held in low opinion – just as is state policy. These people are hurting so much that they take the proverbial baseball bat into the ballot box, and don’t distinguish state from federal.

Amongst all these factors, something else happened which is more difficult to interpret. It’s just possible that a large number of people are bringing moral considerations into their voting intentions. Issues such as treatment of refugees, the AWB scandal, indigenous apology and the war in backed up like a blocked sewer. On the other hand, the fear factor (whether it was based on national security or economic threats) doesn’t seem to have gained traction for the first time in a long time.

The electorate, at least this time, seems to have concluded that we don’t live on bread alone. 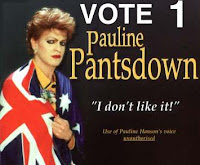 Apparently we've had a change of government. Generally, it's been accomplished with good humour, a lack of violence and a measure of civility - especially during the concession and acceptance speeches. There have been minor exceptions (see my last post).

We should never take for granted the fact that we live in a mature democracy.

Sorry about the pic - no particular significance - it just caught my eye. My own electorate (Groom) showed a 10.5% swing to the ALP. It's gone from being safe Coalition to being on the verge of marginal. There must have been a mood for change for this to happen in conservative Toowoomba.
at November 25, 2007 No comments: