This is my daughter’s small dog.
Her name is classified.
She was a birthday gift when our second daughter was eight. Daughter is now 19, so in dog years, the pup is now 77.
She doesn’t show it, still demonstrating as much energy and general feistiness as she did when she was younger.
She lives in solitary splendour now, as her long time companion (a Red Heeler) died of Lymphoma five years ago. They had a comfortable relationship. Occasionally, this one would make a nuisance of herself by prancing around the older dog in a play posture. He’d put up with this for a few minutes, and then would bark once, very loudly in her ear.
Mostly, she’d get the message and wander off to find a comfortable gonking spot.
As daughter is studying and working in the Big Smoke, my bride and I are now managed by the dog. She is very little trouble, although she has a strange habit of barking at the wind.
She has her uses. She found the rat in the car the other day, and takes me on a walk daily when I’m not out west working.
She is as dumb as a bag of hammers, but has shown us recently that she is still capable of learning new tricks.
My sister has a Blue Heeler, and we look after her when he and her hubby are holidaying. Last Month sister and hubby headed off to Paris for 60th Birthday celebrations (sister’s), so we looked after the Heeler.
The Heeler has a habit of rolling over to have her belly scratched. After watching this a few times, small dog took it up as a behaviour. It works every time.
She's trained us well.
at July 28, 2011 2 comments:

Wandering around Caloundra a few weeks ago was a pleasant exercise in nostalgia, but it also revealed a fitting way of honouring war service.
There is a picturesque walk running along the Caloundra Esplanade. From a point about halfway along this path, the Golden Beach RSL have instituted a memorial walkway.
Brass plaques describing the service of hundreds of soldiers, sailors and airmen are embedded in the pavement. I’ve seen something similar in the streets of Roma.
It’s an interesting way to commemorate service, in the sense that each plaque is separate and distinct. Traditional memorials provide a list, which to me is a little impersonal, although it’s obviously the most practical way of doing it.
My dad, like many other young Aussies of the time, enlisted in the RAAF shortly after the bombing of Darwin. He wanted to be posted to aircrew, but ended up as a radio fitter after it was discovered that he had sinuses completely unsuited to flying in unpressurised aircraft.
My parents had been married only a few years at the time, and they must have found the long separation (1942 – 1945) pretty difficult. Dad was posted to squadrons in Port Moresby and Lae and spent his war fitting and repairing radios in Kittyhawks and Beauforts.
Mum ran his small school whilst he was away, and as a married woman could only be a temporary employee. She was obliged to resign when dad came back.
Dad loved Caloundra enough to buy a house there in the sixties, and we spent some great times as a family using it as a weekender.
It struck me as fitting to have a plaque installed on the walkway, as the only other place at which Dad’s service is recognised is on his grave. He died in 1991.
My five siblings also think it’s a good idea.
at July 27, 2011 No comments: 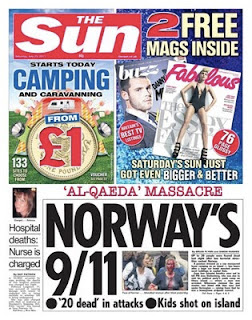 There are lots of good reasons to blog, I suppose.

Shedding some light on the operation of the "professional" media has to be one of them.

Reporting of the recent tragic events in Norway provides a very good example.

The image above of the front page of The Sun says it all.

About the only part that resembles the truth are the advertisements, although they're probably pretty dodgy. This nonsense went out on the streets of the UK where the punters were led to believe that Al Qaeda was behind the shootings and bombings.

This story was written by someone who presumably calls himself a "journalist".

You won't find any acknowledgement of the error on their website, by the way. Obviously, that would be embarrassing - best to simply ignore it.

The print media isn't alone when it comes to publishing nonsense. The following quote is from Blot's website -

Once the identity of the attackers becomes known, the consequences for Norway's immigration policies could be profound....

I guess this means that Norway will ban immigration of Freemasons, or perhaps Protestants.

It's beyond bizarre - yet these twits make a living out of writing it.

What we need is not an inquiry - but a college of journalism. When someone writes something so blatantly ridiculous, they could be struck off and have their licence to write copy revoked.

It works for doctors and lawyers.

But then, they're real professionals.