Jellybeans in the Jungle - Episode 5

Of Rocketships and Refrigeration 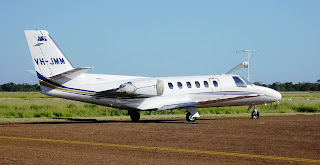 This week's work involved more flying, and to make it interesting we used a different aircraft.

Usually the charter company provides either a Piper Cheyenne Turbo or a Beechcraft Kingair. These are both capable and comfortable aircraft, but yesterday they used one of their Cessna Citations, a pure jet with a much higher performance.
This thing cruises at 400 knots and covered the distance between Roma and Cunnamulla in 45 minutes. It also handles the relatively short strips with ease. Stall happens at about 80 knots. The acceleration on takeoff feels much like that generated in a full sized jet. 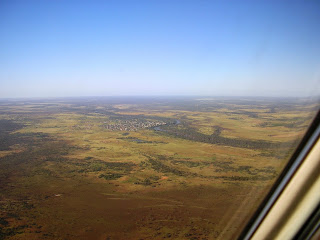 The weather was clear, and we had a great view of the recently-flooded countryside. Apart from hectares of water lying around, you could also see where it had been because of the discoloration of the countryside. Dead cattle were also evident.
The townships are just starting to get back to normal as the water recedes. I was talking to a freighting company owner in Cunnamulla who told me that yesterday (Friday) was the first day for three weeks that she’d been able to move anything anywhere. She was dealing with major bottlenecks all over the place from Thargomindah to Cunnamulla and west to Eromanga. Yes – this person was female. Bush women are often very effective business operators because they work on establishing relationships, and trust is everything out here.
But back to the aircraft. Apparently the reason for the deployment of the Citation was a combination of pilot training, and getting the thing to where it was needed (up north somewhere). 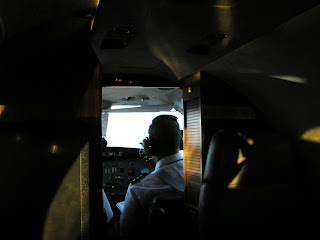 One of the pilots was telling me about a contract flying experience he’d had with a different charter company. They were contracted by a firm of undertakers who (in turn) had the government contract to bring bodies from outlying areas lacking refrigerated storage facilities to the morgue in Mt Isa. Apparently the only place to store the corpses in these communities was in the pub coldrooms, and there were any number of health regulations making this a no-no. Given the summer temperatures in these places (I’m talking Doomadgee, Kowanyama etc.) they needed to be taken somewhere to be refrigerated pretty smartly. Hence the use of aircraft.
I wasn’t game to ask for any detail, or whether the passengers/freight were easy to manage. He said it was a good earner and usually trouble-free. He flew alone, and didn’t report any strange experiences.
Anyway, they can use the Citation any time they like. It beats driving which entails a ten hour round trip.
Posted by 1735099 at 13:59 3 comments 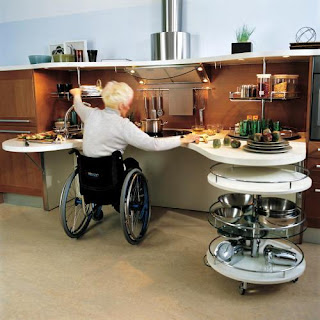 Universal design is a concept whose time has come.
Put simply, following principles of universal design results in manufactured objects that can be used by everyone, have a range of applications and are functional in a variety of situations, are easy to manipulate, user-friendly, not damaged or broken by ham-fisted handling, don’t require strength to operate, and are installed so they can be reached and approached with ease.
Contrast these principles with your last piece of manufactured junk that fell to pieces, ceased to work, or caused you physical or psychic injury.
Consider a piece of flat pack furniture that defied your best efforts to assemble so that it failed to stand up by itself, or had bits left over when assembly was complete. Reflect on a product that was conceived by a stylist sharing a dark corner with a cost accountant, whilst the engineer was kept at arm’s length. Recall a building that was inaccessible to anyone who was confined to a wheelchair or blind.
For the ever-increasing proportion of the Australian population with disabilities, following these universal design principles can make the difference between living independently and having to rely on others for assistance with daily living. Quality of life can be defined as the freedom to manage your living environment without assistance.
Using principles of universal design does not detract from the aesthetics or construction costs of an item if it is made on an assembly line. Providing that the item is designed from the beginning with universal use in mind, extra costs are minimal or non-existent. Adapting objects or buildings after the design phase is what costs – just ask any agency that has had to make a building wheelchair accessible after it has been constructed.
So it’s about time that these principles were embedded into federal legislation. It’s encouraging therefore to read about the national new uniform building code to be introduced this year.
I wonder why it took so long?
Posted by 1735099 at 20:43 0 comments