There may be Micks (and others) out there following this.

I've added the website set up by his supporters in Toowoomba to my recommended sites.
at July 23, 2011 No comments: 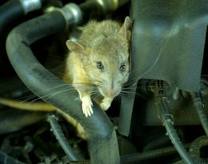 One amongst literally hundreds lining the Warrego Highway between Roma and Chinchilla.

It was flattened by a wide load carried by a contractor on behalf of a mining company.

Well, perhaps not by itself, but when hundreds are bent to the point that they're beyond repair, that must cost TMR a fair whack. There's kilometres of destroyed posts along this road. I followed one of these rigs the other day and watched it happening..

Now TMR's funds are derived from the taxes that you and I pay.

I don't know how you feel about it, but I'm not happy with public property being vandalised by corporations that are heavily subsidised and making healthy profits.

I wonder how far I'd get if I went along the road and systematically destroyed hundreds of guide posts?

It's indicative of the contempt the mining companies show for the environment out here, both built and natural. No wonder the locals call them "locusts".
at July 20, 2011 No comments:

Nostalgia by the Sea

We’ve just returned from a week’s break at Caloundra.
Apart from being about the closest beach to home, for me it’s also a place with lots of fond memories.
Back in the mid-sixties, my dad was the principal of the Landsborough State School. Landsborough’s about 20kms Southwest of Caloundra. With the job came a house, although given that it was a three bedroom cottage, our brood of six created some hassles. It had a sleepout, and as I was the eldest, I drew the short straw.
Fortunately I was away at boarding school for the coldest part of the year, so sleeping outside wasn’t a major issue.
Because we didn’t own a home at the time, my parents decided to buy a beach house at Dickey Beach, Caloundra. This was great, as during the summer holidays, we’d spend all our time there. During the rest of the year, it doubled as a weekender.
At one stage, I held a holiday job of delivering mail at Caloundra. Back then, I’d cycle from Dickey Beach to Caloundra township, prepare my pile of mail for delivery, and have the job over by 10am. I’d then have time to cycle home, go bodysurfing in the middle of the day, and then ride back to town to repeat the exercise. In those days, there were two deliveries per day.
I must have been fit.
I was also stupid when it came to sun exposure, and I’m paying for it today.
When I started on the mail run I decided to use my own bike, as the Post Office machines were heavy and clunky. They did, however, have very good brakes. My steed, which I’d actually built myself out of bits, had a hand braking system I took off another bike which sort of worked in the dry. It was next to useless in the wet.
On my third day of the first week, it rained heavily. I found myself at the highest point of town, near the lighthouse, with a full load of mail in two saddle bags, one each side of the back wheel.

I set off down the very sleep slope to begin my delivery run. Halfway down, I applied the brakes, as there was a busy intersection coming up. There was no perceptible decrease in velocity. Thinking quickly, I decided to abandon ship by jumping off and rolling on to the grass.
At least this was the intention. What actually happened was that the bike reared up (as a consequence of the heavy saddlebags) and sent me sprawling on my backside. It then hit a fence, looped over it, and sent the mail sailing down the street, all bundled up in rubber bands, one bundle for each street.

I was lucky in two specifics. One was that very few people actually saw the incident, and the few who did took pity on me and helped collect the mail before it turned into papier mache as a consequence of the teeming rain.
That was the last time I used my own bike.
Caloundra has changed a bit since then.
So have I, but definitely for the better.