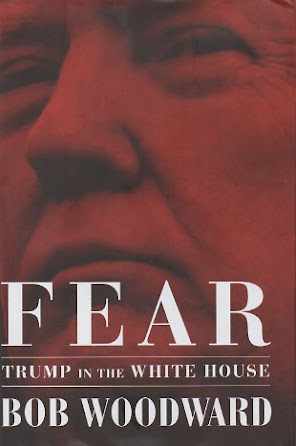 It's a while since I've posted a book review, gentle reader, so I'll make amends with this one.

The author, Bob Woodward, has impeccable credentials as an investigative journalist. Along with Carl Bernstein, he produced extensive and forensic reporting on the Watergate scandal, which led to the resignation of Richard Nixon.

He has also written 19 books on US politics, most of them best sellers.

He is a navy veteran, and a Yale graduate and his writing style is direct. His style reminds me of the work of a good police roundsman - no nonsense and sparse.

Because of his celebrity status, Trump was happy to give him unfettered access and he has used it to good effect.

Woodward's narrative recounts some gobsmacking behaviour, not only on the part of Trump, but also on those working for him. He cites examples of senior officials hiding memos by removing them from Trump's desk. They were doing this, because they believed he had absolutely no idea of the consequences of policy decisions made on the basis of many of his decisions, which seemed to be driven by whims or obsessions. His termination of the Korea Free Trade Agreement was a case in point.

Trump was determined to abolish it and a memo was drawn up to that effect. The paperwork was hidden, until he could be persuaded to modify, rather than terminate it. In this case the strategy worked. (Trump had roundly condemned the agreement prior to election).

Trump's senior officials were also bewildered with the freedom he gave his family in terms of access and decision-making in the White House. Woodward recounts Trump's daughter Ivanka's indignation at being told she was "just a staffer" by Steve Bannon, who at the time was Trump's Senior Counselor.

Bannon had a strong agenda of his own, and Woodward claims he used Trump to advance it. This seems to have been borne out subsequently by Bannon's fall from grace, and most recently his indictment on charges of conspiracy to commit mail fraud and money laundering in connection to the We Build the Wall campaign.

Trump has bulldozed through a bewildering array of advisors and political appointees.  The turnover rate is unprecedented. The more notable include National Security Advisor Michael Flynn, White House Chief of Staff, Reince Priebus, White House Communications Director Anthony Scaramucci, and Secretary of Health and Human Services, Tom Price. Their tenures have been brief and chaotic. By May this year, there have been 415 White House staffers dismissed or resigned.

Woodward puts this down to Trump being unprepared to continue to employ anyone who disagrees with him. He paints a picture of senior military men, such as James Mattis and H R McMaster being unwilling to kowtow, and leaving the administration as a result.

Perhaps the most telling reflection on Trump's style is this quote -

Today I publish a letter read out in Federal Parliament on June 11th 1970 by Norm Foster, member for Sturt, as part of a grievance debate. He wrote to John Gorton, Prime Minister at the time.
The letter was written by Stan Larsson, whose son had been killed in a mine incident in Vietnam on 6th June 1970. He was a member of 7 RAR, my unit in Vietnam. Stan had written to Andrew Peacock, the Minister for the Army, prior to 7 RAR's embarkation, in an attempt to have his son posted to a non-operational unit as he had poor eyesight, requiring him to wear very thick glasses.
Although records of the incident show it wasn't Stan Jnr who actually triggered the mine, like the other three soldiers involved (two who were killed, and one seriously wounded) he didn't see it. There had been heavy rain the night before the incident, and the humidity was very high. In those conditions, it was almost impossible to prevent glasses from misting up.
Thirty years ago you and I were engaged actively in a conflict on an issue that was beyond doubt. We fought for freedom from individual oppression and tyranny, and I was proud to be an Australian.
A short while ago,  I was informed that my son was killed in action in Vietnam.
In Vietnam there emerged a terrible armed struggle between the peoples of one race - father against son, brother against brother, each fighting desperately for principles I no longer understand, but it was a family struggle, which in the final event will only be resolved between the people of Vietnam.
Yet, into this conflict, Mr Prime Minister, powerful neighbours intruded, and so you committed Australia. You felt that by armed force, your ideals might be thrust upon these people. Through your intrusion, you and your colleagues introduced into Australia, the very principles against which I was prepared, with others, to die if necessary.
This is your Australia, Mr Prime Minister, and I no longer have pride in being an Australia.
Into the conflagration that is Vietnam, you sent my son, a man whom you knew without his glasses, could not see a hand held four feet away , or a car at 30 feet, and whom you told could see reasonably well with glasses. You advised him to keep them clean, yet in the torrid humidity of Vietnam, you could not tell him how.
He went, Mr Prime Minister, because you told him it was right and honourable.
Was it, Mr Prime Minister? Why? For Whom? A thousand questions flood my mind.
How do I answer his young widow, or my children? Did he die to further the political ambition of yourself or your colleagues? Or was it to ingratiate yourself upon the leaders of the most powerful, yet most hated and feared nation in the world today? Do I answer them that it is the cowardice of men too proud to admit to a horrible tragic error? Wherein lies the truth, Mr Prime Minister, and how long must this carnage of Australian manhood continue? How many more must die under the conditions you have chosen to impose. What is the truth? Why? For what? In the depthless horror of sorrow and grief I turn to my friends and ask, but none can tell me, none can answer, so I must turn to you.
Perhaps if in the interests of human justice, and of truth, the news media and journals of our day can find the courage to publish my letter to you, I may find truth, or perhaps, Mr Prime Minister, time may show that my son did not die in vain.
Stan Larsson
Shortly after this letter was read on the floor of parliament, and reported by the media, all soldiers with glasses in front line service were removed to rear echelon postings. One of them was Keith Connell from my rifle section, who was posted to 1 ALSG at Vung Tau as a clerk.
Keith died last year, in August, from multiple myeloma, a well-know outcome of Dioxin exposure. Agent Orange was used heavily around ALSG to remove vegetation from the perimeter of the airstrip.
Comments closed.
at October 11, 2020 57 comments: