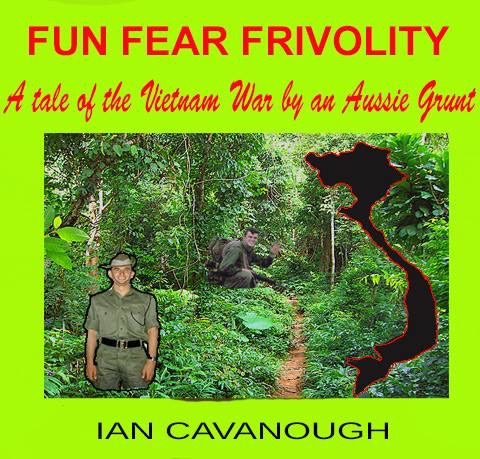 Today is the anniversary of the battle of Long Tan, so it's fitting to post something relevant.

In this case, gentle reader, I've opted to review an eBook released recently by a Vietnam veteran called Ian Cavanough who served in 2 RAR in 1970-71.

The book is called "Fun, Fear, Frivolity", and it is well worth a read, whether you're a veteran or not.

Ian (better known as "Cav") has put together a memoir tracing his training, service in SVN, and return to Australia. His descriptions of recruit training are alternatively hilarious, accurate and bizarre.

Looking back on it, that is exactly how rookie training was. I doubt it made much difference whether that was at Singleton, Kapooka or Puckapunyal, the three recruit training bases. Cav captures the atmosphere, the development of confidence and camaraderie, and the daily experience of training very accurately.

His recount of his Vietnam experience is fascinating. Although he states on a few occasions that he can't write about his emotions, the force of the narrative actually captures the feelings of the young diggers very well. Nothing is stated, but the descriptions are so vivid and stark, that most readers would be captured by the his account and feel for those involved.

Although Cav is very self-deprecating about his writing, his capacity for accurate recall, vivid description and gentle humour make his work very engaging. His use of maps and photos taken during operations add to the immediacy of the narrative.

His experience as an infantry soldier on operational service during the latter stages of Australia's involvement in the conflict is shared by thousands of diggers, but given the nature of counter insurgency warfare it is unique to Cav as an individual.

For most Australians at the sharp end in Vietnam at the time, jungle warfare was very much a small patrol operation, and no two soldiers saw the same situation from exactly the same perspective. Cav captures his experience and that of his section and platoon with riveting detail and wry observation.

An unexpected bonus for me was his description of the operating environment, particularly the flora and fauna. For me, old experiences and images were dragged out of the recesses of memory and relived. Most of the accounts of the experience I've read down though the years (and I've read most of them) lack this wealth of detail.

There are many cliches, myths and misunderstandings about this most divisive of conflicts. Through it all, the stubborn valour of the diggers, whether national servicemen or regular soldiers, renders all this background as irrelevant - as white noise.

This memoir is an important contribution to the body of work still being produced by those who actually lived the experience of the war. It is authentic, immediate and engaging.

Get yourself a copy - whether you're a veteran or not.

Go here to find out how you can do that.